Today’s Wednesday Weirdness piggybacks off last week’s post about Thunderbirds, and the disappearance of a Pennsylvania farmhand named Tom Eggleton. If you missed it, you can find it HERE. Many of the townspeople where Tom lived were convinced he’d been carried off by a Thunderbird. Why?

Perhaps they’d seen a photo supposedly circulated in 1890. I say supposedly, because no one—up to the present time—has been able to find the photograph despite thousands of people who remember seeing it, and numerous publications which insist they published it.

If you’re scratching your head, let me backtrack.

In April 1890, two Arizona cowboys (or prospectors, depending on who is doing the telling) shot and killed a pterodactyl-like creature. The enormous bird was featherless with smooth skin, a head like an alligator, and a wingspan of one-hundred, sixty feet. The two men loaded the creature into a wagon and hauled it into Tombstone, where it was nailed, wings outspread, across the entire length of a barn.

The Tombstone Gazette ran an article about the incident on April 26, 1890. No photo.

In 1963, a writer by the name of Jack Pearl—while recounting other large bird sightings in Saga magazine—stated the Gazette published a photo of the “Tombstone Thunderbird” in 1886. Notice the discrepancy in the dates.

Also in 1963, a correspondent for Fate magazine would claim the photo had been published by the Gazette—and countless newspapers across the country. Still others claimed to have seen the photo in Saga or Fate. Others in magazines devoted to the Old West. 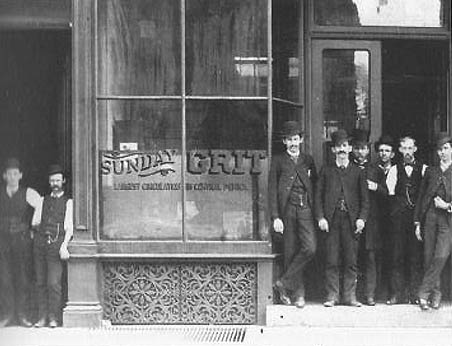 Grit was one of the newspapers thought to have published the Thunderbird photo. This is the Grit office as it looked in the 1890s: Image courtesy of Wikimedia Commons unknown; uploaded to the English language Wikipedia by Pepso in February 2006 (file log). [Public domain]

Biologist and writer, Ivan T. Sanderson said he loaned a photostat of the image to an associate who lost it. Mothman Prophecies author, John Keel, was certain he’d seen the photograph in a magazine; there was even talk of it having been shown on a Canadian television show devoted to the supernatural. With more and more individuals claiming to have seen the photo, staffers at the Gazette searched their archives. Other newspapers and magazines did as well, but the photo has never been found.

So how could so many people have such distinct memories of something that doesn’t exist?

The “lost” Thunderbird photo is an example of a shared false memory most commonly called the Mandela Effect. Named for former South African President and philanthropist, Nelson Mandela, the phenomenon occurs when a large group of people recall something that never happened. Nelson Mandela passed away in 2013, but many people distinctly remember him dying in prison in the 1980s.

Author and paranormal researcher, Fiona Broome, coined the phrase in 2019, and runs a website devoted to it. Here’s a list of some cool “Mandela Effect” items that may make you realize you’ve shared a false memory.

And, finally about that thunderbird photo…I can’t find one in free use, but you can check out an example of it HERE.

When you’re all done browsing around, come back and share your thoughts in the comments. I’d love to know you think about the lost photograph and the Mandela Effect.

68 thoughts on “Wednesday Weirdness: A Missing Photo and the Mandela Effect”