Hey, friends—don’t you just love looking at book covers? I do, and always get excited whenever someone I know has a new cover to unveil. Today, I’m delighted to host friend and Story Empire colleague, Craig Boyack, for the red carpet roll out of a sparkly new book cover! 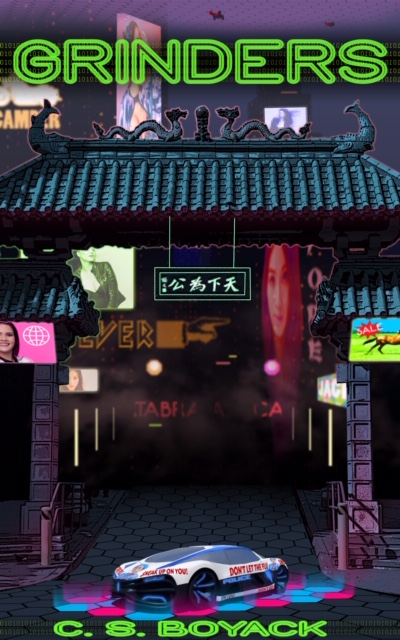 I’m here to reveal my newest cover and talk a bit about Grinders. This time, I’m tackling a cyberpunk world. It’s one of those worlds where the Internet and being connected too much controls our lives.

One of the things I like about science fiction is the ability to project current events into the future. I call this, “Poking things with a stick.”

I poked a lot of things in this book, but most of them are in passing. Some of them show up in advertisements, which are invasive in this world. Others might just be a news blurb. There are times when I dive a bit deeper, and not everything is negative. Here is a small list of things that show up in the story:

There are a lot more, and most of them are pretty subtle. Cyberpunk is not known for deep plots, but I wanted one anyway.

Grinders is set about a hundred years in the future, in San Francisco. The main characters are cops assigned to the Grinder Squad. This is the duty nobody wants, and you almost have to screw up to get this assignment.

Grinders exist today, but I ramped them up for this story. These are people who surgically modify themselves, or each other, in basement surgeries, beauty salons, and tattoo parlors. Real world examples are those who implant chips under their skin to allow themselves to unlock doors or start cars without a key. There has even been one who injected dye into his eyeballs in an attempt to see in the dark. In that example, it actually worked but the results were temporary.

My story involves the downside of these modifications, why they’re illegal, and most of them are a bit more extreme than the real world versions. For example, you’ll meet Brandi, who has moth-like antennae implanted into her forehead. They aren’t just cute, they allow her to taste virtually everything. She’s almost like a bloodhound, only using the sense of taste.

Grinder Squad rarely ever does anything, but the new girl on the squad, Jimi, wants to bust a grind shop in the worst way. She feels like it could be her ticket off this crap detail and on to better duty.

One of my silly goals was to release the book in time for Chinese New Year. I’m not going to make it. I still need to finish my final pass, send it to the formatter, and get my promotional posters. It’s going to need a blurb, too.

Readers won’t actually care about my silly target date, and it’s more important to give everything the final polish. What I did get in time was cover art. So Gong Hei Fot Choi, everyone, and enjoy the cover. The story will be available before you know it, and I’ll announce that on my blog.

I’m really looking forward to this one! I got a sneak peek of it, and the story is unbelievably imaginative. That’s always the case with Craig’s work, so I recommend keeping your eyes peeled for news of Grinders release. I know I am!

Please help Craig out by using the sharing buttons below!