Wow! It’s a New Year and I’m thoroughly jazzed to start off the week with my first review of 2020! Although I read these book in December, I didn’t want to share them during the hustle-bustle of Christmas for fear they would get overlooked in all the festive merriment. 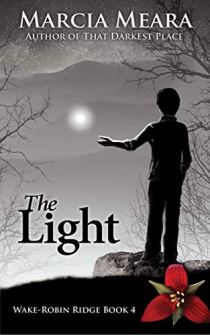 I have read and enjoyed all of Marcia Meara’s Wake Robin Ridge books, but The Light, is quite possibly my favorite. Rabbit­—a very special eleven-year-old boy who grew up in Appalachia, now the adopted son of Sarah and Mac—takes center stage yet again. Gifted with “the sight” which allows him to see future events as well as “read” others, he is wise beyond his years. An old soul who has a unique way of viewing the world, he has a folksy charm that resonates with every word he utters. Meara’s gift of writing him is exquisite, and despite numerous well-rounded and lovable characters, it’s Rabbit who steals the show.

I adore Mac and Sarah—mostly because of Rabbit’s pure-hearted love for them, and their utter devotion and fierce protective love for him. I’m enamored of several new characters who make their debut in this book—especially Austin—but once you meet Rabbit, you’re eternally smitten. No two ways about it. He’s a character who lingers long after you’ve read the last paragraph.

An added bonus is the inclusion of the Brown Mountain Lights, an unexplained phenomenon that has long fascinated me. Meara does an excellent job of weaving their appearance into a multi-layered plot which covers the gamut from high-brow society to misguided con artists.

If you like family stories with plenty of warmth, ­­­threads of the supernatural and folklore, plus a well-plotted mystery, don’t miss the latest in the Wake Robin Ridge Series. Five big glittery stars!

Someone recommended this book to me, and I found it to be an intriguing read. Originally published in 1884, it is somewhat dense—you won’t breeze through it—but also highly interesting. The author starts at the Beginning. And I do mean THE BEGINNING, as in prior to when God said, “Let there be light.”

Pember takes the reader through the creation of Earth, the Fall, life outside the gates of Eden, the sin of Cain and the rise of Watchers or b’nai ha Elohim (“sons of God”) who mingled with humans, resulting in the birth of the Nephilim, half celestial, half human beings. All from a Biblical perspective.

He offers the belief that Nephilim (as well as Principalities of the Air) were the ancient gods of Babylonia, Egypt and Persia, as well as the gods of Rome and Greece. But there’s much more, including a close look at life leading up to the Great Flood. Later, he addresses how the sorcerers of Ancient Egypt were able to duplicate several of the plagues Moses—through God—inflicted on Pharaoh and the Egyptians.

Earth’s Earliest Ages, was written in a time when Spiritualism was exploding. The first half of the book is devoted to studying Old Testament events and comparing Pember’s day to the days of Noah. The last half of the book takes an in-depth look at Spiritualism, Theosophy, and Buddhism. Although I found the section on Spiritualism interesting (due to the amount of research I did on sham aspects of the religion for a novel), I waded through the chapters on Theosophy and Buddhism. That aside, Pember offers up several interesting theories and backs them from a Biblical perspective. Despite being published over a century ago, the text has been updated through multiple editions, and still resonates with the state of our world today in many ways. 4 Stars.

The Whisper Man
by Alex North 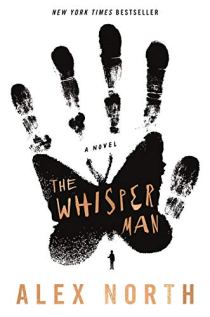 Chalk this up to one of my favorite reads of the year! After his wife dies unexpectedly, Tom Kennedy moves with his young son, Jake, to the tiny village of Featherbank in an effort to start fresh. Jake is a sensitive child, prone to talking to an imaginary friend. At first things appear to be moving in the right direction, then Tom learns that he and his son have moved into the neighborhood “scary house.” Worse, Featherbank is also the site of several child abductions and murders decades in the past. The serial killer responsible was known as the Whisper Man due to a habit of whispering to his victims outside their bedroom windows. Just before Tom and Jake settle into their new house, a young boy goes missing. Then Tom overhears Jake reciting part of a rhyme: “If you leave a door half open, soon you’ll hear the whispers spoken…”

Where to begin? This is a highly suspenseful, creepy read with intricate layers. Not only do we have Tom and Jake—with Tom struggling on so many levels to be the father Jake needs—but two detective inspectors are also front and center. DI Pete Willis is the man responsible for bringing the Whisper Man to justice decades ago, and DI Amanda Beck is the lead on the current abduction case. A case that bears eerie similarities to the Whisper Man’s crimes.

Twists and turns? Oh, yes! I smugly thought I had part of the story figured out early on, only to have the proverbial rug wrenched from under me. Plus, there are HUGE surprises in store. WOW moments that induce goosebumps. I’m in awe by how expertly the author wove everything together.

Originally, I was a little cat-shy about reading a story that involved child victims, but there is nothing graphic here. The past is only touched on in a sinister, but distant way. What makes this book so unforgettable is the atmosphere North conjures in most every scene—like a storm waiting to break. The creep-factor is subtle, but deliciously wrought, and the ending delivers another jaw-dropper. If you like well-written, tightly plotted, suspenseful reads with a hint of eeriness, don’t pass up The Whisper Man. I highly recommend this one! Five whopping big stars!