Hi, friends. Given next Wednesday is Christmas, this will be my last Wednesday Weirdness post until we enter the New Year. I love the holidays, and am pretty much a sap the entire month of December. With that in mind, I thought I’d share legends related to Christmas Eve. But be warned—not all are warm and fuzzy.

The celebration of Christmas touches each of us in different ways. For me, it is a religious holiday. Also a time for gathering with family. There is a special magic that occurs at Christmas, an enchantment of being that is spiritual and mystical. The power of believe!

The Eve of Christmas is noted for many old world superstitions and beliefs, among them the idea the veil between worlds grows thin allowing the departed to return to the homes of loved ones. 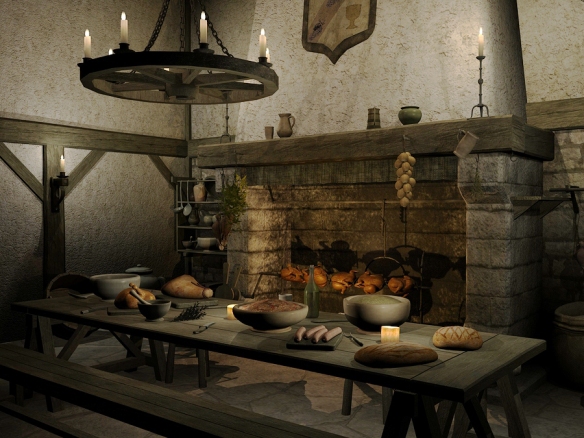 In Scandinavia, people prepared feasts for the spirits, setting a table laden with holiday fare. They had their own festive celebration first, then before retiring for the night, made certain all the bowls and platters were refilled and heaped with food. Jugs brimmed with Yule ale, and a fire was set in the hearth. Chairs were wiped clean of debris with a white cloth. The following morning the cleaning process was repeated. If a bit of earth was discovered, it was considered proof-positive a visitor from the grave had stayed to enjoy the repast.

Another myth related to Christmas Eve involved animals. At the stroke of midnight many believed animals could speak in human voices. The downside? Whoever overheard an animal talk usually met with an untimely end or some other dreadful circumstance.

In Europe it is said cattle kneeled to worship the new-born King, and that bees came together in great numbers to hum a Christmas hymn.

The creepiest legend I found involved a blacksmith. On Christmas Eve a bell tolled, beckoning all the people of the man’s village to midnight mass, but he ignored the summons and continued to work. Not long after, a stranger arrived. Tall, but stooped over, he asked the blacksmith to add a nail to his scythe. When the blacksmith finished the task, the stranger told him to summon a priest for the work would be his last. The next morning the smitty perished, never realizing he had repaired the scythe of the Grim Reaper.

Are you familiar with any of these legends? Do you have others to share? Let me know in the comments. Whether you discover talking animals, friendly phantoms come to call, or just the good cheer of family and friends, I wish you a blessed and merry Christmas Eve!