…doesn’t always stay in Maine. In this case, I brought back a cold.

Not just any cold, but a miserable head cold complete with sore throat, sneezing, coughing, watery eyes—I can’t remember the last time I felt so sick. It started a week ago Monday night while we were in Freeport. By the time we returned to our lake house outside of Bar Harbor on Tuesday, I was going downhill fast. By Wednesday, we decided to cut our vacation short and head home.

Thankfully, we squeezed a lot into the time we were there. We spent two days in Bar Harbor, a day in Freeport, and enjoyed the serenity of the lake house. We ate at a lot of great places (lobster and seafood!), met some wonderful people, took a 2.5 hour nature cruise with views of seals, porpoises, the Egg Rock lighthouse, elaborate mansions, cliff faces and islands. In addition, I did a ton of shopping. So although the trip was cut short, we still had an awesome time.

The house was amazing, with a soaring two-story coffered wood ceiling and two rows of trapezoid windows plus two sets of French doors overlooking the lake. We loved relaxing each evening on the deck and watching the sun set. Peaceful—and very remote. 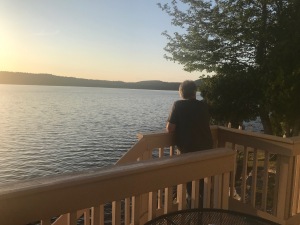 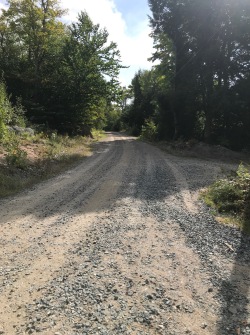 A mile drive on dirt and gravel to reach the house

The property sat back from the main route several miles. We took a country road four miles back off the main drag, then turned onto a dirt lane where we drove another mile through woods before arriving at the house. My phone cut out before we even turned onto the country road. Not having cell signals or a land line (and no one around) was kind of freaky but the setting was so peaceful, it was easy to overlook.

The next day we hit Bar Harbor, which was a 45 minute drive away. A great place, but it was PACKED with people. We spent two days walking the town. It’s loaded with all manner of eclectic shops and eateries, and is located on the water. Each day a cruise ship arrived and water-taxied passengers into town. We heard a lot of English accents in the shops. When afternoon rolled around, we grabbed a beer in a brew pub. I’m more of a wine drinker, but even I thought it was good. I couldn’t fit my glass in the selfie I snapped (at left). 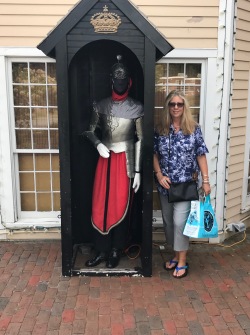 We spent an entire day in Freeport, where a highlight was visiting the L.L. Bean Flagship Store. This thing is humongous. It’s the anchor store of the L.L. Bean Campus, which includes separate stores for hunting and fishing, bike, boat and ski, a home store, and a discovery park. We only ever made it into the Flagship store, and I’m not sure we even made it through the whole thing. I bought two sweater coats and DH bought two down vests. The really interesting thing about this store is that it’s open 24/7, 364 days a year. The only day the store closes is Christmas. Other than that, you can shop any time or any hour.

At the British Goods store (on left), I had to stop for a shot with a friend.

Later, during the trip we discovered our left rear tire was leaking. We’d chosen to use a rental car rather than put mileage on one of our vehicles given it was a 11.5 hour trip one way, and while in Maine we planned to do a lot of driving. Freeport was a 2.5 hour trip from the lake house where we stayed. We did book an overnight for that, but given the location of the house, everything we did was at least a half hour to fifty minutes away. Turns out we picked up a nail somewhere, which meant finding a garage to remove it and plug the hole. We tried three before we finally found one who could take care of the problem. The guy was a man of very few words (I think he probably spoke a little over a dozen the entire time we were there), but he was a lifesaver. No way could we have driven 11.5 hours home with a tire leaking air.

Among the people we met, Millie in Freeport really stands out. DH and I were relaxing after dinner with a drink at the outdoor fire pit, when Millie came out and joined us. We spent the entire evening chatting with her. She was an older woman, traveling from Massachusetts with her husband (he had already headed up to their room), and a sheer pleasure to chat with. We connected with so many enjoyable people on the trip, all of who will remain part of our memories. Despite having to head home early, we squeezed a lot into the time we were there, and look forward to returning at a later date.

We were expecting autumn temperatures, with most all of the clothing we packed suited for mid 60s weather. Fortunately, we each packed some lighter items as well, as the days were unseasonably warm in the mid to upper 80s. We did get to see an array of beautiful fall foliage, but the peak color comes later this month. No moose sightings, but several moose crossing signs. I tried to snap a picture of one from the highway but it came out as a brown and yellow blur.

No cryptids either, but the surroundings were inspiring. I dreamed up an extensive character list and plot for a story which I’ve decided to make my upcoming NaNo project. I can’t wait to get started!

In closing, I’ll leave you with some photos taken while in Bar Harbor. It’s definitely a cool place to visit! Starting next week, my Wednesday Weirdness posts will begin. I hope you’ll join me for a weekly dose of strangeness!

52 thoughts on “What Happens in Maine…”