Hi, Friends! I’m back from Maine and eager to catch up with everyone. I’ll be chatting more about my trip to the Pine Tree State tomorrow, but first, I’d like to share this week’s book reviews. Ready? Let’s dive right in! 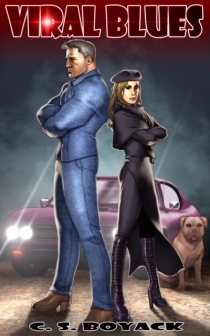 Viral Blues
by C. S. Boyack
When nefarious forces tamper with the population’s vaccine supply, substituting lethal viruses in place of inoculations, a group of players with unique gifts unites to bring down the supernatural forces responsible. Think a mash-up of superheroes, zombies, and music, and you’ve got a hint of the fast-paced and highly imaginative story that comprises Viral Blues.

Our group of power players includes an ex-thug who hasn’t lost his knack making people talk, a sexy, brilliant robot girl, a street savvy detective with a habit of evaporating into fog, a girl as handy with pistols as she is fronting a band, and an extra-terrestrial being in the guise of a hat. Yes, a hat.

Boyack gives each of these colorful characters (and more) a chance to shine in his high-octane tale. Our heroes battle hordes of zombies, organized crime bosses, and supernatural bad guys. The action sequences are peppered with near escapes and shoot-outs, and the dialogue flies as fast as the bullets (I love the hat’s snarkiness). Most all of these characters have appeared in other books and novellas Boyack has written, but tossing them together in a melting pot was a stroke of brilliance. I loved watching them interact, particularly Lisa, the robot girl (a favorite of mine) and Clovis, the thug. The hat pretty much steals every scene he’s in (did I mention I love his dialogue?).

The climatic confrontation is explosive and should be filmed. If you like imaginative stories, memorable characters, and superhero theatrics, you’ll love Viral Blues. As an extra treat the author adds a secret chapter at the end, much like the final in a movie after the credits roll. Highly enjoyable! 5 Stars!!

Nine Lives
by Jaye Marie
In Nine Lives, we meet Kate, a fifty-nine-year old artist who has had a wretched string of bad luck when it comes to men, and who is now going through the motions of a day-to-day existence. She has health issues, smokes too much, and is plagued by an inner voice that constantly monitors her decisions.

Much of the story is written in expository style, admittedly not something I am used to. The reader is treated to a lot of background information about how Kate’s life has evolved and how each day unfolds. She’s made mistakes, bad choices she now recognizes, and has been taken advantage of by more than one man. Kate hopes the worst is behind her—especially now, with a female mentor and friend who offers the steadfast support she has been lacking. Sadly, there are still hurdles to overcome, the toll of which becomes evident when several in Kate’s orbit meet with foul play.

The writing is crisp, the descriptions vivid. Dialogue, when it appears, is well done, although the bulk of the book relies on narrative. I did find several of the scenes difficult to read and had to skim them. That aside, the author did an excellent job in creating a thoroughly reprehensible villain, who I couldn’t wait to see reach a justifiable end.
4 Stars.

Here to Stay
by Mark Edwards
It’s every newlywed’s hope for wonderful in-laws. In the case of Elliott, a mild-mannered science teacher, his neat, orderly life is turned upside down by the in-laws from hell. A chance encounter with Gemma ends with her saving his life. Four months later, they’re married, and shortly after that, Gemma asks if her parents can move in for a few weeks. They’re coming back to England after being in a France for an extended time and have no place to go.

Having recently finished the remodeling work on his dream home and eager to meet his in-laws, Elliott is happy to oblige. Jeff and Lizzie Robinson arrive along with Gemma’s younger sister, Chloe, who appears almost catatonic. It’s unclear why the three left France—which seems to have been in a hurry—or how they managed before they did. Gemma is tight-lipped and jittery around them, and barely acknowledges her sister. Although Chloe eventually comes out of her shell, it becomes evident Jeff and Lizzie have no plans of moving.

They settle in like squatters. Much like parasites or roaches who invade and take over. These two are revolting—obnoxious, gross, filthy, loud, rude, utterly repellant. Jeff is a bully, Lizzie a piranha. Gemma refuses to stand up to them and avoids them whenever possible even as they start to trash Elliott’s home. They’re brazen enough to haul in paint and start arranging furniture to their liking (side note: if you think the law should be involved, that’s addressed).

Frustration? Yes! I was irritated with Elliott for being so blind about what was happening and refusing to take a firmer stand. He is a likeable protagonist, one who garners sympathy from the reader, but someone you want to see take forcible action. When that moment finally arrives, it’s not in the way I would have expected. But this is a Mark Edwards psychological thriller which means there are going to be numerous curveballs. In that respect, the author delivered several. If that’s not enough, he tossed in a few mysterious murders early in the book for good measure.

Here to Stay is a story about what people will resort to when pushed to the breaking point. This is dark psychological fiction—darker than I would normally choose to read. I’ve been a fan of Mark Edwards for a long time, which is why Immediately grabbed the book upon release. Well written, well-told, and certain to wring a host of emotions from the reader, it’s a gripping tale with a dramatic ending. 4.5 stars.

Have you read any of these? How do they sound to you? I’d love to get your thoughts in the comments!