Can you believe we are already over two weeks into August? Summer is speeding by on a rocket ship.

Speaking of rocket ships—and by default space travel—it isn’t a stretch to make the jump to aliens. Today, my guest, Straci Troilo, is serving up two crazy good books, written under her pen name, D. L. Cross. How do I know they’re crazy good? Because I’ve read them both and gave them resounding 5-star reviews!

Staci is a good friend, a talented author, an editor, and a colleague at Story Empire. If, by some impossible hiccup in the universe, you’re not already following her blog, I encourage you to visit her corner of the blogosphere and hop along for the ride.

And now, that I’ve jabbered enough, here’s Staci to tell you about her latest CRAZY GOOD books! 😀

Hi, Mae. As always, I appreciate the warm welcome. And everyone else, hello! Thanks for giving me a few minutes of your time to talk about the Invasion Universe.

If you know me and my early body of work, you know me as Staci Troilo, author of suspense fiction mashed up with romance, paranormal, legal, medical, and/or family drama. I can’t help adding anxiety-ridden situations to the works I write, regardless of the genre.

Which brings me to my latest endeavors. I’m now writing sci-fi.

When I made the jump to science fiction, my publishers insisted on a pen name. (They’re much more conscious of the “also-boughts” on Amazon than I am.) I used to resist writing with different pen names for different genres because I write in so many of them and didn’t want to manage several identities. Turns out, it’s not that difficult. And (if their theories are correct), it’s probably beneficial. At least on some level.

But what I found surprising is my work didn’t change. I’m still writing suspense. Only now, instead of megalomaniacs or serial killers stalking my heroes, aliens are. Actually, that’s not entirely true, either. Sometimes the villains are aliens. Other times, they’re still humans with nefarious agendas.

I have to tell you, I don’t read much sci-fi. But I love it on screen (small or big). Especially space-oriented shows and films. TV series like Lost in Space, Star Trek (original and TNG), Stargate (SG-1 and Atlantis), Roswell… I get lost in them every time they’re on. And movies? I’m hooked. All the Star Wars episodes (even the bad ones), Star Trek (yep, it’s on both lists), Stargate (yes, it made both lists, too), Independence Day, Close Encounters of the Third Kind, E.T., Avatar, even Mars Attacks (there’s nothing wrong with humor—even ridiculous humor). The lists are endless. I watch as many as I can. And I love most of them.

The cinematography is usually engaging; the world-building enthralling. But what really draws me in is the characters. Regular people fighting larger-than-life enemies against impossible odds. Who wouldn’t want to watch that?

Who wouldn’t want to read it?

That’s why I made the switch to science fiction—because the genre is wonderous. I was still able to tell my kind of stories with my kind of characters. But now, I get to do it in an alien-rich world.

If you read my Astral Conspiracy series, you’ll find aliens—beings with all kinds of advanced tech and inhuman abilities. You’ll also find a lot of history. I have to admit, Ancient Aliens is a guilty pleasure of mine. Not because I believe their theories, but because of all the amazing places the show’s hosts go and the lore they uncover. I know, it’s weird to think of ancient history melding with futuristic science, but I did it. And early reviews suggest the combination is working.

I hope it is. And I hope you agree. If you give it a try, please leave a review and let me know what you think.

And if you like ancient astronaut theories, you may like The Gate, the first novel of my quintet. 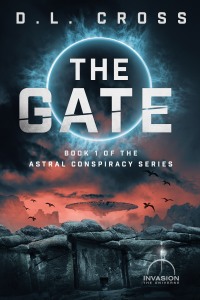 He lost his job. Lost his girl. Now it’s all he can do not to lose his life.

Landon Thorne is a disgraced archaeologist, a laughing stock in his field because of his unconventional beliefs – he’s an ancient astronaut theorist. No one takes him seriously.

Until an alien armada targets Earth.

Now Landon’s in high demand – by the US government and someone far more sinister.

They race across two continents to the Gate of the Gods, the one place on Earth that might give humans an advantage over the aliens. But no one is prepared for what they’ll find.

And not everyone will make it out alive.

The aliens have landed. The humans are panicking. The scouts have been sent.

J’s mission is clear — find an alien outpost, observe, report back. Simple enough. It’s what he’s trained to do. But he’s always worked with his team, never as a party of one. Now he’s been sent out alone to blindly navigate a dense, dark forest until he finds his target. The dynamics are foreign to him, the stakes never higher. He’s completely isolated. Resources are scarce. Comms are down.

And he’s found the enemy.

It’s imperative he’s not caught, but clandestine spying doesn’t yield enough intel. J needs an ally, someone on the inside of the camp who can feed him information. And he finds one. But he gets more than he bargained for with Aria.

Their relationship grows complicated. Her people get defensive. His superior becomes suspicious. He doesn’t know who to trust. His loyalty’s divided, and pressure’s mounting from all sides.

J is shocked when everyone’s true allegiances are revealed. And the consequences of betrayal will be deadly.

Bio:
D.L. Cross has loved science fiction ever since she was a young girl and fell for Major Don West on television’s Lost in Space. To this day, she still quotes the show, though her favorite lines were spoken by the robot and the antagonist. Parallel universes or alternate realities, aliens or dinosaurs, superpowers or super viruses, time travel or AI… no sci-fi theme is off limits and all of them fascinate her. D.L. Cross also writes other genre fiction under the name Staci Troilo, and you can find more information about all her identities and all her work at her website: https://stacitroilo.com.

I loved so many of the television shows Staci mentioned in her post, plus many others. I remember reading my first science-fiction novel in the fourth grade and being immediately smitten. As someone who’s loved science-fiction from a young age, it’s been a pleasure to discover a new universe populated by remarkable characters and riveting story lines. As I said in my review of The Scout, “You can’t go wrong with anything from the pen of D.L. Cross!” Still not sure?

Check out my review of The Gate, too, then go forth and one-click these wonderful titles! 🙂