I’m back again with the second half of my reviews for June. If you missed part one, you can find it here. Summer is a huge reading time for me, with pool season the perfect opportunity to float on a raft with a paperback or my Kindle (have to be extra careful it doesn’t fall in the drink). These are the books that rounded out the second half of the month for me. To read the official blurbs and learn more about each, just click the Amazon link below each review. 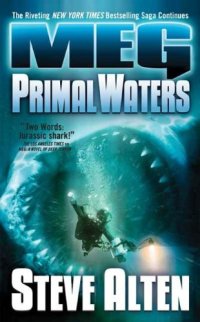 Book three in the Meg series launches with an intriguing premise. It has been eighteen years since Jonas Taylor last crossed paths with a colossal Carcharodon megalodon, a.k.a. “Jurassic shark.” At sixty-four, he’s the father of a soon-to-be eighteen-year-old daughter and a slightly younger son. Along with his wife, Terry, he’s juggling family and mounting bills, when he gets an offer he can’t refuse—doing commentary on a reality TV survival show called Daredevils.Taking the job means going to sea for six weeks, his daughter in tow, along with a film crew and an adrenalin-fueled cast of thrill seekers. But all is not on the level, and there is more than one Meg haunting the Pacific, presenting separate challenges for each member of the Taylor family.

Once again Alten knows how to ramp up the excitement. The book starts off with a slow burn, the reader knowing there is more behind the Daredevils offer than meets the eye.

There are also plenty of opportunities for various Megs to answer the dinner bell. The Daredevil characters—good and bad—are all well drawn, and the reality TV angle adds a great edge. I particularly loved when Jonas intentionally flubs the name of the show’s airhead host after she repeatedly goofs his. Small things like this add flavor to the book, especially given the high-octane action scenes. I do wish Jonas and Terry weren’t always fighting off unwanted sexual advances (a theme in the last two books), but those small distractions aside, this is summer popcorn reading at its best. More than one Meg invades the Pacific. Give those sharks 5 stars!

Red Eyes in the Darkness
By D.L. Finn

This is another entry in the author’s evildwel series, which addresses the balance of good and evil across mortal and supernatural realms.  Retirees Will and Cass, along with their two dogs have a comfortable life—until murder hits close to home, and they suddenly find themselves the prime suspects.

Finn does a great job building tension with “It” watching and stalking them, their own daughters falling into the mindset of suspicion “It” has orchestrated.

This is a short story rife with tension that steadily builds as Cass, then Will, come to realize the evil which has infiltrated their lives. I didn’t expect the twist at the end. On a side note, I love how the author always includes pets in her stories, crafting yet another aspect that makes her characters feel like neighbors. 5 stars

The Sheriff Meets His Match
By Jacquie Biggar

After reading Summer Lovin’, part of Biggar’s Wounded Heart series set in the fictional town of Tidal Falls, I immediately wanted to read The Sheriff Meets His Match which tells the story of Jack and Laurel, hinted about in Summer Lovin’. Laurel is a transplant from the sunshine state of Florida who takes the job of secretary to Tidal Falls hunky sheriff. Their attraction is quick and flirty, but complications arrive in the form of Laurel’s charismatic Uncle Max, and her cousin’s lowlife ex-husband.

As guaranteed in any Biggar novel there is plenty of heartwarming moments, including Laurel bounding with Jack’s teenage daughter, and the introduction of a cuddly lost kitten. Every time I read one of these novels, I am amazed by how effortlessly Biggar brings her characters to life with spot-on POV, snappy dialogue, and fleshed out descriptions. This is an author who knows how to set a stage for maximum effect. Each and every book screams “Hallmark movie.” 5 stars!

To Hunt a Sub
By Jacqui Murray

Wow! This book delivers a complex mix of academia, covert ops, terrorist plots, and artificial intelligence. Once started, I couldn’t stop reading. Murray populates her espionage tale with a roster of characters that include an ex-Navy SEAL–now college professor–two brilliant grad students, an eccentric mathematician, and a Middle Eastern terrorist with deep pockets to name just a few of the highly diverse cast.

Kali Delamagente has invented an AI to track the evolution of prehistoric man. But “Otto” is capable of much more. In the wrong hands, Kali’s cutting-edge technology can decimate U.S. submarines. She attracts the attention of a mysterious unseen donor who funds her research, as well the FBI. Enter Dr. Zeke Rowe, ex-SEAL and Navy Intel officer who pursued a career in academia after a failed mission left him with permanent injuries.

Working together, Delamagente and Rowe struggle to remain one step ahead of a terrorist network that has infiltrated most every aspect of Kali’s life. Friends and colleagues are not always who they seem. As the stakes grow higher, Kali’s lab is broken into, her dog vanishes, a new friend is abducted, and her son is kidnapped. The book rockets to an explosive end, but the journey there is alternately a slow burn and a roller coaster of twists and turns.

The research that obviously went into the book—from the origins of prehistoric man, to the workings of submarines, intelligence agencies, and military protocol—is mind-boggling. I’ve already purchased book two of the Delamagente/Rowe espionage thrillers and look forward to three when it is released. 5 Whopping big stars!

And that rounds out my June reading. I hope something I’ve shared intrigues you. I’ve already got my nose buried in July books and look forward to discovering more titles. I love when I find new authors to add to my auto-buy list and discover fresh gems from authors I love. Here’s hoping your reading is every bit as inspired and satisfying!