I’m so excited it’s April. Spring has arrived and all of the nasty white stuff is gone. That’s reason for celebration!

Another reason is all the great books I read last month, reviews of which I’m sharing today. I’m splitting the post in two parts, since I managed to read nine books in March. Moving forward, I plan to break my reviews into a mid-month post and an end of the month post so there isn’t so much back-to-back (although It’s unlikely I’ll read this many books again in a single month!).

To read the blurbs and learn about each title, click the Amazon link after my review. I hope you discover something to add to your TBR. And remember to check back tomorrow for part two!

The Beast Within
by Jacquie Biggar
A wonderful blend of multiple genres, The Beast Within, is the second book the Mended Souls trilogy, but it also reads as a stand-alone. I had no problem picking up the storyline involving Guardian Angels, Lucas Carmichael and Mike, both of whom died in the same car crash. While struggling to overcome their animosity for each other, they’re also charged with watching over Mike’s wife, Julie Crenshaw. A reporter, Julie, is still adjusting to life without Mike, as well as the loss of her unborn baby girl when she begins investigating a string of bizarre serial murders. Enter Conner O’Rourke, a homicide detective who is working the case.

Biggar does well in providing insight to her myriad cast of characters. Paths cross, lives become entwined, and puzzle pieces (you’ll find an interesting side line with them) slot into place while others veer in unexpected directions. The story provides suspense, mystery, and a touch of the supernatural along with a romantic sub-plot as Julie and Conner discover mutual attraction. The writing is polished with excellent scene setting, vivid descriptions, and a storyline that provides multiple twists with plenty of danger. The author is clearly a pro and knows how to deliver a tale that will keep you entertained from beginning to end.

When You’re the Only Cop in Town
A Writer’s Guide to Small Town Law Enforcement
by Jack Berry, Debra Dixon
This is an old book that’s been on my shelf for a while. I read the hardcover (which I believe is difficult to find now) but I’m including the link for the Kindle version. There is nothing like first hand information from a man who spent his entire career in law enforcement, seventeen years of which were as a police chief in a small town. This is quick and easy read, filled with anecdotes, straight-on facts, and plenty of humor. I read it with a highlighter in hand, and colored tabs to mark pages. An excellent resource for writers, I can see myself referring to it often as I unleash plot bunnies on my fictional small towns.
Informative and VERY entertaining!

No Easy Street
By Julia Donner
Step back in time with this well-written and engaging tale set in the American west. The period detail is exceptional! When seamstress Elsbeth Soderberg inherits a cattle ranch in Wyoming, she’s thrust into a role she never expected. She’s a woman in a man’s world dealing with hardened cowhands, multiple prejudices, and a ruthless employee. Fortunately, she has neighbor Ezekiel (EZ) Street and his young daughter to help her adjust.

Elsbeth is a strong character, but she shines exceptionally bright when she’s standing up for herself and taking charge of a situation. She has a steely backbone, but at the same time she’s portrayed as a woman with doubts and fears. That combination of determination, conviction, and vulnerability makes her a likable and believable character. The romantic elements are well done and the supporting characters add vivid color. I especially liked EZ’s daughter Penelope and her friend Flora. Hitch a ride and travel west with this delightful book! 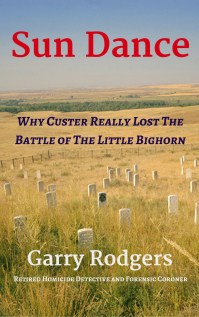 Sun Dance
Why Custer Really Lost the Battle of The Little Bighorn
By Garry Rodgers
Of the non-fiction books I enjoy reading, I have a collection on George Armstrong Custer, Crazy Horse, Native American culture, the Plains Indian War, and the expansion west. When I saw that Garry Rodgers was offering an ARC of a book he’d written about the Battle of Little Bighorn, I jumped at the chance to read it. If you’re unfamiliar with Garry, he’s a retired homicide detective and forensic coroner. He also blogs for the Huff Post.

After reading this book, there is no question of the psychological impact of the Sun Dance ceremony and why that ritual was especially powerful when performed by Sitting Bull. The vision of the great Chief became a battle standard for the massive number of Native Americans ready to defend their way of life. Rodgers walks us through understanding how sheer numbers alone didn’t win LBH for the Native Americans. He backs up his theory with concise explanations and detailed research. Written in an easy to read style, with a staggering amount of resources included, this book is excellent for both dedicated students of history, and even armchair followers like me.

Although Sun Dance…Why Custer Really Lost the Battle of The Little Bighorn has yet to be released, you can follow Garry’s blog, dyingwords.net to keep current of news. You can also request and ARC and learn more about the research behind the book HERE.

I was kind of all over the place with my reading in March, which happens sometimes, but everything I read was awesome. I’ll be sharing five more books tomorrow and hope to see you then!