Despite having two DNFs on my reading list this month, I still managed to discover some good books. The DNFs were authors I didn’t know and had not read before. Both titles sounded promising, but after six chapters each, neither could get off the ground. Needless to say I was disappointed, but I did enjoy some great books I want to share. Because I read six in February, and one of the later reviews is rather long, I’m splitting this post into two parts.  Look for part two on Wednesday.

Once again, because I don’t want to make the post too long, click on the Amazon link if you’d like to read the blurb and learn more details about the book selections.

Where the Crawdads Sing
by Delia Owens
I expected this book to be great, given all the buzz it’s had. The story is engaging and holds the reader’s interest. I was especially taken with the vivid descriptions of the marsh and small-town life in the 1960s. I was halfway through the story thinking how good it was, but kept waiting for that extra something to make it “great.”

And then it happened…

The last third of this book is what elevates it beyond good story-telling to exceptional story-telling. Where the Crawdads Sing deserves all of the accolades it’s received and more. The characters are ones that will linger in my mind for a long time to come, especially the conclusion of their story. As for the marsh—it became a character in itself. This is a book I can easily see myself going back and reading again. A wonderful coming of age tale with added layers of mystery. 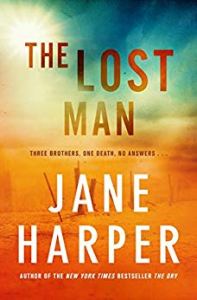 The Lost Man
by Jane Harper
This is the second book I’ve read by Jane Harper, and I have a third on my Kindle. She always spins a good murder mystery plot, along with a compelling Australian setting. This time around, the reader is treated to the remote solitude of the Outback, whose grit, dust and dry heat seem to permeate every scene.

Brothers Nathan and Bub Bright meet up at a legendary gravestone dividing their properties, only to find their third brother, Cameron—in charge of the family homestead—dead. Harper takes her time introducing the reader to an array of characters as well as family background issues that become key later on. I thought the beginning moved a bit slowly, but the mystery eventually took off. At that point, I couldn’t flip pages fast enough.

There was a continued reference to a particular item (no spoilers) that I thought much too heavy-handed (I get it, already!), but other than that this was a good read. I waffled back and forth on the identity of the killer and was proven right at the end, but not for the reasons I suspected. Jane Harper is on my auto buy list, and although I didn’t care for this book as much as The Dry, it delivered a solid tale with an awesome ending.

Can’t Let Go
by Alison Grey
This is a quick easy read, built around old secrets, friendships, betrayals and lies.  The main character, Larkin, marries into one of the most privileged families of Charleston high society. Larkin comes from a poor background and doesn’t fit in–until she’s befriended by Caroline Beaufain, the queen bee of the social scene. Although the book doesn’t really take off until the middle, the beginning is far from draggy. The author has a way of introducing characters and setting scenes that kept me flipping pages, even as I  was waiting for the hammer to fall.

This is a psychological thriller, so don’t expect explosive action. It’s more about figuring out what each character has to gain and what they’re willing to do to achieve their goals. When the impact does hit, the fallout is quick and jaw-dropping. I won’t say I’ve never seen this plot done before, but the way Grey handles it is riveting and fresh. I will definitely be looking for more books by this author and have already pre-ordered her next release!

So what do you think? Do any of these appeal to you? Have you read any?  What’s next on your reading list?  Drop me a line below and let’s talk books!