Today is the book birthday for End of Day, book 2 of my Hode’s Hill trilogy.  If you enjoyed book 1, Cusp of Night, you’ll find this one in the same vein. Once again, I’m visiting the small Pennsylvania town of Hode’s Hill, but with a plot whose tentacles reach back to the town’s founding. As in Cusp of Night, I’ve spun two mysteries—one in the the past (taking place in the year 1799) and one in the present. You get two separate mysteries that tie together at the end. 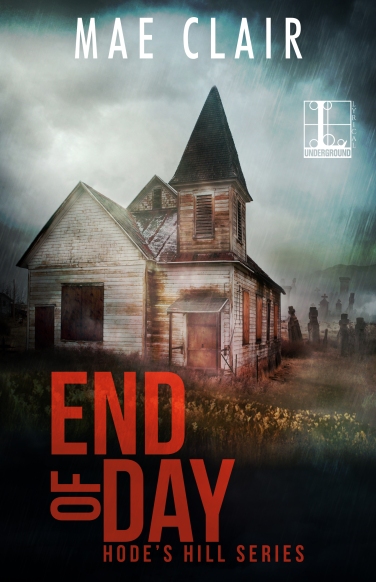 The past is never truly buried…

Generations of Jillian Cley’s family have been tasked with a strange duty—tending the burial plot of Gabriel Vane, whose body was the first to be interred in the Hode’s Hill cemetery. Jillian faithfully continues the long-standing tradition—until one October night, Vane’s body is stolen from its resting place. Is it a Halloween prank? Or something more sinister?

As the descendants of those buried in the church yard begin to experience bizarre “accidents,” Jillian tries to uncover the cause. Deeply empathic, she does not make friends easily, or lightly. But to fend off the terror taking over her town, she must join forces with artist Dante DeLuca, whose sensitivity to the spirit world has been both a blessing and a curse. The two soon realize Jillian’s murky family history is entwined with a tragic legacy tracing back to the founding of Hode’s Hill. To set matters right, an ancient wrong must be avenged…or Jillian, Dante, and everyone in town will forever be at the mercy of a vengeful spirit.

In Cusp of Night, I introduced the reader to the spiritualist movement of the 1800s, sham mediums, and a creature called the Fiend.

This time around, the story touches on Church Grims, Folk Memories, and a collection of monsters. Yes, monsters. I do love my creatures 🙂 The two lead characters—Jillian Cley and Dante DeLuca—had minor roles in Cusp. They take center stage, along with several new characters who bullied their way into the story. I never saw Madison, Sherre Lorquet, or the Porter Brothers coming until they appeared in their respective scenes. All added new layers which helped develop the plot. My muse knew what he was doing.

Thank you to everyone who pre-ordered. If you haven’t already grabbed a copy and would like to, you can purchase from the bookseller of your choice through this link.

Although this is the second book of a series, it can also be read as a stand alone. I would love to tell you more about grims and folk memories, but for now, I’ll let them unravel in the book. 🙂