Hello, everyone. Please welcome Julia Donner with her newest release, To Jilt a Corinthian. I “met” Julia through Judi Lynn, and it has been a pleasure getting to know her and interact with her. I’m in awe of Julia’s knowledge of the Regency era, and excited about her new release. Naturally, I invited her to my blog to share the blurb and an excerpt 🙂

Hi Mae, and thanks so much for inviting me to your blog and giving a shout out about my newest Regency To Jilt a Corinthian. This character pairing led to one of those fun instances when the story wrote itself. I mostly hung on for the ride as these two took me on their own personal tour into the eternal war between the sexes. 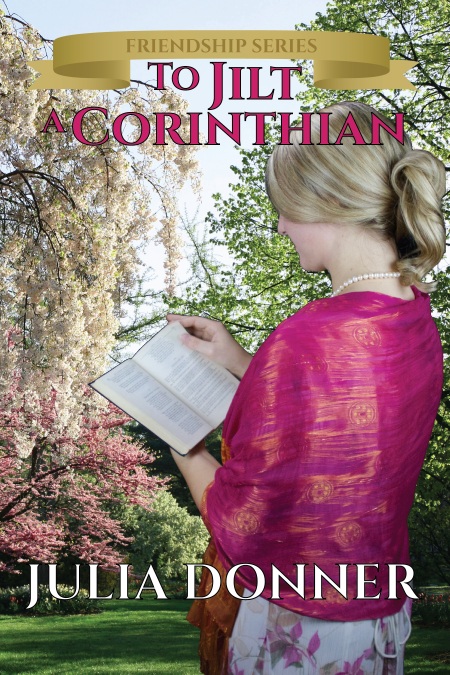 Blurb:
Beatrice Allardyce is too busy for something as inconsequential as marriage. And love? A waste of time when there are so many books to read and a father who needs her care. Getting caught in a compromising situation with the haughty Sir Jocelyn Warfield is not part of her agenda.

Intrigued by her intelligence and keen sense of social responsibility, Sir Jocelyn finds himself caught in fascination’s snare with a female who has to be constantly reminded that he’s not a man easily discounted. Or discouraged. Quite the opposite. All he has to do is make her believe that he’s her best bet.

Excerpt:
Beatrice knelt in front of the gap in the fence amid further protests that she would ruin her muslin frock or cause a rip in the tight-fitting spencer, which happened to be Beatrice’s favorite. Due to its snug fit, she was able to squeeze her body through the slats. She attempted to wriggle through until stopped by the curve of her hips. The indent of her waist allowed for room to breathe. Stretching as far as possible, held snug by the wooden slats, she managed to grab the piglet’s front leg and drag him closer. Scrumpy squealed louder. Once the piglet was no longer forcing the tangled rope around his leg to be drawn tight and taut, Beatrice got the knotted twine unfastened and slipped it over the tiny, cloven foot. The pig immediately calmed to making soft grunts. Beatrice exhaled a relieved sigh and carefully maneuvered a retreat from between the slats, but got stuck with the dilemma of how to maintain a hold on the piglet whilst wriggling back out. To her profound dismay, she heard Mrs. Prichard call out to someone. Beatrice couldn’t imagine anything more humiliating than getting caught on her hands and knees with her back end and nothing else exposed to the world.

She struggled gamely until Mrs. Pritchard said, “Oh, sir! Sir, would you kindly assist my dear Miss Allardyce? If you would take my piglet from her, I do believe she can bring herself through the fence.”

A hand encased in a tan driving glove appeared from over the fence and reached by Beatrice’s cheek to take the pig from her grasp. The next thought that entered her head was that the gentleman had to be tall to reach over the fence so easily. As she twisted sideways with breath indrawn, she heard Mrs. Pritchard expressing a joyous reunion with her pet.

Face burning, Beatrice extricated herself from between the fence and accepted the gloved palm waiting to assist her to her feet. She tried to keep her eyes cast downward but it was difficult not to notice what stood before her as she rose up. Dread filled her being. This was no villager.

She first noted the sparkle of black top boots that identified the particular care of a gentleman’s gentleman. Then came the snug fit of immaculate breeches seen through the parting of an unfastened, ankle-length greatcoat. The drape of its superior cloth proclaimed it cost enough to feed a dozen families for a year. She looked higher. His preference of Brummel-austere style was made known with the subtle statement of only one fob draped across a black waistcoat secured by a golden pocket chain. When she stood fully upright, he removed a monocle, allowing it to hang from its black ribbon, and dipped his head in a nod of greeting.

Beatrice, achingly aware of the disheveled state of her person, dipped a curtsey. “My thanks for your assistance, sir.”

“It was entirely my pleasure, Miss Allardyce.”

If only a crevice in the earth would open up and swallow her whole, but before that wish could present itself, Mrs. Pritchard spoke up. “You are indeed an answer to prayer! Please forgive my curiosity, but I do not believe you are from Bruntwich-on-Lye.”

“You are correct, ma’am. I am waiting for a small repair to my curricle before pressing on to London.”

“I have never been, you know,” Mrs. Pritchard coyly informed, cuddling her pet to her bosom. Scrumpy nestled against her, his little pink snout twitching with contentment. After being the cause of one of the most humiliating moments of her life, Beatrice was ready to toss the spoiled swine into the nearest cauldron.

A fresh wave of embarrassment swept through Beatrice when she noticed that her dirt-smeared hand had soiled the gentleman’s tan glove. The front of her white muslin frock had mud smudges over the knees, its hem already grubby from taking a shorter route to the village through a sheep pasture. She felt entirely undone in the presence of this gentleman’s perfection. She dared to glance up and encountered a cool gaze from hazel eyes under straight, black eyebrows. His was a lean and haughty face, making her glad he’d removed the monocle. Being viewed through that single lens would be worse than a minute inspection with a quizzing glass.

This gentleman’s sweeping and impersonal inspection made her nervous and his detached urbanity proved disconcerting. She offered a shallow curtsey in farewell and whirled to escape.

Forcing down a nervous swallow, she collected poise, turned, and lifted an eyebrow. He extended her package. She hadn’t noticed it in his hand, distracted by embarrassment and feeling unsettled by the presence of so much masculine confidence and elegance. It was scarcely her fault that she’d never encountered a man so sophisticated. Her father’s humble, priestly manner bore no resemblance to this sort of male.

She accepted the parcel, twitched a smile, and sought relief in the knowledge that it was unlikely she’d ever see him again, but he proved her wrong by attending Sunday service the following morning.

Bio:
Julia Donner (aka M.L.Rigdon) grew up in historic Galena, IL, USA, and spent most of her time in the museum of her aunt, who encouraged her interest in history and understood the need to cherish a dream. She started writing in secret in her teens and never stopped, merging it with her mother’s encouragement to study theater and music, which led to performing in the Midwest, California and as far away as Austria.

Her favorite genres are regency and fantasy, but since she loves to read everything, she also writes contemporary and YA fantasy. (Yes, she knows you’re supposed to stick to one genre but can’t stop herself.) Rigdon has twelve titles on Kindle as Donner, and nine as M.L. Rigdon, including the final installment in the awarding winning SEASONS OF TIME trilogy. All of her works are stand alone. She’s a firm believer in HEA.

Purchase to Jilt a Corinthian from Amazon

49 thoughts on “New Release: To Jilt a Corinthian by Julia Donner #Regency”