Happy Tuesday, friends! Most of you know I contribute to Story Empire, a group writing blog, along with five other authors. We’re always happy to support each other when one of us trots out a new release. Harmony Kent has been on my blog several times in the past. I hope you’ll welcome her back with her hot new release, Backstage, which is available for pre-order (see links below). Here’s Harmony to tell you about it now . . .

Here’s a bit about the book for you:

Just when Emma thinks she’s found love. Just when her big chance comes.  Just as she finds a little confidence at long last. Right then, it all goes horribly wrong.

John believed he had found ‘the one’. But the demons of his past wouldn’t allow him to break the leash, and when he gets the wrong end of the stick, it just confirms all his old prejudices and hurts.

THEN THERE’S THE BIG MAN WHO CAN MAKE OR BREAK A CAREER, AND THE DEMANDS HE MAKES

Derek Prentis is his name. Coercion is his game. He’s the man with the money. The big man who wants to keep Emma under his control and who will do anything to keep it that way.

THE PERFECT STORM OF ROMANCE, PASSION, AND GREED.

AWAY FROM THE LIMELIGHT, IT’S ALL HAPPENING BACKSTAGE. 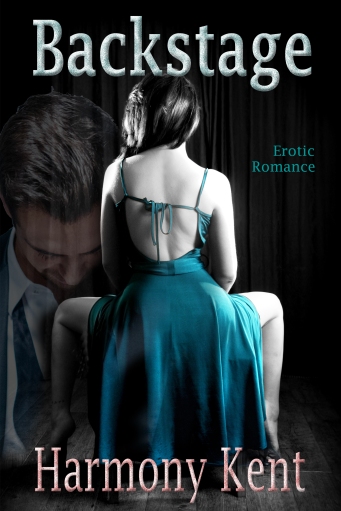 Emma reached the wide glass-fronted doors of the hotel and pushed through at speed, but too late. The car that held John sped away in a cloud of powdered snow and exhaust, spitting out his anger in a visceral way that she couldn’t fail to feel. Distraught and utterly bereft, she sank to her knees in the wet snow and held her hands over her face, barely able to breathe, let alone cry or make a sound.

The hurt and grief made a vacuum that felt as though it must surely kill her. What had just happened? How had it just happened? She sucked in a great heaving breath on a sob. Her chest locked. Prevented her from exhaling. She just knelt there out in the cold, alone, and—quite uselessly—trying to suck in more air. Her head spun, and she fell forward onto all fours.

Firm, warm hands grabbed her shoulders and hauled her back to her knees. Emma’s lungs had turned her into a fish out of water. Then strong arms wrapped her from behind and pulled inward and upward, performing a Heimlich manoeuvre on her. She gasped, and then broke into a coughing spasm. Then she sucked in air greedily, sobbing and gasping alternately.

Those same strong arms pulled her into a comforting embrace and rocked her. Ian’s voice filtered through her panic while he made soothing noises by her ear, telling her over and over again that it would all be okay. When had he turned into such a liar? How could anything ever be okay again? John had gone.

If you enjoyed reading about Backstage, you can pre-order it now at Amazon … US LINK and UK LINK. And it goes on live sale on March 30th. Thanks so much for sticking with me this far.

Connect with Harmony at the following haunts: