Hey, everyone! I’ve got another goodie to share with you today. Staci Troilo has a new release in her high-octane Nightforce Security Series. I devoured Password, the first book, and promptly did the same with Gamble (cheating here: I got to read this one before release).

Once again, Staci has hooked me with her characters, plot cyclone (it moves that fast) and clever mystery. Today, she’s introducing Gamble’s hero, Noah Crawford. Trust me—this is one guy you’ll want to meet. 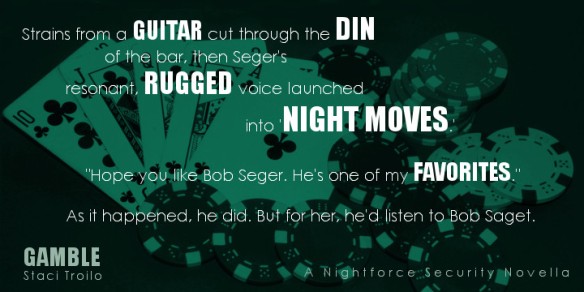 Hi, everybody. Thanks for indulging me today. I promise I won’t take up too much of your time.

I consider myself a multi-genre author. My novels are broadly categorized as romance, mystery, and mainstream. The subgenres vary considerably, and my short stories add even more options to the mix.

I started writing romance because I have a thing for the alpha male. Yes, he can be (and often is) in many genres—crime fiction, western, sci-fi, paranormal, etc.—but I initially associated that type of character with the romance genre. I liked to read about this guy. Only stood to reason that I’d enjoy writing about him.

That brings me to my new novella Gamble (part of the Nightforce Security Series), and its hero, Noah Crawford. Noah is ex-military (former SEAL, to be specific) and he works with a bunch of guys whose histories are similar to his. We don’t learn too many specifics; those missions are classified, after all. But we know there were some dark days in their pasts. And whether these men served together or not, that kind of shared experience forms a bond. These guys are tight.

I’m not related to any SEALs, but many of my family members (and my husband’s) have served. Some are still active. I wanted to write a series that paid homage to these heroes, putting them in settings we could all recognize rather than in combat theaters in countries we’ll never see. So, my heroes have retired from the military life. You know alpha males, though. They’re never far from action. The Nightforce guys are no different.

We meet Noah at their hangout—One Ugly Mug. The bar is owned by another veteran, so far only known to us as Cap. It’s a special night because a friend of theirs is in town. The drinks are flowing as liberally as the stories. Noah is comfortably buzzed and not thinking as clearly as usual.

That’s when she walks in.

Noah is interested in his one-night stand becoming so much more. But there are hurdles to jump, games to play, and gunmen to thwart. That’s right, I said gunmen. But we’re not talking about the bad guys today. We’re talking heroes.

Noah fits into this group so well not just because of his history, but because he can hold his own when the barbs start flying. These guys talk fast, act faster, and always have a sarcastic comeback. Heck, they often are the ones who start with the insults.

If you like fast-paced stories with quick-witted, sharp-speaking, fearless, and (sorry, guys) drool-worthy heroes, I think this novella is for you. Noah might just become your next book crush. I know he became mine.

Sometimes stakes are too high to gamble. Other times they’re too high not to.

Noah Crawford is a consummate bachelor—until a one-night stand piques his interest in something more. The only problem is, she wouldn’t give him her name, and he has no way to find her.

A week later, resigned to forgetting her, he accompanies his friends to a casino. Floor traffic promises to be light while everyone clusters at the sportsbook for the college basketball championship game. But Noah isn’t in the mood for frivolity and sets off on his own. No one is more surprised than he is when he bumps into his mystery woman.

He’s playing a far different game than cards when armed criminals take over the poker room. Noah is separated from his friends, and somehow the room has been cut off from security. Help isn’t coming. It’s up to him to keep everyone safe while he tries to thwart the gunmen.

Noah quickly realizes he’s trying to prevent more than a simple heist. And he doesn’t know who he can trust. The stakes have never been higher, and he’s all in. But one of the thieves might have an ace up his sleeve, and that could cost Noah everything.

About Staci:
Staci Troilo writes because she has hundreds of stories in her head. She publishes because people told her she should share them. She’s a multi-genre author whose love for writing is only surpassed by her love for family and friends, and that relationship-centric focus is featured in her work.