Charles Yallowitz has a new book release in his Legends of Windemere series. I’m late in sharing the fanfare due to—ahem—a certain deadline, but wanted to help spread the news. Check out Path of the Traitors. Love that cover!

On the eve of destiny, the fate of the champions are in the hands of those they once called Enemy. 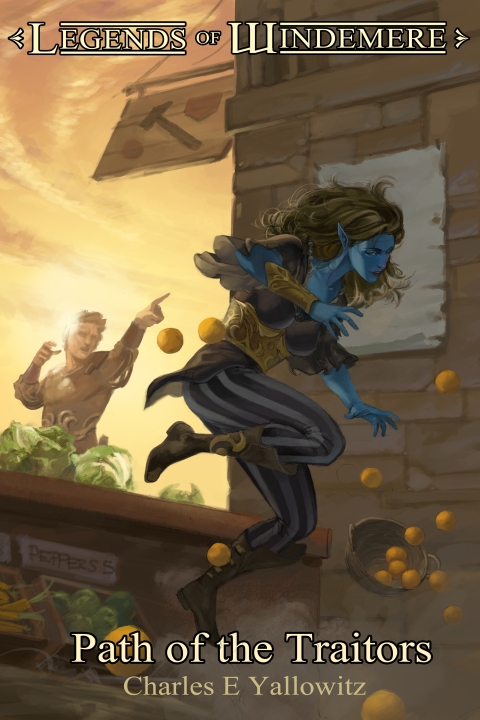 Hated and distrusted, Queen Trinity must leave the shadows and reach for redemption.

With their final battle on the horizon, the champions are faced with a long-lost piece of the prophecy. Unable to search for the crests that are rumored to be the key to survival, they must turn to a band of their former enemies for help. Sinister desires and hopes for redemption collide as Queen Trinity of the Chaos Elves leads the hunt and struggles to keep her companions on the path of heroism. Monsters, traps, mysteries, and their own pasts will rise up to stand in the way of these people who have spent their entire lives committing sins. Throughout it all, another old enemy is lurking in the shadows and determined to claim her own delicious prize.

By the end of their journey, those who survive will learn that being a hero is more than simply stepping into the light.

Dive into the adventure on Amazon for $2.99!
Find it on Goodreads!

A gurgling causes the two women to pause and look into the pit where the shadows are swirling among the jagged stones. Two black tentacles lance out of the ground and wrap around Yola’s waist, the ooze-dripping projections turning silver at the taste of her magic. Attracted to the stronger energy, the aura syphon yanks the immortal into its slime-covered maw and becomes a metallic beast. With its armored skin, the camouflaged predator is now visible and resembles a sea anemone with the body of a beetle. The jagged rocks are fused to the animal’s exoskeleton and there are six jointed legs that help it scurry out of the pit. Standing over Trinity, the creature opens a faint crease on its body to reveal a bulbous eye with a star-shaped pupil. It pauses to shove a few tentacles into its mouth and hit Yola with pulses of electricity to stop her from struggling. It changes from silver to gold when she attempts to break free, her efforts being quickly drained by the monster.

“Let the crazy woman go before you get killed,” Trinity whispers to the aura syphon. She creates a fireball in the hopes of getting its mouth open, but her spell is ignored. “No reason to have a snack when you have an eternal meal in your belly. Maybe we can have a trade. Can’t believe I’m trying to bargain with this thing. Well, I gave you a chance, so I’m going to blow you up before things get worse. Hope you heard that Yola and are bracing yourself.”

The beast gurgles before releasing a blast of sticky strands that lock Trinity in place. Instead of going after the trapped chaos elf, the creature turns its attention to the helpless army. Having had its fill of magic, the aura syphon is ready to gorge on fresh meat and opens a second mouth that is filled with knife-like teeth. Heading for Sir Harbiss, it is stopped when a chunk of earth erupts beneath it and flips it back into the pit. Unsure of where the attack came from, the aura syphon leaps out and reveals several eye stalks that search for an unseen enemy. A cutting wind lops off half of the projections, but Yola’s potent energy revives them and protects the crystalline armor plates. When the spell comes back around, it bounces off the new defense and bursts against a hill. Blasts of fire strike the beast from behind, so it sprouts a fan-shaped tail of water that douses the flames.

Looking around, the aura syphon stops when it sees that Trinity is nowhere to be seen and there is a hole where she once stood. Spikes grow from the predator’s belly and it slams against the ground in the hopes of impaling the chaos elf. The hiss of escaping gas is heard an instant before an explosion sends the shrieking animal into the sky. Careening towards a solitary cloud that is very low to the ground, the beast catches the scent of an aura that revives the one currently in its gut. Passing through the cloud, it finds its legs caught in a net that runs down to where Trinity is hiding behind a hill. With enhanced strength, the channeler slams the aura syphon into the ground and delivers a leaping stomp to its soft upper body. Instead of ejecting Yola, the creature opens its skin to swallow the chaos elf’s leg up the knee.

“Fine. Backup plan it is,” Trinity mutters, synching her aura to that of the imprisoned immortal.

Releasing as much magic as she can without killing herself, the channeler creates a power surge within the aura syphon. Unable to absorb or redirect so much energy at once, the predator tries to reject the grinning chaos elf. Plunging her fingers into its flesh, Trinity refuses to be thrown off and continues her assault. Blisters appear on the hard exoskeleton and the metallic color flakes off to reveal the natural black of the tentacles. Without warning, the gold returns and the animal explodes with enough force to collapse the ground. Before she can escape, the channeler falls into the pit and is buried beneath the icy dirt.

Need to catch Legends of Windemere from the beginning? Then click on the picture below! First book, ‘Beginning of a Hero’ is free!

Ready for the newest adventure in Windemere? Find out if Queen Trinity earns redemption or will return to the Baron’s side!

Charles Yallowitz was born and raised on Long Island, NY, but he has spent most of his life wandering his own imagination in a blissful haze. Occasionally, he would return from this world for the necessities such as food, showers, and Saturday morning cartoons. One day he returned from his imagination and decided he would share his stories with the world. After his wife decided that she was tired of hearing the same stories repeatedly, she convinced him that it would make more sense to follow his dream of being a fantasy author. So, locked within the house under orders to shut up and get to work, Charles brings you Legends of Windemere. He looks forward to sharing all of his stories with you, and his wife is happy he finally has someone else to play with.

Connect with Charles at the following haunts: