Before I kick off my post, just a quick note that I am also blogging at Story Empire today on the topic of “tribes.” Not sure what I mean?  You can check it out here if the mood strikes. 🙂

Having said that, I’ve been looking forward to this day for a while. Yeah, I know it’s Monday but in the U.S. August 21, 2017 is a big deal. Why? Because states and cities lying in a narrow band from the northwest to the southeast are going to experience a total solar eclipse.

As an example, if you live in Hopkinsville, Kentucky you’ve got it made. I picked that location because it’s listed as one of the 10 best viewing areas according to GreatAmericanEclipse.com.

It’s also the location of the Hopkinsville Goblin extraterrestrial incident of 1955. Hmm. That sighting occurred on August 21, 1955. Am I the only one who finds the coincidence in date a little freaky? 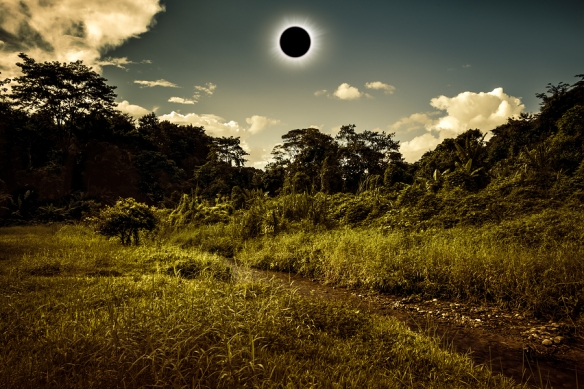 If you are in Hopkinsville or anywhere in the cross-country viewing band, consider yourself lucky. My area will only see a partial eclipse with the nearest to totality happening around 2:40 PM. People have been gobbling up viewing glasses wherever they can find them. As far as I know, there are none to be had.

The last time a total solar eclipse was visible from the lower 48 states in the U.S. was in February of 1979. Once again, my area only saw a partial eclipse but I vividly remember making a pin hole viewer. I also had a telescope at the time which was equipped with a sun filter and a white tray for projection. I still remember fiddling with that thing in the front yard. “Sky events” have always been something I’ve found highly intriguing. The Northern Lights are on my bucket list.

My father had a profound interest in astronomy and passed that love onto me. From sitting outside together and watching the stars, to showing me how to use my first telescope, he made sure I appreciated science and the sky. When he was in his twenties, he designed and built a telescope for one of his nephews. This would have been in the 1940s. That telescope remained operational into the 21st Century.

From the early origins of Man, we have looked to the heavens for signs and symbols. In days of old, people lived in fear of an eclipse, many believing the sun was devoured by demons or dragons. Others that the sun and moon waged war. Superstitions ranged from fear of going outside, to an eclipse being harmful to pregnant women, to children who were born during an eclipse turning into mice. In 6th Century B.C., a war between the Medes and Lydians ended abruptly because of an eclipse. The armies on both sides believed the darkening of the sun was a sign the gods were displeased by their fighting. On the more favorable side, Italians believed flowers planted during an eclipse would bloom with brighter colors than natural.

Mondays rarely make it onto my list of favorite days, but this one will go down as being special. Even if haze or clouds make the eclipse less than stellar, I love that people have taken such a keen interest in the sky, and are looking forward to a rare celestial event.

Are you in the path of the eclipse? If so, what do you have planned for today? Is the excitement rampant where you are? Most importantly, have you ever experienced a solar eclipse? Let’s celebrate the event in the comments below!