I’m delighted to welcome A.m. Manay, sister author with RRBC to my blog today. She’s here to share some background on her newest November Snow novel. I’ve already read the first two books in this series and have pre-ordered book 3, She Marches Through Fire, which releases in just a few days. The amount of world-building Anne Margaret has put into this series is phenomenal. Highly recommended by moi. 🙂

In the meantime, please say hello as Anne Margaret shares some background about a unique setting in her books…

In both She Lights Up the Dark and the forthcoming She Marches Through Fire, November hides in the basement of an historic church in Oakland, California.  Churches have a long history as places of sanctuary for those hiding from persecution or arrest, so I found it thematically appropriate to make a church November’s place of refuge.  The church is based on the one I actually attend, which continues to be a beacon for social justice even as its membership has dwindled since its heyday following the 1906 San Francisco earthquake.  I wonder if the internet sleuths among you could identify it based on the details in She Lights Up the Dark . . .

The sanctuary building of my church was constructed in 1913, and the heating system is thus based on century-old technology.  The basement chamber where November and company hide is part of that system.  A furnace heats steam, which is sent into coils that form blocks of copper tubing several feet deep.  An enormous fan the size of a bedroom blows air past those heated coils.  The hot air fills a half-height chamber, then it rises through vents into the sanctuary above.  This photo is of that short chamber, where November and company hide.

As you can see from the photo, the accommodations for November and her companions are not exactly lavish.  It’s dark and damp down there.  The ceiling is criss-crossed with old pipes and sharp bits ready to scratch the unwary and to test the efficacy of tetanus shots.  The space is littered with old, rusting equipment.

And yet, unsightly as this basement room is, it keeps us warm every Sunday in real the real world, and it protects my characters in the pretend one.

It’s a testament to my characters’ desperation that no one complains much about their hiding place’s physical condition.  Otherwise, it would be hard to imagine Luka, in particular, choosing to rest somewhere so beneath his station in life.

In She Marches Through Fire, November and Luka wind up spending the day beneath the church having just survived an enormous vampire brawl, a car chase, and a multi-vehicle collision at high speeds, after weeks of the enemy constantly nipping at their heels.  That’s probably about what it would take to get me to sleep down there.  How about you?

To find out just how much November needed sanctuary, pre-order your copy of She Marches Through Fire, arriving March 28th. 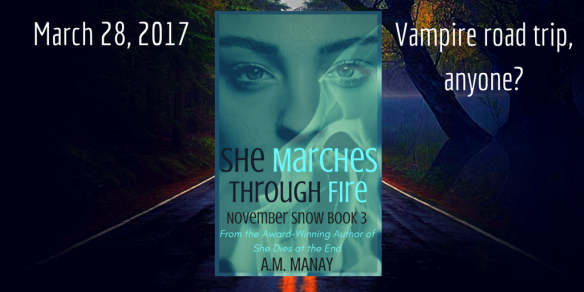 Mini-blurb:
Psychic vampire November Snow must battle grief, injury, and her own family as she fights evil on all sides. She seeks a cure for the poison sapping her strength and a fairy weapon as powerful as it is dangerous to wield. When it is time to save the innocent and gain justice for her maker, will she find the strength to march through the fire?

EXCERPT:
Luka woke, and his body jerked as he registered the presence of the silver bindings holding him helpless on the floor.  He looked up at his companions: Pine, Hector, Raina, and Gul.

“Tide has turned a bit, you worthless bastard,” Hector said, unable to resist the urge to needle the man he despised.

“Indeed, it has,” Luka admitted.  “The wheel of fortune does turn.  One day at the top, and the next . . .  Well, here we are.  Are you going to torture me, Hector?  Make me beg for death?” he mocked, widening his eyes in fake fear.

“He wouldn’t stoop to your level,” Pine replied tensely.

Luka looked from Pine to Hector and back again before a grin spread over his face without reaching his eyes.  “My, my.  How deliciously perverse.  Whatever will your Grandma Hazel say?  Did you know she used to keep a werewolf head mounted on the wall of her bedroom?  You have to do some kind of special magic on it so it doesn’t turn back into a human one when the creature dies.  I’m not really familiar with the details.  At any rate, it was quite the conversation piece.  Do you suppose she still has it stashed somewhere?  In some ratty storage facility in suburban Nevada or something?  Can you imagine?  That would make a very special episode of Storage Wars, don’t you think?”

“Shut up, murderer,” Hector said, his hands balling involuntarily into fists.  His knuckles glowed white against his brown skin.

“And speaking of murderers, dear Pine, has Hector told you how old his father was when I so cruelly had him slain?”  A cloud crossed Pine’s face.  “He hasn’t?  Well, that should make for an interesting tale, indeed, but I don’t think you’ll much enjoy it.  Might give you bad dreams.  You know, if fairies slept.”

“I know how old Carlos was when you murdered his family and stole his childhood,” Pine managed to reply, in a voice that shook more than he’d intended.  “You’re vile.”

“Tell me, Hector, do you mutts still leave your defective children to the elements?  Poor little cripples who’ll never turn—  freezing to death in the snow, or burning up with thirst?  Mauled by vermin?  Pecked at by razor-beaked birds before they even expire?”  Luka had dropped his pretense of jocularity, his fangs now peeking out of his snarl.

“Enough,” Raina declared.  “I need to see to November, and I may need Luka’s help.  Savita may need him as well, if Greg will allow it.  Nobody is torturing or killing anybody today.”

“What’s wrong with November?” Luka asked, the hostility suddenly gone from his voice, replaced by concern bordering on fear.

“I told you, William shot her,” Raina said impatiently.

“So, you pull the bullet out, and she heals.  What’s the problem?” Luka asked, increasingly agitated.  “Even a baby can take a bullet or three.”

Gul and Raina exchanged a look.  “William poisoned the bullet, which shattered in her leg,” Gul finally explained.  “Some exceptionally strong werewolf toxin.  I believe you’re familiar with it, since he got it from one of yours,” he added pointedly.  “It would be quite helpful if you could give us the antidote.”

Luka looked stricken.  “I had plenty of it.  In the house.  Before it burned to the ground.”

“That is highly unfortunate,” came Gul’s understated reply.  “For both of you.”

71 thoughts on “Welcome A.M. Manay with She Marches Through Fire #Vampires #NewRelease #RRBC”