Please join me for a character Interview with Brandi, from S.K. Nicholls’ crime romp, Naked Alliances. Susan is a new member of RRBC, and I’m happy to showcase her latest work on my blog. Susan sent Brandi over for a chat…

Profession: Exotic dancer at the Parliament House, a gay club.

I’m thrilled to have here today Brandi from S.K. Nicholls’ new crime romp, Naked Alliances, the first volume in the Naked Eye Series. Brandi is a twenty-nine year old exotic dancer living in Orlando, Florida. She serves as a private investigator’s sidekick in the novel.

It is a pleasure to have her with us today!

Thank you so for this interview, Brandi. Now that the book has been written, do you feel you were fairly portrayed or would you like to set anything straight with your readers?

Thank you for having me. Sorry I was late, but I play Pokemon and there was a Snorlax in my nearby sightings and I found him right around the corner. My author did a wonderful job portraying me in Naked Alliances. The private investigator in our story claims I’m irresponsible, but I saved his butt more than once.

Do you feel the author did a good job colorizing your personality? If not, how would you like to have been portrayed differently?

Colorizing is an interesting choice of words. I’m biracial and transgendered. My author took great pains to make certain that I wasn’t stereotyped, but Richard Noggin, a.k.a. Dick Head, P.I., certainly seemed to have some images of me that are stereotypical. I hope we’ve cleared the air on a few of those in the first book, so the author doesn’t have to work so hard in the next. I also appreciate that my author was able to demonstrate that I am quite capable of being a nurturing soul, even if things didn’t start out that way.

My author had an artist friend of a mutual friend of ours, Craig Boyack, illustrate me and his spokesperson, Lisa Burton, when I paid them a visit. I think he did a fine job, as well. Lisa gave me a new purse. I’m hoping my author will let me use it in a future book.

What do you believe is your strongest trait?

I take crap from nobody. Especially not a bumbling P.I. who can’t seem to keep himself out of trouble. He’s smart man with crummy luck, but I’m no dummy. I’m a former Explosives Ordinance Disposal Specialist in the U.S. Army, and did a brief stint as a cop. Dancing and entertaining men are not the only things I do well. I am highly skilled. And I’m certainly not gonna take any crap from some mastermind of an organized crime ring.

Admittedly, I have two bad traits. First, I have a horrible fear of guns. It came about after my Army days when I was working as a cop and had a serious incident trying to talk down a woman with a gun. Things didn’t turn out well. And finally, not so much a trait as a habit, but I smoke cigarettes. At least I did when the author wrote the book. But I’ve quit the cigarettes since then and now I vape, make my own e-juice, and wrap my own coils.

If you could choose someone in the television or movie industry to play your part if your book was made into a movie, who would that be (and you can’t say yourself!)?

Chablis from “Midnight in the Garden of Good and Evil”. She’s my heroine. Loved the movie and loved the book by John Berendt. She was not only the heroine in the book, but played herself in the movie. RuPaul has some characters that might do the job well, but I can’t think of one that’s better than me.

Do you have a love interest in the book?

I like to think I’m confident about my sexuality and I have loved. Truth is, I’m recently transitioned, so I’m still sort of struggling with my sexuality and since the book is set in a nudist resort that has a significant population of swingers, I had opportunity to consider my options. I still can’t decide if I’m more attracted to males or females. I’m attracted to both for different reasons. Richard is kinda cute, but with his attitude, I’m not sure we could ever really be more than friends.

At what point of the book did you start getting nervous about the way it was going to turn out?

When Richard showed up at the nudist resort all angry at me for leaving our little friend, Cara, the sex-trafficking victim, alone I thought he was gonna send me on my way. But after finding out what a bad day he’d had, I was able to smooth things over. Then, there was a time when he took off on his own to settle a score and I was really worried.

If you could trade places with one of the other characters in the book, which character would you really NOT want to be and why?

Tim Morrison, the former mayor of Orange County and current Administrator of Growth and Development. He plans to run for Governor, but leads a double life. He tries to keep too many secrets. I put it all out there. He’s more sexually confused than I am, and sex-trafficking is rampant in his community. I wouldn’t want his job. Not only did he lose his wife to murder, but he could very likely lose his kids. He’s an unhappy man, and his personal assistant is an arrogant a**hole. I’d fire him in a minute.

How do you feel about the ending of the book without giving too much away?

I’m glad our author insists on having a satisfying resolution for each book in the series. I want to know what’s going on with everybody in the books, but hate cliff-hangers.

What words of wisdom would you give your author if s/he decided to write another book with you in it?

I really need a new purse. That military green, oversized messenger bag from my Army days holds a lot, but it’s cumbersome, Richard hates it, and it’s just not fashionable.

Thank you for this interview, Brandi. Will we be seeing more of you in the future?

I sure hope so. My author is eager to see how well we are received in the reading community with this first book. If everything goes well, and I’m talking reviews here, she’s promised me a starring role in the next book. (As if I wasn’t the star of this one.) She loves to hear from people about what they liked and didn’t like about her work. You can write to her at sknicholls@sknicholls.com.

Thank you for having me here, Mae. This was my most fun interview to date! 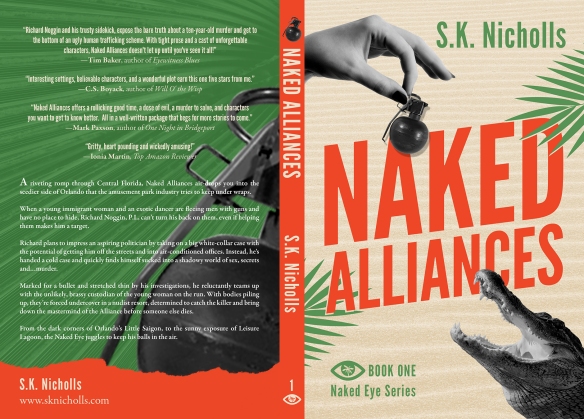 S.K. Nicholls is author of Naked Alliances, Book One in the Naked Eye Series. Her family owns and operates a nudist resort located in Central Florida, Cypress Cove. She has a deep understanding of the lifestyle choice and how it harbors clandestine elements of intrigue and fascination. Social issues are at the forefront of her writing that is touched with a humorous edge. She lives in Orlando, Florida with her husband, Greg. When she’s not writing, she can be found tracking down Snorlaxes, wandering city parks with the homeless, or sipping margaritas on the bow of a boat. She is a member of Sisters in Crime, the Florida Writer’s Association, and Writers of Central Florida…or Thereabouts.

50 thoughts on “Character Interview with Brandi from #NakedAlliances #RRBC”