I’m delighted to turn my blog over to Rave Reviews Book Club, sister author, A.M. Manay today. I invited her to guest blog after reading her spectacular novels SHE DIES AT THE END and SHE LIGHTS UP THE DARK, the first two books in the November Snow series (look for my five star reviews on Amazon).

Set in a riveting reality where vampires, faeries, werewolves and humans interact, this series easily rivals the Twilight and Shadowhunter sagas (and yes, I read those, too). I was so impressed with the world-building and character development A.M. created, I asked her to write a post about world-building for my blog. I hope you’ll make her feel welcome and take a look-see at her engrossing novels.

“A Brief History of the Universe” by A.M. Manay

One of the most enjoyable yet dangerous things about being a fantasy author is the opportunity to build a world.  It’s fun because you get to come up with strange creatures, an imaginary history, your own rules for how magic works, etc.  It’s dangerous for many of the same reasons.  There are a lot of places where you can easily write yourself into corners, or bore the reader, or contradict yourself.  So how did I create the world of November Snow, a world in which vampires, fairies, and werewolves wander among us?   And how did I communicate my vision to the reader?

Writing the first book, She Dies at the End, primarily based on November’s perspective allowed me to present the world as she saw it, as she was getting to know the new world into which she’d stumbled.  This is, of course, a commonly used and fairy effective tack to take.  November naturally asked a lot of questions during those initial chapters, and in addition, her psychic visions helped to fill in some information for the reader.  I tried to parcel things out a little at a time and avoid exposition dumps as much as possible.  You have to trust the reader to put pieces together over time. 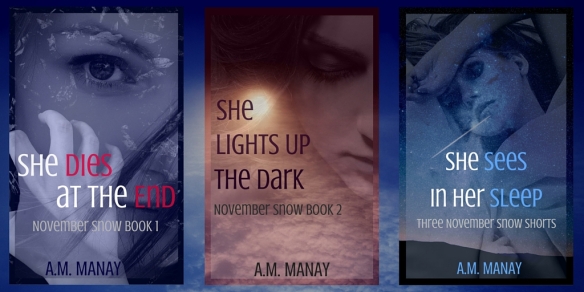 As far as the creatures are concerned, I knew I wanted to do vampires, because I’ve always thought they were sexy and interesting.  I knew I wanted some daytime help for the vampires, and the fairies filled that role.  I wanted the fairies and vampires to have their identities as predators in common, so my fairies feed via touch on the life force of human being.  My fairy and vampire allies needed a common enemy, which is where the werewolves came in.  I wanted to make them a genuine threat, so I came up with the notion that if a werewolf kills a fairy, it extends his own life.  But I also wanted them to be sympathetic, so I could explore issues of oppression.  So I included the werewolves’ self-perception of as the protectors of human beings.  Essentially, I made the characteristics of my supernatural creatures fill the needs of the story I wanted to tell.

As far as the aesthetics of the world are concerned, I tried to take a cinematic view: what would this look like if it were a movie?  What would enhance the story, and what would detract?  For example, I gave the fairies brightly colored hair and eyes to add some cheer and brightness and to distinguish them from the vampires.  And this may sound strange for a vampire novel, but I wanted to limit the blood and avoid piles of dead bodies lying around.  Thus, when my vampires die, they turn to ash.  When my fairies are injured, they bleed light rather than blood.  When the fairies die, they explode in a blinding flash, leaving nothing behind.  In this way, it doesn’t read like a nonstop horror show, and the really bloody violence on the part of Luka, the villain, has the appropriately disturbing impact it deserves.

For the setting, I made my work easier by using a reality we’re all familiar with, the contemporary United States.  I chose to use the San Francisco Bay Area, where I have lived for over 10 years, as much as possible.  It’s a diverse place with a lot of variety, and I didn’t see any need to complicate things by choosing a setting that would come across as awkward if I tried to fake familiarity.  When they do leave the East Bay, they’re mostly on contained sets rather than exploring their surroundings.

The history of the characters and their civilization developed in a pretty organic fashion.  I found that writing short stories about them helped me to flesh things out as far as their pasts and their motivations were concerned.  Even the stories I didn’t finish helped me give my characters some depth.  On a practical note, I did make lists and charts to help myself keep track of everyone, especially during the writing of the first book.  I included them in the second novel to give my fans a refresher.  All the names do have a disturbing tendency to run together!

47 thoughts on “Guest Blogger A. M. Manay with “A Brief History of the Universe” #RRBC”