Tomorrow is release day for A THOUSAND YESTERYEARS, the first novel in my Point Pleasant series. I’m not actually kicking off a blog tour until the beginning of May, but I thought I’d do a couple of posts related to Mothman sightings this week, since he factors so highly into the novel and series.

The first sighting of the infamous cryptid took place on the night of November 15, 1966. Roger Scarberry, his wife Linda, and friends Steve and Mary Mallette took a drive to the “TNT,” a remote wooded area approximately six miles outside of Point Pleasant, West Virginia. Once a World War II munitions site, the region was popular with many young couples who simply wanted a place to hang out away from town. 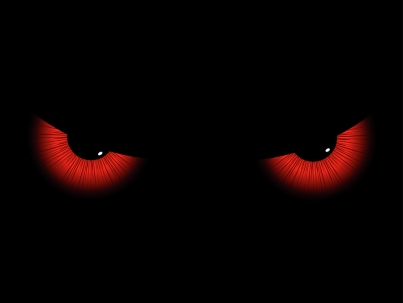 The two couples parked near an abandoned power plant and were chatting when they spied two glowing red spheres behind a gate. It didn’t take long to realize those disembodied spheres were actually eyes. A creature unlike any they had ever seen regarded them steadily in the darkness. Towering nearly seven feet tall, the nightmarish form appeared humanoid with enormous wings folded behind its back

As his passengers screamed, Roger Scarberry hit the gas and sped toward town. The creature immediately took flight and pursued them. Mr. Scarberry insisted he had the car screaming over 100 MPH in his fright to escape the thing, but couldn’t shake it. The eyes were visible through the rear windshield as his terrified passengers urged him on. When they reached town, the monster veered off and the couples quickly hunted down Deputy Sheriff Millard Halstead.

Halstead would later recall how shaken all four appeared. “I’ve known these kids all their lives. They’d never been in any trouble and they were really scared that night. I took them seriously.” Separated and questioned individually, all four told the same story. Halstead even drove back to the TNT with Roger Scarberry in any attempt to locate the creature but couldn’t find it.

The next day a press conference was held at the county courthouse with the Scarberrys and Mallettes relating their encounter again. It wasn’t long before the press dubbed the creature the “Mothman.”

Sightings would continue up until the tragic collapse of the Silver Bridge. Connecting Point Pleasant with Gallipolis, Ohio, the old suspension bridge buckled under the weight of rush hour traffic on December 15, 1967, claiming forty-six lives. Shortly thereafter sightings of the Mothman dwindled, then ceased altogether. As a result, the two events remain forever twined in folkore.

Was the Mothman a prophetic visitor sent to warn the town of the impending disaster, or was he something far more sinister? A demon? An alien? In A THOUSAND YESTERYEARS, I put my own spin on the legend of this mysterious creature.

Join me tomorrow for release day, and the tale of another sighting. In the meantime, take a look at A THOUSAND YESTERYEARS and pre-order your copy now for delivery tomorrow. Thanks for joining me on a journey of mystery and suspense that begins with… 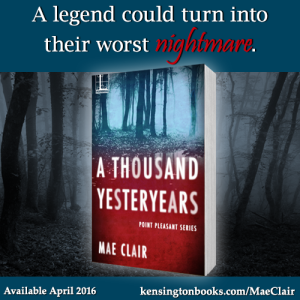 Behind a legend lies the truth…

As a child, Eve Parrish lost her father and her best friend, Maggie Flynn, in a tragic bridge collapse. Fifteen years later, she returns to Point Pleasant to settle her deceased aunt’s estate. Though much has changed about the once thriving river community, the ghost of tragedy still weighs heavily on the town, as do rumors and sightings of the Mothman, a local legend. When Eve uncovers startling information about her aunt’s death, that legend is in danger of becoming all too real…

Caden Flynn is one of the few lucky survivors of the bridge collapse, but blames himself for coercing his younger sister out that night. He’s carried that guilt for fifteen years, unaware of darker currents haunting the town. It isn’t long before Eve’s arrival unravels an old secret—one that places her and Caden in the crosshairs of a deadly killer…

56 thoughts on “Night of the Mothman by Mae Clair”