Look at me, posting three days in a row!

I have some pretty exciting news to share, so I couldn’t wait another day. Kensington Publishing is doing a Goodreads Giveaway for a paperback copy of my upcoming release, A THOUSAND YESTERYEARS. There will be two—count ‘em two—winners. The giveaway is open now through February 29th (how cool, a leap year). If you’re interested, you can enter here (I’d be jazzed if you did 🙂 ):

A THOUSAND YESTERYEARS is a tale of mystery and suspense centered around events that took place in Point Pleasant, West Virginia. You’ll discover a small river town plagued by tragic history and rumored sightings of the Mothman—a terrifying creature said to haunt an abandoned WWII munitions site.

The characters are everyday people facing extraordinary circumstances—secrets, betrayal, murder. If you’re a regular follower of my blog you’ve probably seen the blurb before, but I can’t resist sharing it again.  🙂 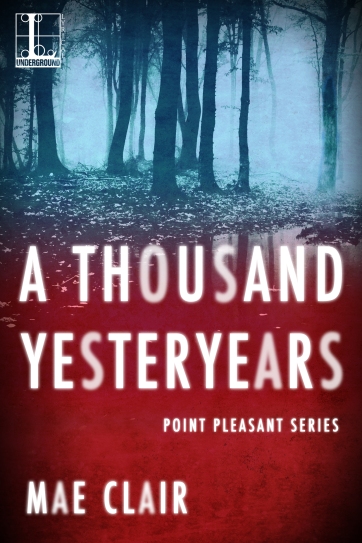 Behind a legend lies the truth…

As a child, Eve Parrish lost her father and her best friend, Maggie Flynn, in a tragic bridge collapse. Fifteen years later, she returns to Point Pleasant to settle her deceased aunt’s estate. Though much has changed about the once thriving river community, the ghost of tragedy still weighs heavily on the town, as do rumors and sightings of the Mothman, a local legend. When Eve uncovers startling information about her aunt’s death, that legend is in danger of becoming all too real…

Caden Flynn is one of the few lucky survivors of the bridge collapse, but blames himself for coercing his younger sister out that night. He’s carried that guilt for fifteen years, unaware of darker currents haunting the town. It isn’t long before Eve’s arrival unravels an old secret—one that places her and Caden in the crosshairs of a deadly killer…

A THOUSAND YESTERYEARS releases on April 26th, but the ebook version is already available from Amazon and all other major book sellers. If you’d like to pre-order you can find a complete list of links here.

In the meantime, sign up for the paperback giveaway at Goodreads and tell your friends! The Mothman Cometh! 🙂