Today, I’ve got a brand new guest on my blog, and I hope that you’ll make her feel welcome! 🙂 Karen Malena and I have several things in common beside writing–we are both “Keystoners” from the state of Pennsylvania, love cats (check out her author pic below), and both have an Italian family heritage.

I recently met Karen through a mutual friend, and am delighted to host her today with her compelling release, SOUND OF SILENCE. I think you’ll find her backstory inspiring as well. Please drop Karen a comment and say hello!

I’d like to thank Mae Clair for the opportunity to share a little about the ups and downs of life, from adversity to hope.

Adversity: Out of it can come great pain and sometimes great reward. Growing up the daughter of a mom who had a mental breakdown, I know a little about this.

When I was in fourth grade, it was a love of reading that would carry me through the toughest moments of my young life up until then. You see, my mother had been hospitalized for the first of many times, and it would be reading and the world of make believe that would bring me solace and comfort. With the world around me turned upside down, the love of a good father and my Italian nonna, books, and the desire to create my own stories would become the catalyst which held me together.

After a time, Mom was restored to us whole and well, a true miracle. It was then another bit of adversity would strike in the way of  my health. Looking in the mirror, I knew something was wrong with me, my body looked distorted but I said nothing to my mother, hoping perhaps it would “go away.” Of course no such thing happened, and when Mom noticed, a visit with a surgeon followed.

My battle with scoliosis was not an easy one. A year’s worth of hospital visits, major surgery and an all-encasing body cast would follow. Once again, it would be books and the world of my imagination that would help me through.

I’d like to think that it was all the challenges I went through that shine in my writing. The fact that I know a thing or two about tough times. When I write about a dysfunctional family, I know because I’ve been there. When I write gritty, and from the heart, I bare my own soul hoping perhaps to touch someone else who may be encountering difficulty.

Most of my books are inspirational fiction, but I’ve gone way out of my comfort zone with Sound of Silence. It bothers me when I watch a family of four sitting in a restaurant, each engrossed on their smart phones, game system, or I-pads. Nobody communicates; their eyes are glued to the almighty screen.

A thought began forming. What if we weren’t permitted to speak any longer? What if it became a punishable crime? Who would make such a decree?  What if that person was ruthless and had other reasons for silence, secrets perhaps that he wouldn’t want anyone to know about? And what if he was someone you trusted and liked, a handsome senator with a black heart?

Ray Warren is a good husband and father. In a moment of kindness, he helps an old woman who has fallen in a transportation portal, and when she thanks him, he answers her out loud in an era where speaking has been abolished.  The peacekeepers of the time, the brutal Stewards of Order hunt for Ray until he turns himself in. When he meets the dark-hearted senator, the dictator who rules our country in the year 2050, Ray isn’t intimidated by the man and in a brave show of defiance, he marks himself for termination. A seemingly kind Steward appears to help him, but does the Steward of Order have his own agenda and is something far more sinister at work?

Here is an excerpt from the first part of the book:

Morning came too soon. Now he’d have to answer to the accusation. There was no escaping the Stewards of Order, government agents with years of training in combat, military action and humanity control. Execution squads, they would stop at nothing to retrieve him. It was over. Ray was finished, all because he’d spoken out loud in an era overrun by communication devices; where the spoken word hadn’t been permitted in at least thirty years.

Ray glares at the government monitor, the cold metal listening apparatus mounted in the corner of every room, car and place of business. Knowing they can’t see him, he thumbs his nose in the direction of the hated box.

Ray slides out of bed. His parched throat aches, and his head pounds to the beating of his heart, the imminent hangover from last night’s bourbon indulgence. He glances around his room, grabs the jeans and button-down shirt he’d worn the day before and heads into the bathroom. What he sees in the mirror frightens him even more. Sunken cheeks, dark hollows under his eyes: a haunted, hunted look. Yes, that is correct. If he doesn’t answer the text, if he fails to show up at the Justice Premiere Tribunal Station, he will be hunted. How could he have been so careless?

Ray holds onto the edges of the sink and a silent scream forms in his throat. He turns the faucet on, splashing cold water onto a face that seems too pale.

While he dries himself off, he feels another emotion this morning: pity. He’s not sorry he tried to help the old woman. She’d reminded him of Bubbe.  Many years ago, he’d seen his beloved grandmother taken from the only home she’d ever known and loved. He remembered watching as the Stewards of Order had guided Bubbe into their vehicle, promising to take care of her, promising her lie after lie, not knowing they had every intention of exterminating her.

Ray sits on the edge of the bathtub, the towel gripped so hard in his hands, his knuckles turn white. What’s become of our society? Our privacy is completely gone, and with it, many, many people. Ray sighs as hopelessness shrouds itself around him. He remembers the day he discovered the forbidden newspaper—he was fifteen. . .

Stashed in a dark, cobwebby corner in his parent’s basement, Ray finds an ancient trunk he doesn’t remember seeing before. He opens the lid, peers inside, and his eyes light up at finding his grandmother’s personal effects. He picks up an old apron, threadbare and well-loved. He smells it, her scent still present, as if she once again stood before him. A wave of nostalgia washes over him.

Further down, a tattered paperback novel sits under piles of old clothing and balls of yarn. He digs even deeper and is rewarded with a crumpled, yellowing newspaper, worn completely through in spots.

Ray flattens the paper on the floor taking care as he smoothes it over with his hands. He looks around as if someone will catch him in this act of treason. His eyes squint in the dimness, and it’s there that he reads for the first time about the powerful politician Frank Tomlinson, humanitarian and nephew of the president, and how the order of silence came about.

Ray feels as if he’s stumbled onto the meaning of the universe. He never knew how the edict started; he’d been way too little. Sitting back on his legs, his eyes scan the article.

“After the historic 9-11 tragedy, terrorism and illegal immigration is at an all-time high in our country, leaving us vulnerable to further plots and waves of crime and destruction. Like cancer cells, these terror groups worm their way into our society. Nothing is sacred any longer, nothing is safe. Many of our own citizens are joining these radical groups. Thousands of innocent people are being killed. The recent church bombings, the explosions at our amusement parks, mass murder in our night clubs and malls across America have led to one man’s fight.

Senator Frank Tomlinson, nephew of President Carter Tomlinson has come up with a plan. Only the written or texted word can be monitored, he proposes. Speech has become dangerous, and truly useless in our society obsessed with electronic devices. He urges that communication devices linked to control rooms in government buildings and thousands of monitored computer systems are easy to track. Any terrorists or rebels would be found and dealt with instantly.

The government wants to protect you, fellow citizens. This is the only way to detect threats before they become a reality.

You will soon see news blasts on your smart phones, computers, televisions and all electronics. The spoken word will cease. We urge you to heed and aid us with the new law as it is put into place. We are implementing this for your protection. No longer will we have to fear tyranny from other countries. No longer will we be slaves to radical terrorism.”

Ray knew better. Speaking ended as a means to control revolt or uprising of the people. The only “protection” was the monitoring of any utterance against the officials themselves.

He’d heard that the crude cell phones of their ancestors had given Tomlinson the brilliant idea. People hadn’t been speaking anyway, the man had said. Yet hardly anyone knew the other reasons for the senator’s control of the spoken word. The secrets he kept.

I hope you enjoyed the little preview of my dystopian tale. As with all of my writing, this story has a thread of darkness with pockets of light. For to be true to ourselves, don’t we all have this within us?

Although I am presently working on sequels to some of my other stories, certain people have been clamoring for more of this one. Someone suggested a prequel and the prospect did excite me. I’ll keep everyone posted on the futuristic world I’ve created. A world that doesn’t seem too far away and even appears to be happening already.

Driven by one terrible secret, a powerful politician brutally suppresses speech for the sake of order and holds the country in the palm of his hand.

Ray Warren does the unthinkable. In a bold gesture he seals his fate in a moment of kindness, a moment that marks Ray, his wife, and beautiful daughter as dangerous fugitives and sets a society toward rebellion.

In Sound of Silence an ominous future is introduced leaving us with the question: What if? 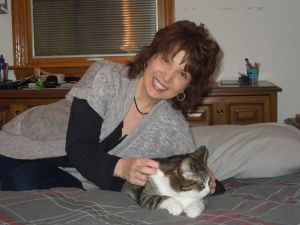 About the Author:
Karen Malena resides in the Pittsburgh area and is active in her community mentoring young writers and encouraging others through library and author events.

Three of her novels, Shadow of My Father’s Secret, Reflections From My Mother’s Kitchen and Love Woven in Time are inspirational family fiction. Her book Piggy is a fun cat “tail” for all ages.

She has currently released her first dark sci-fi book, Sound of Silence.

Malena has a biting sense of humor that you will find on her Facebook cat page, Piggy, and also writes heartfelt blogs at karenmalena.blogspot.com. She has a passion for storytelling, and many of the events she writes about come from her loud, crazy, close-knit Italian family.

She is a member of a monthly writer’s group, Pittsburgh East Scribes.

Purchase SOUND OF SILENCE from Amazon

Find all of Karen’s release on Amazon