I’ve got a super fun treat for you today with guest blogger Staci Troilo. We originally connected through Twitter and realized we had a lot in common: We’re both Pennsylvania girls and we both come from a strong Italian background. And, of course, we both love to write–and read. Staci’s latest release, BLEEDING HEART, is a fabulous 5-Star mix of supernatural and contemporary, political intrigue, history, familial bonds, mystery and more. She’s written a really cool post about the basis behind it, which I think you’ll enjoy. She’s also got a fun question for you at the end.

Thank you, Mae, for inviting me to talk to your readers today. I’m excited to be here.

Hi, everyone. I was so excited when Mae told me you guys are fans of the paranormal. I write many genres, but paranormal is one of my favorites.

The paranormal genre covers a wide range of topics—everything from witches to werewolves, vampires to Valkyries. I seem to like it all. But for one of my current series, I decided to combine my love of the supernatural with my heritage. I’m Italian, and probably obnoxiously proud of it. So when I think “Italy” and “supernatural,” I naturally came to one conclusion. 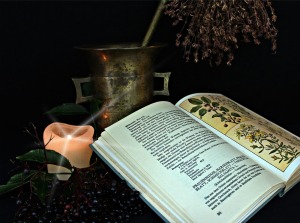 The Renaissance always fascinated me. The art, the architecture, the culture… absolutely captivating. So after a little bit of research and a lot of imagination (or maybe the other way around), the mythology of the Medici Protectorate series took shape.

I never really wanted to write historical novels, so I’ve based this story in the present, but with a heavy focus on the past. Without giving too many spoilers away, I’ll say that in this world, the Medici didn’t die out, despite what people believe. Generation after generation, they are watched over by a secret society. Until the day when Michelangelo’s prophecy comes to fruition and they are poised to rise again to rule Italy.

Sounds pretty realistic—prophecy aside, anyway. So where does the alchemy come into play?

The Protectorate who protects this line? They’ve been given marble daggers that Michelangelo created from his personal quarry, daggers that have been sculpted by the artist himself and forged in alchemical rituals to provide their wielders with specific powers.

Yep, that’s right. In this world, Michelangelo was an alchemist. Quite a successful one, at that. He achieved an alchemist’s ultimate goals—mutating metals and conquering aging. Can you imagine what that means in this world?

It means the man is still alive. Centuries later. And he has untold wealth, experience, and knowledge. Seems that would make him a formidable opponent. Unbeatable, even.

Wait until you see who rises to oppose him, though. It’s not going to be easy for the Protectorate.

The first book of the series, Bleeding Heart, just scratches the surface of the prophecy and the history. Here’s a description of the novel: 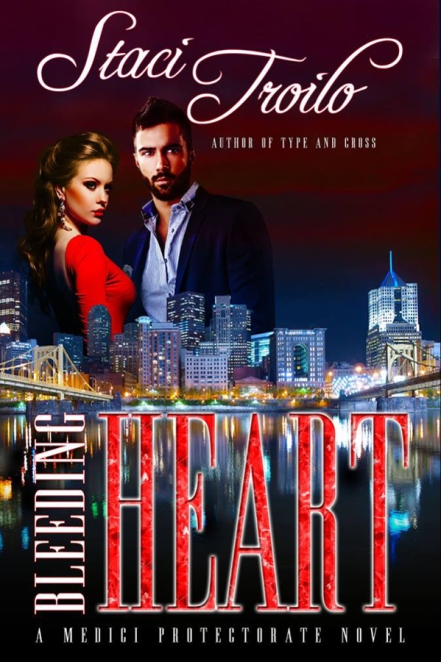 In the heart of Pittsburgh awaits a secret half a millennium in the making.

After her father’s brutal murder, Franki discovers she and her three sisters are the only surviving, secret legacy of the Medici. The same people who brutally murdered her father now target her and her family for assassination. Unprepared to battle an unknown enemy, she finds her safety depends on the Medici Protectorate, the warriors who guarded her bloodline for centuries, but who failed to protect her father.

Gianni, Franki’s protector, blows his first meeting with her, but knows he must garner the trust of not only Franki, but also her sisters. Without that, he fails too, and that is unacceptable—not only to him, but also to the Medici Protectorate. His troubles grow larger, for as he assumes his new role, he also undergoes inexplicable, explosive physical changes… transformations he can’t control. One of those is his uncontainable desire for Franki.

Their worlds collide in passion and violence, and Franki struggles to trust Gianni. When her life is on the line, Gianni will have to conquer both her fears and his own personal demons to rescue her in time.

The story takes place in Western Pennsylvania, where I was born and raised. It’s chock full of Italian traditions and familial relationships based on the culture I grew up in. Honestly, there’s something for almost everyone in there—good food, family bonds, steamy romance, political intrigue, secret societies, alchemical rituals, historical research, supernatural powers. Here’s an excerpt for you to check it out:

“Outside,” Coz was saying to Gianni, tentatively taking his arm. “I think we should get you outside.”

“No,” Vinnie said. He crossed the room quickly and everyone turned to look at him. He grabbed Franki’s hand and dragged her over to Gianni, throwing her into his arms. “Kiss her.”

“What?” Gianni shook violently, tried to back away, but couldn’t. He seemed somehow rooted to the spot. “Are you crazy, V? I’m losing it, here. I can’t be near anyone, let alone…” He looked at Franki and pain seized him.

“Trust me. It will settle you.”

“We need some help in here,” Toni called from the kitchen.

“Go ahead, Francesca. He will not harm you, and he needs your help.”

“Who the hell said that?” Jo shrieked.

Gianni knew where that voice came from, and who it belonged to, but he was far from willing to trust it. Franki seemed hell-bent on listening, however. He shook his head, but she took his face in her hands and pulled his mouth to hers. Then something inside Gianni exploded.

Yeah. As the description said, Gianni is struggling to get a grip on his new powers. And as you might have guessed, when the sisters and the Protectorate get together, there’s often a little tension and a lot of action. The word “chaotic” comes to mind. But I wouldn’t have it any other way.

The second book, Mind Control, is in final revision now, and picks up where Bleeding Heart ends—with the sisters’ being hunted and the Protectorate still coming into their powers. It will be available in the spring.

I hope you enjoyed this brief look at the Medici Protectorate world. Clearly, the Italian culture and potential of alchemical rituals fascinate me. But now I’m curious. What are your favorite supernatural creatures or powers to read about? Leave a comment; I’d love to talk about it.

Thanks again for letting me visit today. It’s been a blast!

About Staci:
Staci Troilo has always loved fiction, ever since her parents read her fairy tales when she was little. Today, her interests are much more eclectic. She loves getting lost in sci-fi battles, fantasy realms, horror worlds, suspenseful intrigues, and romantic entanglements.

As goes her reading, so goes her writing. She can’t pick a single genre to focus on, so she doesn’t even try. She’s proud to say she’s a multi-genre author.

When she’s not reading or writing, she’s spending time with family and friends, possibly cooking for them, or maybe enjoying an afternoon in the pool. To learn more about her, visit http://stacitroilo.com, join her private Facebook group (Staci Troilo’s Novel Idea), subscribe to her newsletter, or connect with her on social media.

63 thoughts on “Guest Blogger Staci Troilo on Alchemy, Michelangelo, and the Protectorate”