When I was a kid, I loved the whimsy of fairy tales and magical adventures. At fifteen, I discovered the world of fantasy, thanks to a wonderful English teacher who gave me a copy of The Fellowship of the Ring. I remember being enthralled, and started devouring everything magical I could get my hands on. How I wished there had been tales of unicorns, dragons, and castles to whisk me off to adventure when I was in grade school!

Today, I’m delighted to introduce you to K. C. Huffington, a wonderful author and fabulous blogger who is here with his enchanting release, THE MAGIC OF GEO. Please say hello to K.C.!

I started writing under the name of K.C. Huffington to separate my children’s/young teen’s works from works I’ve already published, and some others in progress to avoid any possible mix up. IE; someone who’s bought one of my children’s works, sees my name, thinks, oh yeah… and purchases one of my other books for their young teen, or child… not something I would want to happen. And I’d be very upset if it did. Not so bad in the Vice Versa situation, but still, you get the drift.

But why? Because, with the exception of one, which I have republished under the name K.C. Huffington, my prior works mainly deal with issues of child abuse, neglect and related issues to being raised by a dysfunctional family with scenes which are not suitable for children of any age. K.C. Huffington.

K.C. Huffington is a fantasy author who writes both Children’s/Teen’s fantasy novels/novellas.  He has just published his debut Children’s Fantasy, The Magic of Geo and is currently working on his  second fantasy book, Unicorn Magic which he’ll post more about as it develops.

He spent many years teaching and lecturing, English, and Literature in a variety of classroom settings. K.C. had the wonderful privilege, and experience of being a voluntary reading mentor for children in a public library and knows how important it is for children and teens to read stories that can teach real life values and this reflects in his own work. 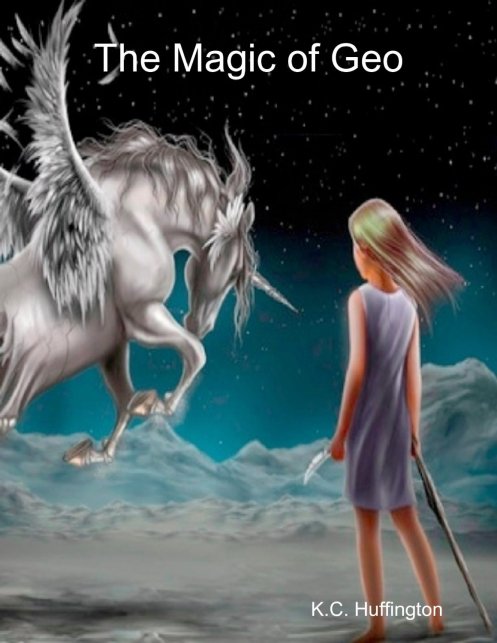 The Magic of Geo

Originally published as The Wizard, The Girl and The Unicorn’s Horn, The Magic of Geo is a fantasy adventure that take us to a magical land where goblins, trolls and simple folk live in relative harmony under the guidance of a wizard who helps them resolve the general problems that arise from time to time. The wizard meets more than his match when the evil shadow comes and mysteriously whisks all the people away. He holds them captive in the caverns beneath Geo in an attempt to lure the wizard to his doom and steal the Magic of Geo.

The fate of Geo rests now rests in the hands of an old worn out wizard, a ragtag bunch of goblins, and a mysterious little girl who bears the unicorn’s horn. They must find the people and save the magic of Geo, but how will they be able to stand up against the powerful evil shadow and his demon hordes? To find that out, one must read, The Magic of Geo.

Elyysa walks through a village. It’s empty, lifeless. Just like the others, she thinks. It is the fourth village. Up ahead is a river. It is the third river she will have crossed. Suddenly, she has an idea.

“Why didn’t I think of this at the last river or the one before it?” she suddenly asks herself.

As with the previous two rivers, she reaches into her tunic for some change to pay the troll guarding the bridge. She pauses, and looks at the troll who is sitting there watching her and waiting.

Trolls are strong creatures that pride themselves on their strength. They actually sleep under their bridges while supporting them with their backs. They can tell if someone is crossing the bridge while they are sleeping. Although very close to their own kind, they are not overly friendly, are short-fused and not ones for much talking.

At the last two bridges, Elyysa simply paid her fare and went on her way with a thank-you. This time she stalls, purposefully, pretends to fumble around for change, looks up at the troll and says,

The troll hunches her shoulders and eyes Elyysa intently.

“Do you know what has happened to all the people in the villages?”

The troll shakes her head from side to side as in a definite “no”.

“Well, the shadow took them.”

The troll’s eyes widen in interest and Elyysa feels encouraged to carry on.

“Didn’t you trolls see the shadow?”

“Yes.” It’s the first time that the troll has spoken.

“How come the shadow hasn’t taken trolls as well?”

“We see shadow, feel danger and hide under bridges.”

“What! Great trolls are afraid of the shadow?” Elyysa pretends to look amazed.

The troll is irritated by Elyysa’s question…

The Magic of Geo is available from:

The Magic of Geo is on special offer at Lulu and can be downloaded to read on almost any device. Check out the Lulu site for details. :

All social media links can be found on his site.

27 thoughts on “Mae Clair Presents: The Magic of Geo by K. C. Huffington”