It’s always fascinating when I stumble upon a new creature in my ongoing searches for all things odd, mythical, or cryptozoological. Even more rewarding when I discover a beastie from my native state of Pennsylvania.  Today, I’d like to introduce the Squonk.

Doesn’t the name sound like something out of Dr. Seuss or Jabberwocky? I love saying it. Give it a try… “Squonk.” It makes me want to cuddle the poor thing.

As it turns out, the squonk could probably use a good cuddle— assuming you could get past its ghastly appearance.  A mid-sized animal that goes about on four legs, the squonk will never win a beauty contest. Its skin, which sags and flops on its frame, is covered in a mish-mash of warts, boils, and moles. 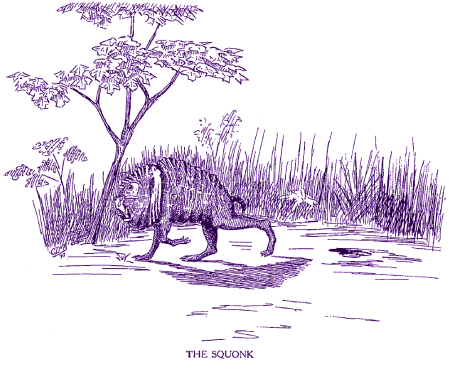 Said to favor the dense Hemlock forests of Northern Pennsylvania, this pitiful creature spends most of its time hiding and weeping, ashamed of its grotesque appearance. Bashful and retiring, it usually ventures out at dusk when it is less likely to be seen. On nights illuminated by a full moon it prefers to stay completely hidden, fearing it might otherwise catch a glimpse of its reflection in a pond.

Numerous hunters have attempted to capture a squonk, tracking the animal by the trail of its tears. All have failed. If cornered, or even frightened, the squonk will quickly dissolve into a puddle of tears.

How terribly sad is that?

Legend tells of a particularly clever hunter who was able to lure one of the creatures into a sack. He quickly tied the bag and hefted the beast over his shoulder for the stroll home. Halfway there he realized his burden had grown incredibly light. When he looked inside the sack he discovered nothing but liquid—all that remained of the woefully despondent squonk.

Although it’s not entirely clear from the research I’ve done, I tend to think the squonk reverts back to its physical form when the threat has passed—and most assuredly begins weeping again.

Given its pitiful existence, I hereby nominate this Mythical Monday as “Hug a Squonk Day.” Assuming, of course, you can catch one long enough to brighten the poor thing’s dismal existence!