I’m hijacking Mythical Monday again this week because I’ve got news I’m anxious to share. And in many ways, it relates to my love of folklore, mythology, and urban legends. In fact, it all started with a Mythical Monday post in 2013. 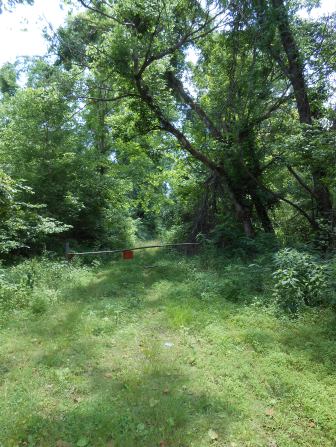 A shot taken within the TNT, an old WWII munitions site the Mothman was rumored to haunt

Many of you know I’ve been working on a novel that utilizes the legend of the Mothman. I submitted that book, A THOUSAND YESTERYEARS, to my editor the end of March. She got back to me in good time and suggested a few changes. I took care of those and returned it to her in mid April, after which it was sent up the line to a senior editor for final approval. That’s when things got a little nerve-wracking.

Would he like it? Would he reject it? I hated the thought of having to submit elsewhere, but Kensington Publishing is a quality house, and I knew if I wanted to publish with them this was the process I needed to go through. I tried to put the whole thing out of my mind, fully aware it would be several months until I heard anything one way or the other.

Since A THOUSAND YESTERYEARS is the first novel in my Point Pleasant Series, I dove into research for book two and even took a trip to the town, which is located in West Virginia. Two days before I was scheduled to leave I received news that the manuscript had been accepted. YES!!  And not only that, but Kensington Publishing agreed to give me a 3-book contract for all the novels in the series. SQUEEEEE!!

It has been exceptionally hard sitting on that news. I wanted so badly to share it, but I’m superstitious at heart, so I decided to wait until contracts had been received and signed. That’s all been done now, and I’m over-the-top delighted to announce the Point Pleasant series. Here’s the release schedule:

Book 1, A THOUSAND YESTERYEARS will be released April of 2016

Book 2, A COLD TOMORROW will be released December of 2016

In the past, my imprint with Kensington has been Lyrical Press. Moving forward with this series, the books will be released through their brand new sub imprint dedicated to suspense, mystery, romantic suspense, and thrillers—Lyrical Underground. I’m highly jazzed about that, because, although there is still a romantic suspense theme in all three novels, the mystery angle is far stronger than anything I’ve done in the past.

When I think back, this entire series started with a Mythical Monday post I wrote on February 4, 2013. At that time, I knew about the Mothman, but only that the creature was a winged humanoid with glowing red eyes. After writing that post, I really wanted to write a novel playing off the mythology of the legend. It’s interesting how even the blog comments reflect that. If you’re curious about the post that started the whole thing, you can find it here.

Now, I need to get cracking writing books two and three. Here’s a brief overview of the whole series. Note that the blurb for book 1 is not official at this point, and for books 2 and 3 I’ve only done short teasers:

Sometimes silence is the same as murder

On a cold December night in 1967, the Silver Bridge between Point Pleasant, West Virginia and Gallipolis, Ohio unexpectedly collapsed during the peak of rush hour traffic claiming forty-six lives, many perishing in the frigid waters of the Ohio River.

Just a child, Eve Parrish lost her father and her best friend, Maggie Flynn. Now, fifteen years later, she returns to Point Pleasant to settle her deceased aunt’s estate. Much has changed about the once thriving river community. The ghost of tragedy still weighs heavily on the town, as does the legend of a giant winged creature known as the Mothman, said to haunt an abandoned WWII munitions site.

Caden Flynn is one of the few lucky survivors of the bridge collapse, but blames himself for coercing his younger sister out that night. He’s carried that guilt for fifteen years, unaware there are darker emotions than grief tangled up in the Silver Bridge tragedy.

Eve’s arrival triggers the unraveling of a fifteen-year-old secret that places her and Caden in the crosshairs of danger.  A secret more terrifying than the bridge collapse and the frightful legend of the Mothman.

A murderer stalks the streets of Point Pleasant.

When Katie Lynch stops to help a disabled motorist, she unwittingly finds herself caught up in a web of intrigue involving flying saucers, mysterious men in black, animal mutilations, and the Mothman. Together with Officer Ryan Flynn, Katie attempts to decipher a coded message that points to the arrival of an extraterrestrial visitor.

To placate his sister who believes their family’s history of misfortune is tied to a centuries old curse, Quentin Marsh travels to Point Pleasant, West Virginia, hoping to uncover the truth about an Indian chief’s brutal murder. Did his ancestor participate in the ugly execution of Shawnee Chief Cornstalk, and how is the Mothman, a flying humanoid that has haunted the area for decades connected? Does local history buff, Sarah Sherman, hold the answer to breaking his family’s curse?

So what do you think? Do I have you intrigued?

52 thoughts on “Announcing A Thousand Yesteryears by Mae Clair”