I’m delighted to welcome Flossie Benton Rogers, author of the Wytchfae series back to my blog today. One of the things I love best about Flossie’s books is the amount of world-building she does. Characters, creatures, and mythical elements are so vivid and engagingly crafted, they leap off the pages. Today, she’s going to share some of the inhabitants of her fantastic world, including those who populate her new release, DEMONESS DREAMS. Please welcome Flossie Benton Rogers!

Hi, Mae! Thank you for featuring Demoness Dreams today. Since you and I are both interested in mythology and folklore, I thought we’d start by talking about the fae dimensions in my books and a few of the beings that inhabit them.

The Wytchfae World: The realms encountered in the Wytchfae series of paranormal romance / urban fantasy novels are closer to us than a hair’s breadth. These mysterious places are populated with faeries, witches, demons, angels, goddesses, dark guardians, ghosts and other magical beings. The beings dwell in multiple dimensions parallel to our own earth dimension. Some of the worlds are welcoming, others dangerous and forbidding. Through the darkest night and the fright of unchained chaos, love will always shine.

Wytchfae: Trained witches who possess a smattering of fae blood. Although they live on our regular earth plane, some of them visit other worlds as well as other times. Different Wytchfae have different abilities.

Warriors: Some warriors live on the human earth plane and some in the fae dimensions. In the latter, warriors are charged with carrying out plans for powerful magical beings such as goddesses and dark guardians. They sometimes gain prestige for their bravery, such as Bane Heughar’s acclaim as Odin’s Warrior, and obtain a domain of their own.

Salamander Fae: Fire elementals that assist Helle, the Goddess of the Underworld, in spells and ritual work deep in the recesses of her dark abode.

Ice Trolls: Huge bluish beasts that look like a cross between a lumbering lowland ogre and a gigantic highland snow beast. They live in the mountains and attack travelers in the snowy dark.

Grims: Creatures contained in a certain area of the Underworld.  Unfortunately for humans, their nourishment comes from sucking out a person’s life energy via memories. Grims also relish the taste of human blood.

Remnants: Grims who have degenerated into mindless, zombie-like slugs due to not having access to enough “food.”

Dark Guardians: Powerful male demigods who are in charge of various domains, such as the undersea realm and the empty void between dimensions. 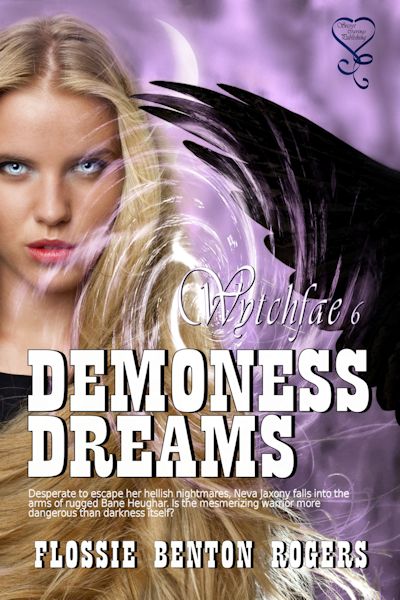 Demoness Dreams – Wytchfae 6
Desperate to escape her hellish nightmares, Neva Jaxony falls into the arms of rugged Bane Heughar. Is the mesmerizing man more dangerous than darkness itself?

Blurb: Heaven or hell? Dream or nightmare? Where passion is concerned, the veils are thin.

As her Wytchfae powers intensify and nightmares invade her waking reality, Neva Jaxony seeks answers in the shadowy past. Then a mysterious stranger enters the picture, and she falls hard. Is he the man of her dreams or part of the darkness that threatens to consume her?

Acclaimed warrior Bane Heughar has orders to prove Neva is not dangerous– or kill her before she can turn demon.  He never expected to find her so bewitching, or so damn desirable. He has until the Solstice Moon to carry out his mission. All he really wants to do is take Neva in his arms, kiss her senseless, and for the two of them to disappear off the radar. But when the Underworld is involved, no one can hide.

Desperate to escape her hellish nightmares, Neva Jaxony falls into the arms of rugged Bane Heughar. Is the mesmerizing man more dangerous than darkness itself?

Teaser: He was hard pressed to remember his mission, when all he wanted to do was stash her in his bed and make love to her all night long.

Hell was the last place Bane Heughar wanted to visit. When the Goddess of the Underworld summoned, you never knew whether it was for tea and scones or to scourge you bloody. Maybe you’d get out in one piece, or maybe twelve. The pulse in his throat thudded at the sight of Helle’s grim expression.

The tautness of her face indicated disturbing emotions rippling beneath the surface. Her flaxen hair framed strong cheekbones, and her wintry grey eyes glittered. She reminded him of one of her showcase fountains—an icy lake with fiery jets that spurted upward and then crashed in startling and unpredictable abandon.

She extended the tips of her fingers. “Warrior.” The scent of jasmine wafted into his nostrils.

He bowed his head to bestow a respectful kiss. “Goddess Helle. How may I be of service?”

“Come with me.” She swiveled, and a bodyguard advanced beside her. She thrust out a palm. “Halt! You shall remain here.”

The uniformed man appeared bewildered. “But Goddess, your safety is my utmost responsibility. I beg you—”

Her visage turned thunderous. “Stay, I say. I will speak to the warrior in private.”

Beckoning for Bane to follow, she led him beyond the entryway of her palace, past her abode and deep into the tunnels of her cavernous domain. The pathways wound around until he doubted even his well-honed sense of direction could extricate him if she left him to find his own way.

What did she have to discuss with him that her own trusted guard could not hear?

A surge of adrenalin sizzled throughout his body. He had never ventured this far inside Helle’s mysterious netherworld. She appeared to be leading him deep into one of her innermost sanctums.

At last they came to a rounded crystal enclave where gleaming spears of quartz grew in wild abandon from the rocky walls and ceiling. The crystal luminescence created a dazzling bombardment amid the strategically situated torchlights. The power generated in the room heated his blood until his ears pounded. He cleared his throat to alleviate the pressure.

Helle made her way to a great tripodal cauldron perched on an array of low rocks. “Salamander fae, forged of earth’s blood, ye living fire, be at peace.” She fluttered her fingers, leaving a shimmering ripple in the air.

The flames beneath the tripod curled blue tendrils around the edges. Bane stepped closer. The tiny salamander fae, tenders of the sacred element, faded into the shadows, giving way to the Goddess. Their movement resounded in the enclave like the faint whispers of hissing steam.

The Goddess Helle swirled her hands back and forth over the cauldron and recited a strange incantation.

Even with his magical fae ability to understand foreign tongues, Bane couldn’t make out all the words. The language probably died out before humanoids rose on two limbs.

The water in the ancient cauldron churned and spewed in the presence of the Goddess of the Underworld. A shape formed in the vessel. The image blurred with the movement of the liquid and then stilled to reveal a stunning face. The woman’s hair glimmered like a halo of spun gold. A light kindled her exquisite features as if she looked upon a dazzling sight. A pleasurable thrill thrummed in the middle of Bane’s chest. When he spoke, his voice came out a whisper. “Who is she?” 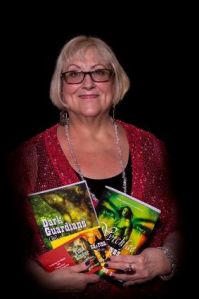