Today, I’m happy to share in the celebration excitement for my friend and sister author, Daisy Banks. She has a new release, MARKED FOR MAGIC, which she’s dropped by to tell us about. Take it away, Daisy  . . . 🙂

Thank you so much, Mae, for helping me celebrate the release of my latest book, Marked for Magic, published by Lyrical Press, a Kensington Imprint, on the 28th of April 2015.

I decided that as palmistry was the initial inspiration for this fantasy romance I’d offer you and the readers a little something on palmistry marks.

This image is of the main lines most people have on their palm: 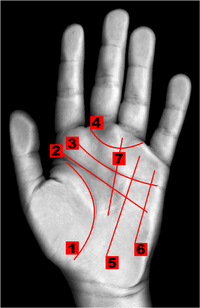 These main lines above and their meanings are fairly well known, but the lesser lines are not quite so well understood and it was these I was studying when I got the idea for Marked for Magic.

For this post I have chosen the teacher’s square. You will find this on the Jupiter mount, the pad of flesh beneath your forefinger, or Jupiter finger. This is the sign of someone who is a teacher, it may not be a school teacher but anyone who tutors, or imparts and shares knowledge on any subject.

Thanks so much for reading. I’d love to know if any of you discover a teacher’s square in your hand. Let me know.

Blurb:
The witch mark on Nin’s hand is a curse. She has no magic powers, whatever the lore says. But the village believes. The old crone’s wisdom is to see her banished. Ragged and hungry, she must serve the Mage. Alone in his tower, she is his chattel. But Mage Thabit is not what Nin expected—the bright green eyes and supple form under his cloak are not the stuff of nightmares, and kindness hides in his brusque heart. Thabit senses that Nin is more than she seems, too. When true nightmares haunt the land, it is precisely her elusive powers that might deliver them…

Excerpt:
“After we eat, I will find you something clean to wear. The gown you have on is less than pleasant. What is your favorite color?”

She sat opposite him. “Red.” She picked up the spoon.

“A bold choice.” He placed the porridge in front of her.

This should be easy. His charm on the cloth would show him how susceptible she might be to all manner of magic. While she ate, he went up to his room where he sorted out a long sleeved, knee length tunic he’d worn in his youth. One of the last his mother had made. A good quality cloth, decorated with a little embroidery at the collar. The only patches were on the elbows of each sleeve. Perhaps the tunic would be long enough to gown her small frame. He returned with it tucked under his arm.

She had eaten and sat worrying at the bandage.

“Here, Nin, as fine a red as you will ever see. You can wear this while you wash the dirty gown.”

Her brows drew together. A little wrinkle appeared on the bridge of her nose. She raised a questioning glance as she took the tunic.

“Thabit?” The soft whisper came again along with the down-swept lashes.

Things would be far easier had they not made her so afraid. He picked up the spoon, intrigued by her thoughtful expression. “Yes.”

“This isn’t red. It’s very nicely made, but this is blue. Is it what you meant me to have?”

He dropped the spoon in the bowl. Unless his skills had slipped, his little sparrow had seen through one of his simplest but most effective glamours. “By the gods of the waters, Nin, you may have a talent after all. I know the tunic is blue, but it should fit you well. You put it on.”

About the Author:
Daisy Banks writes sensual and spicy romance in the Historical, Paranormal and Fantasy genres. She is an obsessive writer and her focus is to offer the best tale she can to readers. Daisy is married with two grown up sons. She lives in a converted chapel in Shropshire, England. Antiques and collecting entertain Daisy when she isn’t writing and she occasionally makes a meal that doesn’t stick to the pan.