Two days ago I do what I do every year when the first Saturday of May rolls around—I look forward to enjoying the Kentucky Derby. I have several friends online who know a great deal about horses (you know who you are 🙂 ). I actually know very little, just that I’ve been fascinated by them since I was a kid. What little girl doesn’t dream of owning a pony? To this day, there is a tradition in my family when anyone has a birthday and is preparing to blow out the candles, we all say “Wish for a pony!” This comes from the number of people in my family who wanted ponies when they were kids (as it turns out, one of them ended up with several horses).

Back to the Derby.

Hubby and I had a quiet Derby Day at home this year. We grilled, enjoyed the beautiful weather and relaxed with mint juleps on our back porch. It was the first time we’ve made them. Probably the last, too, as neither of us liked the simple syrup that goes into the drink.

For the running of the roses, I chose American Pharaoh as my pick.

Now before you say I hopped on the popularity bandwgon, I always pick my horse based on its name. Yeah, I know…real scientific and all that. What can I say? I love names and had a reason for picking this one. I watched both Gods and Kings and The Ten Commandments over Easter, so I was focused on the Pharaoh thing.  Turns out American Pharaoh was the favorite coming in and ended up winning the Derby. YAY! 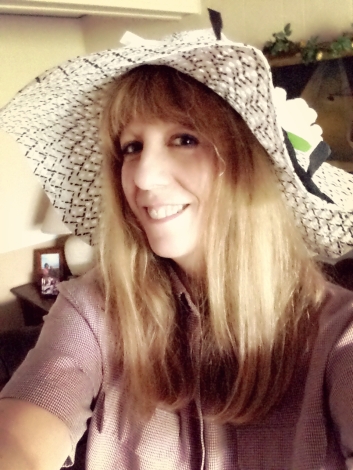 And although I didn’t have a fancy Derby Day hat to celebrate, I did wear a floppy spring hat in honor of the event. (Yep, that’s me at the right. Loved the hat; hated the Julep).

So why all this focus on the Kentucky Derby? Because one of the things that stands out for me as a kid was seeing Secretariat take all three races of the Triple Crown in 1973.  Do you realize no horse has won the Triple Crown since Affirmed in 1978? Quick math: that’s thirty-seven years!

I really want to see another Triple Crown winner in my lifetime. Desperately. So every year I watch each race in the Crown event and hope it will happen. It’s kind of like seeing Haley’s Comet or something.

What does all of this have to do with myth? Nothing really, except that I thought it would be fun to take a look at some of the superstitions associated with horses and racetracks. As an example, did you know that the color of a horse’s feet plays into superstition?  One white “sock” on a horse is considered good luck, but four is considered bad. There is even a short verse to that extent:

Here are some other superstitions related to horse racing and jockeys:

Peanuts are extremely bad luck and are banned in barns

Never name a horse after a family member

Don’t ship a broom from one track to another

And some old superstitions related to horses in general:

A horse’s tail, if placed in water, will turn into a snake

A horseshoe hung in the bedroom will prevent nightmares

If a horse stands with its back to a hedge, it’s a sure sign of rain

As with most things superstitious, I’m sure there are plenty more. Do you know any I missed? How about the Kentucky Derby? Were you cheering on American Pharaoh, too? Have you been lucky enough to see or remember a Triple Crown winner from the past? I’d love to hear your thoughts!

21 thoughts on “Mythical Monday: Of Horses and Superstition by Mae Clair”