I’ve got another great cover reveal for you today. Most of you know I have a slight *ahem* passion for mythology, and folklore. Urban legends and fairy tales are no exception, so it goes without saying I’m jazzed to participate in this cover reveal for my Lyrical Press sister, Cate Masters. Behold, THE GRIFFIN’S SECRET! 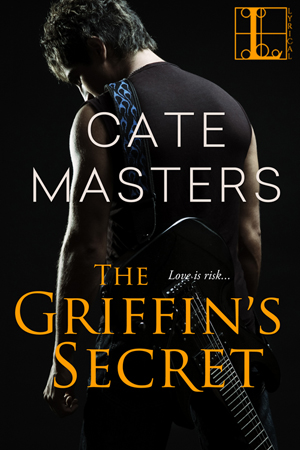 In this contemporary re-telling of Grimm’s classic fairy tale The Griffin, two people must risk everything to free themselves from the invisible prisons that keep them from love…

Jackson Grant had it all—the girl he loved, his Harley, and his guitar. Until a tragic accident stole it all away. Now, more than scars and a tattoo remain. Jackson has a secret. Cursed by his dead girlfriend’s mother, he can never fall in love again or his beloved will die. With his heart on lockdown, he keeps to himself—until a roadie gig with Malcontent, the world’s most popular band, entwines his fate with sweet, wounded Layla’s…

Music is what Layla lives for. She has no choice. She’s bound by magic to serve Malcontent, cursed to propel them to stardom with her musical powers. Then Jackson appears and gives her hope that he’s the hero who will save her. A reluctant hero, yet one she can’t resist. But freedom will come at price—and who will pay…?

Excerpt
The faint scent of an exotic flower on an ocean breeze hit him the second the girl walked in. Every part of his body stood at attention, taking in the way she moved. The curve of her slender hips. Those long legs…they’d wrap around the back seat of his Harley perfectly. Wrap around him perfectly, too.

A flip of her onyx-silk hair sent it behind her shoulder as she sat opposite. “Who are you?”

Good question. He’d been seeking the same answer for too long. “Jackson Grant.”

Her eyes darkened, deep brown to charcoal diamonds. “Why are you here?”

“For the roadie job.” Was she the first gatekeeper? A gate she kept locked, he’d bet. Or maybe she was another test. Kev had warned him there’d be tricky questions and to answer straight. Something told him she asked out of curiosity.

“You think you’re up for such a demanding job?”

Again, the impression hit him she was making these questions up as she went along, ad-libbing off his replies.

He’d play. “I’m strong. Dependable. I follow orders, keep my head down, and stay out of trouble.” And he liked his privacy.

Her features smoothed, hard as porcelain. “Do you.” Not a question.

Did disappointment curl her lip? Or boredom? Why did he care? If he could, he’d blast out of there before his own curiosity got the better of him. Already, she’d gotten under his skin. Crazy how the tat no longer singed him, but now twisted like a trapped animal.

With a plastic smile, she batted her eyes, and the false flirtation didn’t suit her. “So. You’re a yes-man.”

The way she said it, he’d be no different than any other roadie serving the great rock star, Malcolm Fetterman. Fine by Jackson. The less he stood out, the better. Except for her. He hated to think of her glossing over his presence, but that would be better, too.

He drummed his fingers on the table. “I need the job.” Where the hell was Malcolm anyway? The longer he stayed with her, the more he wanted to. Definitely couldn’t afford that kind of trouble. He glanced at the open door, hoping he wouldn’t have to go through the same interrogation again.

She tapped the table. “You’d have to travel constantly.”

“Perfect.” No different than his usual way of life. Except this time, his paycheck would remain steady.

“You wouldn’t miss your family?” She dipped her head. “Your girlfriend?”

He curled his lip this time. No one’s business but his. He shifted in his seat. “They’re better off.”

Her brows knit, and then her expression became unreadable as the Sphinx. “The hours are long, and the equipment’s heavy. Everything has to be exactly as Mal orders.”

Did he imagine it, or had she winced at her own words?

He shrugged. “It’s his show.” Someday, Jackson would have his own roadies. And would treat them much better than Malcolm Fetterman did, if the stories proved true.

Her steely focus cut into him. “Mal doesn’t hire musicians except for those in the band. And there aren’t any openings in Malcontent.”

He didn’t allow himself to blink. “No problem.”

“But you play, don’t you?” Her gaze dropped to his callused fingertips drumming the tabletop.

He drew his hand down. “No.” A necessary lie. She might suspect, but couldn’t possibly know the truth. Almost like leaving one of his limbs behind, he’d locked his Fender in storage in New Jersey with his paltry possessions for six months. By then, he’d know whether this gig worked out.

About the Author
Cate Masters has made beautiful central Pennsylvania her home, but she’ll always be a Jersey girl at heart. When not spending time with her dear hubby, she can be found in her lair, concocting a magical brew of contemporary, historical, and fantasy/paranormal stories with her cat Chairman Maiow and dog Lily as company. Look for her at http://catemasters.blogspot.com and in strange nooks and far-flung corners of the web.