Jessi Gage is back with a “cool” new release!  ‘Tis the season for holidays and romance, so you won’t want to miss COLE IN MY STOCKING, Jessi’s delightful holiday story. 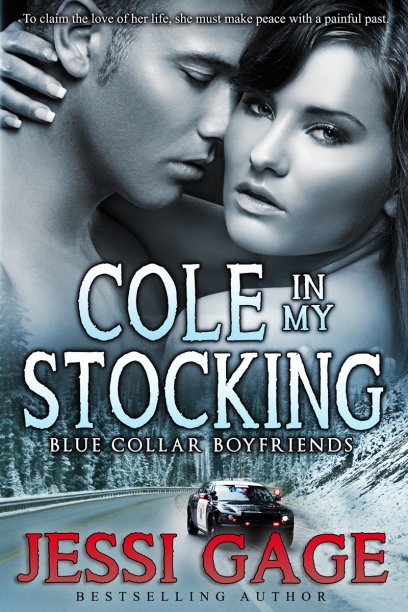 Blurb:
Mandy never planned to return to Newburgh, New Hampshire, the hometown that unfairly branded her a slut, but she has no choice. Her father has died, and she’ll be spending Christmas settling his affairs. She hopes to get in and out of town without attracting the looks of disgust that drove her away, but when a certain Oakley-wearing, Harley-riding cop starts hanging around, an old crush is revived and the rumor mill restarts with a vengeance.

Cole has always been attracted to Mandy, but he has never acted on it. Besides being sixteen years older than her, he was friends with her father. The rumors people in town spread about her were bad enough without an inappropriate relationship adding fuel to the fire. But when Mandy returns to Newburgh fully adult and looking more gorgeous than ever, he can’t keep his distance, especially when an old secret of her father’s surfaces and puts her in danger. He’ll stop at nothing to protect her, but convincing her to stay in Newburgh, with him, will take a Christmas miracle.

Reader Advisory: Contains references to a past sexual assault

Excerpt:
Lamenting my lack of AAA membership, I trudged back to the driver’s side door and climbed in. My best friend Heather had given me a heated seat pad for the trip. I nestled into the welcoming warmth and fished my insurance card out of my wallet. I was pretty sure my insurance company provided roadside assistance. But would it make my rates go up if I used it? Surely not. I hadn’t gotten in an accident. It was just a stupid flat. Living in down-town Philly on a social worker’s salary, I could barely afford to keep the beast in Valvoline oil and low-grade gasoline. Higher insurance rates were out of the question.

Hoping for the best, I dialed the 800 number. A sharp knock on the window made me yelp.

My phone clattered into the inaccessible abyss between my seat and the console. I’d lost countless spare change, Chap-Sticks and morsels of Chex Mix to that abyss. If anyone ever plumbed its depths, they’d be sure to find fossilized remains of lost species of gas station foods and thriving colonies of automotive dust bunnies.

And my cell phone. Crap.

I turned the full force of my scowl on the perpetrator, forgetting to be fearful until the height and breadth of the person registered.

A man. Crowding my window and blotting out the light of a faraway streetlamp. Panic made a fist around my heart.

I slammed down the door lock with one hand while feeling for my cell phone with the other. Duh. Empty cup holder. Nine-one-one was not an option.

Meanwhile, my eyeballs strained to make out the man’s face, and I realized why it was so difficult. The wide brim of a tan state trooper hat left all but the man’s square chin and firm mouth, which was surrounded by five-o’clock-plus-two-extra-days stubble, in shadow. That mouth was as unforgiving as rebar. When it moved with a glass-muffled “Everything all right?” it offered a glimpse of slightly crooked lower teeth.

I knew those teeth. That mouth. That chin with the faintest of dimples in the center.

It had been so long.

The knot of panic in my chest simultaneously unwound and morphed into mortification. Of all the people I’d planned to avoid on this trip, Cole Plankitt topped the list.

Purchase COLE IN MY STOCKING from:

Jessi Gage bio
Jessi lives with her husband and children in the Seattle area. She’s a passionate reader of all genres of romance, especially anything involving the paranormal. Ghosts, demons, vampires, witches, weres, faeries…you name it, she’ll read it. As for writing, she’s sticking to Highlanders and contemporaries with a paranormal twist (for now). The last time she imagined a world without romance novels, her husband found her crouched in the corner, rocking.

Connect with Jessi Gage at the following haunts:

12 thoughts on “Mae Clair Presents: COLE IN MY STOCKING by Jessi Gage #HolidayRomance”