I’m delighted to have Gemma Brocato as my guest blogger today. You’re going to love this post! Grated cheese, anyone?

I have a noodle brain.

Years ago, I heard a comparison on the difference between a male brain and a female brain. Apparently, a man’s brain is set up as compartments, like a waffle. Each box has walls, and men function almost exclusively within those walls. A woman, on the other hand, has a brain like spaghetti, a lot of individual noodles that touch one another. I got to thinking about this comparison in terms of writers and the difference between a plotter, let’s call this writer a waffle brain, and a pantser, you guessed it, a noodle-noggin.

To me, a plotter lives in one compartment at a time, the focus on the action, goals, motivation and conflict. Each box has room for only one issue, and all the boxes march neatly to a conclusion. When a plotter is writing according to the outline they’ve developed, they are like guys. When they are at work, they are only focused on work, in the kitchen creating, that’s it. When a plotter is focused on a turning point, or the set-up, or whatever, their undivided attention is on the single item.

Let me just say, I have a spaghetti brain. Every noodle on the plate intersects in someway. I can switch from one noodle to the next without missing a beat (not quite Lady and the Tramp, but darn close. I’m a romance writer afterall). Every thought and issue in my story is connected to every other issue in some way. The story flows, without following a logical path.

Being a spaghetti brain allows me to multitask like nobody’s business. Whether it’s in the kitchen, where I can fix a meal, talk on the phone, make a shopping list, jot down a story idea and answer questions from the other occupants of my home, or in the worlds that exist in my mind. I can edit one story, leap over to the next to add words to the page, brainstorm a story concept and create promotional artwork within a very short span of time. And here is the most important part: Things don’t fall through the cracks, I keep the facts straight, and the stories move forward in a logical progression. In other words, the sauce sticks to the noodles. And I do all of this without an outline or storyboard or vision map.

The way I see it, there isn’t a wrong way to write a story. You just have to write it in a way that works for you. And I love spaghetti.

Gemma’s favorite desk accessories for many years were a circular wooden token, better known as a ’round tuit,’ and a slip of paper from a fortune cookie proclaiming her a lover of words; some day she’d write a book. All it took was a transfer to the United Kingdom, the lovely English springtime, and a huge dose of homesickness to write her first novel. Once it was completed and sent off with a kiss, even the rejections addressed to ‘Dear Author’ were gratifying.

After returning to America, she spent a number of years as a copywriter, dedicating her skills to making insurance and the agents who sell them sound sexy. Eventually, her full-time job as a writer interfered with her desire to be a writer full-time and she left the world of financial products behind to pursue an avocation as a romance author.

Her gamble paid off when she was a 2012 Finalist in the prestigious Golden Pen contest for Romantic Suspense and she received contracts for her first and second book.

Gemma Brocato is the author of the FIVE SENSES romance series.
COOKING UP LOVE and HEARTS IN HARMONY are available now, with EXPOSED TO PASSION (coming October 2014) available for pre-order 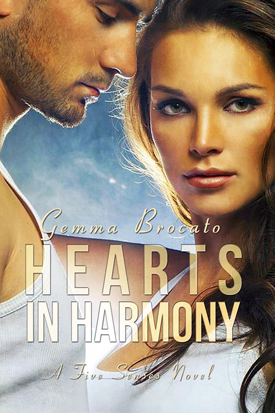 Pippa Sanders’ life is filled with songs of leaving, longing and loneliness. Since the death of her husband, her children have been her world. She’ll do anything to protect them, including encasing her heart in ice until they’re college age. She’s made a practice of shying away from any relationship that could break her heart when it ends. And it’s worked so far.

Clay Mathers has made a temporary move to Granite Pointe, Massachusetts to help with his mother’s Christmas tree farm while she recovers from a stroke. Although his long-range plans don’t include staying in the small town, a little female companionship during his short residency would be welcome. While on duty as sentry against protestors at a military funeral, he finds Pippa visiting her husband’s grave, and begins a campaign to make her into a friend–with benefits.

What starts as a simple affair evolves to something more, something that changes the soundtracks of both their lives…the beating of two hearts in harmony.