In searching a topic for today’s Mythical Monday, I happened upon a strange tale that will certainly strike at the heart of any pet lover.

Many people love to take their dogs for a walk. Whether it’s a turn around the neighborhood, a stroll down a country lane or a jaunt through the park, it’s a relaxing experience for owner and companion. If you have a dog, you may have even meandered across a bridge or two, your best friend trotting happily at your side. The image certainly conjures a quaint picture.

Unless you happen to be walking your pet on the Overtoun Bridge in Scotland.

Tucked into the countryside, near the town of Dumbarton, the Overtoun Bridge is a gothic looking structure that carries a much darker name—the Dog Suicide Bridge. Built in 1895, it soars fifty feet over a placid stream below.

Since the 1960s more than fifty dogs have leapt to their death from the bridge. Making that anomaly even stranger is the fact all of the dogs have jumped from the exact same spot, and each apparent “suicide” has occurred on pleasant, sunny days. All of the dogs involved have been “long-nosed” breeds—collies, labradors and retrievers.  A few, fortunate enough to survive the fall, returned to the top of the bridge and leapt from the same spot again, as if compelled by a supernatural force.

Why this horrifically odd behavior from man’s best friend? Is it possible a dog can suffer depression and commit suicide? Or is the bridge cursed, as some speculate? 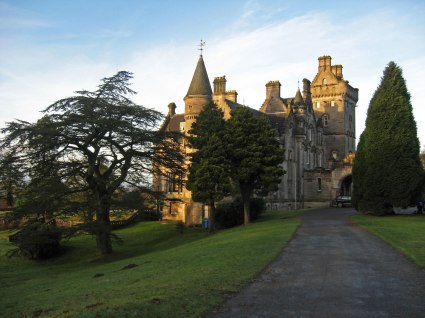 It’s long been believed animals have a keener sense of the spirit world than humans. Perhaps the dogs in question sensed a malevolent presence in Overtoun House, a nearby residence rumored to be haunted. Or perhaps they detected something extraordinary in an area considered a “thin place.” According to legend, Overtoun exists in a region where Heaven and earth are nearly joined.

The most practical explanation to date involves the presence of mink below the bridge. In marking their territory, it’s believed the mink emit a scent powerful enough to lure the dogs to their death. Overcome by the odor, the dogs react instinctively. Blinded by the wall rising beside them, they fail to realize the height from which they plummet.

Why, however, would any animal that survived such a fall, willingly return to the bridge and jump again?

Perhaps the answer will never be known. Thus any dog-owner should be wary when taking their pet for a stroll across Scotland’s Overtoun Bridge. I certainly would!