Before launching into today’s Mythical Monday post, I invite you to visit me at the blog of Kristi Rose where I’m sharing ECLIPSE LAKE and also news of my next two releases. Do hop over if you get a chance. You can find the post here. As for Mythical Monday, today’s topic isn’t about a beastie or mystical place, but a cursed train tucked into Pennsylvania history. As a “Keystoner” I’m always intrigued by legends related to my home state. Thus, I invite you to ride on the hoodoo . . .

Most people are a little freaky about the number thirteen. Even if you’re not superstitious, most are conscious of the ill omens associated with a number tied to bad luck. Given that connection, it’s surprising the Pennsylvania Railroad (PRR) had no qualms about rolling out Engine 1313 in 1888.

Many muttered no good would come of it, but the railroad wasn’t interested in superstition or idle gossip tied to ancient folklore. The engine went on the line with high aspirations, all quickly squelched when the train struck and killed two children during its maiden voyage. The engine was examined, found to be in perfect working order, and placed back on the track. It failed again when the train plunged off a railroad bridge killing twelve people including the train’s fireman and engineer. A month later, it collided with another train, resulting in the derailment of several cars and injuries to numerous passengers. 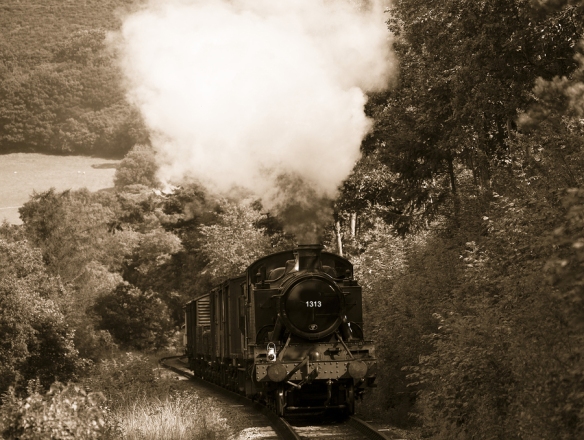 Puzzled, inspectors thoroughly examined the engine but could find nothing wrong. Surely, the catastrophes couldn’t be tied to the assignment of an ill-fated number.

The train was placed back on the track, only to have its boiler blow as it laboriously chugged up a mountain. The train’s fireman was blown out of the car and badly injured. Once again the train was examined and once again, the engine passed inspection. Despite growing grumblings from railroad workers who whispered of bad tidings and ill omens, the train was returned to the line. For several months all went well, and the hoodoo taint of 1313 seemed a thing of the past. Then, when arriving at Manor Station, its brakes failed, causing it to ram another train. The fireman for Engine 1313 was injured in the accident just as many of his predecessors had been.

Officials at PRR pulled the train off the tracks and had their mechanics scour it for defects. Despite all the stories about brake failure, they couldn’t find anything wrong. The train was returned to operation, but it wasn’t long before catastrophe stuck. Engine 1313 failed to stop at a station when the engineer applied the brakes, resulting in the death of three people. PRR’s mechanics took the train to task but found nothing wrong.

Placed on the tracks yet again, 1313 was rolling through Sang Hollow when its oil can suddenly exploded, burning the fireman and engineer. The last straw for most of the workers, they beseeched PRR to pull the train from commission. The company finally complied. Whether or not PRR believed the jinx associated with Engine 1313, it was abundantly clear workers wanted nothing to do with Pennsylvania’s hoodoo train.

Which brings me to my question—how do you feel about the number thirteen?

I readily admit it’s one I don’t like, and I’m highly superstitious about it. By the same token, it’s my street address/house number, which doesn’t bother me at all. What a strange parallel. Could it be because one is mystical and the other mundane and common place? I’d love to hear your thoughts on hoodoo thirteen—and Pennsylvania’s Engine 1313. Please share!