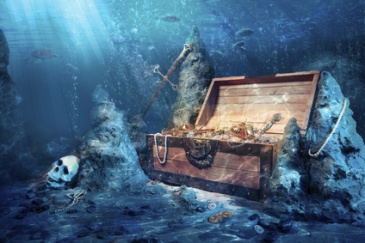 Recently, I was having a discussion with someone about Davy Jones’ Locker. It started as a conversation about 1960s music and the simplistic names of bands like the Beatles, the Byrds, the Doors, the Turtles, and the Monkees. Talking about the Monkees led to Davy Jones, which of course, led to Davy Jones’ Locker. When the person asked if I knew where the name had originated, I realized I didn’t. Naturally, that research had to be the subject of a Mythical Monday post.

I’m sure most everyone is familiar with the term Davy Jones’ Locker as referring to the bottom of the sea, a resting place of sailors and others who have drowned. Davy Jones is an evil spirit who holds dominion over those who perish in his watery domain. He can take various forms and is known to perch in a vessel’s rigging before disaster strikes. But who was the real Davy Jones, the man who inspired the myth?

Apparently, there wasn’t a single individual. A pirate by the same name roamed the Indian ocean in the 1630s, but most scholars feel he wasn’t famous enough to have spurred the legend or sustained such long-lasting fame. The most common belief is that “Davy” is derived from “Duppy” a term for a malevolent spirit in the West Indies. (You can learn more about the Duppy in a Mythical Monday post I shared last August on Island Spirits). Some also believe Davy comes from Saint David, the Patron Saint of Wales, whom many Welsh sailors called upon for protection when they took to sea. 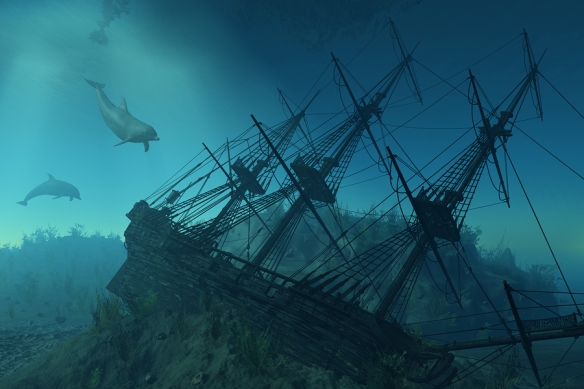 “Jones” is from the biblical prophet, Jonah, who brought ill fortune and storms to the vessel he boarded. The seas calmed only when the sailors threw him overboard and he was swallowed by the great whale God sent to claim him. Many referred to him as “Devil Jonah,” for in fleeing God, he brought calamity to others. To this day, people refer to a “Jonah” as someone who brings bad luck.

Two other general references include Duffer Jones, a myopic sailor who routinely fell overboard and ended up in the drink courtesy of his near-sightedness, and a British pub owner who wasn’t above profiting off drunken sailors. He’d toss them in his locker, then sell them to any captain looking to draft a crew for shipboard service.

As with many old legends, it appears Davy Jones and his Locker are derived from a compilation of myths and historical figures. When it comes to final resting places, I’d much rather frolic on Fiddler’s Green, an Old Salt’s idealized vision of Heaven, than languish at the bottom of the ocean.

For now, I’ll hop over to Pandora and hunt up some Monkees music. It seems only natural I should remember the singer who’s name was the catalyst of this post. 🙂