It’s Monday, and that means it’s time for a bit of myth! Digging around in some old folktales, I found another related to my home state of Pennsylvania. This one comes from Berks County in the eastern half of the state. It relates to a creature so bizarre, it was never even given a proper name other than to be tagged the “yellow-what-is-it.”

Early in October of 1879 in the tiny town of Topton Station, the son of the local prison inspector, a Mr. Schmel, set a hunt in motion with his tale of an unidentified monster.  On a brisk fall day, he raced into the local motel and breathlessly told his story to the hotel’s owner, Mr. Hinnershitz. 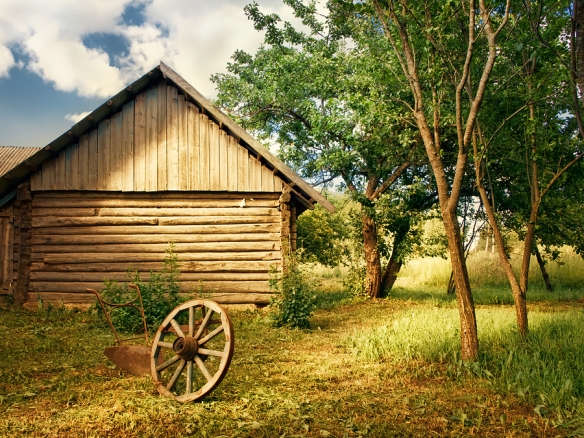 Schmel was backed up by his friend, Jared Rissmiller. Together, the two men had been herding cattle when they spied a yellow creature in an open field just outside of town. According to Schmel it was about four feet tall with long arms, and two fingers on each arm resembling claws. No mention of hands, but its feet were said to be flattened lumps without toes. Its head was furrowed, its body smooth. The creature was male, naked, and covered in dirt or clay. When spotted, it ran toward Schmel as if to grab him, then abruptly changed its mind and fled into a cornfield.

Shaken but fueled by adrenalin, the two friends quickly secured the cattle and set off in search of the beast. Not long afterward they found the creature curled into a ball on the opposite side of the cornfield.

This image conjures such a pitiful picture in my head, it makes me think the “monster” was more frightened of them than vice-versa. It isn’t specified, but I’m sure the men made a fearful sight, probably armed with rifles, pitchforks or clubs. When it realized it was discovered, the poor beast leapt to its feet and stood blinking at them. Perhaps it was confused or too terrified to move. Whatever the delay, it allowed Rissmiller a closer look.

“It was yellowish brown in color with no hair, small eyes and face, arms about fourteen inches long, legs somewhat longer, the hands and feet resembling those of a human being.” Rissmiller also said it had two horns on top of its head. He and Schmel tried to capture the beast but it was able to escape, scurring into the woods beyond a fencerow.

Several days later the yellow-what-is-it was spied by another resident. Mr. Heckman supported the description given by Shcmel and Rissmiller but thought the creature might be an escaped gorilla.

Hmmm . . .clearly, Mr. Heckman hadn’t encountered many gorillas in his day, because:  one, the description wasn’t even a distant match and two, there was no news of an escaped gorilla anywhere in the vicinity.

That didn’t prevent the local residents from taking action,however. Fired up by the thought of a creature haunting the countryside, they diligently combed the area. In the days that followed, reports filtered in of odd footprints discovered around town, strange tracks in plowed fields, and bizarre cries echoing from the woods at night. Some townspeople whispered their fear of being followed when their path led them on darkened roads after twilight. The growing terror eventually prompted armed patrols. Men with rifles began traversing the area at night, accompanied by dogs.

Yet despite all these efforts, the yellow-what-is-it, was never captured or seen again. The unidentified creature remains a mystery tucked into the annals of Pennsylvania’s dusty folklore. Perhaps, realizing it was no longer safe, it moved to another area. Or perhaps it was ill and eventually perished. There are no accounts of the beast actually harming anyone, despite all the hysteria it generated. For that reason, part of me can’t help but feel sympathetic toward it. What do you think?