Top ‘o the morning to ye and Happy St. Patrick’s Day! Although I ran this post last year, I thought it worth re-sharing on this splendid day marking the wearin’ of the green.  Last year St. Patrick’s Day didn’t fall on a Mythical Monday. This year, I couldn’t pass up the opportunity when the date coincided so perfectly (maybe the wee folk had something to do with it)! So enjoy a virtual green beer on me while I trot out a much beloved figure from myth. 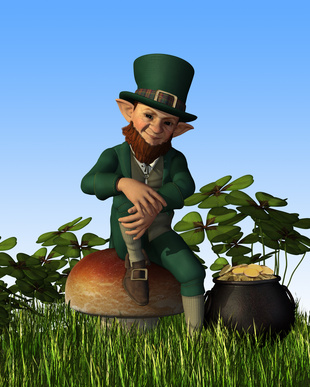 Remember when you were a kid, and you wanted to catch a leprechaun? If you were like me, it had nothing to do with that legendary pot of gold. What was gold to a kid? The allure was the idea of a magical wee creature who could move between worlds. Spying a leprechaun meant maybe, just maybe, the veil between everyday reality and a hidden otherworld grew thin enough to cross over. What child wouldn’t want to explore a fairytale realm where enchantment was king?

Shoemakers by trade, Leprechauns were mostly solitary, but they enjoyed a good reel with the fiddle and tin whistles at night. Kindred to the Fair Folk, they were descended from the great Tuatha Dé Danann, and squirreled their gold away in buried pots. If you were crafty enough to catch a leprechaun and kept your eye fixed on him, he’d have to reveal the location of his gold when asked. One blink, however, and he quickly vanished from sight.

When I was a kid, there was a huge open field across the street from my house. It backed up to the rear yards of the homes on that side, and stretched the full length of the neighborhood. It was a magical place fully of whimsy. I didn’t realize it at the time, but it was an enchanted realm all its own. There were walnut trees and wild flowers, clusters of honeysuckle and patches of sun-sweetened strawberries. When dusk settled, my friends and I gathered to watch bats launch from the tops of snarled dark trees. In the winter, we donned skates and glided on frozen ground water beneath a full moon. Autumn was perfect for gathering acorns and trekking to the “big hill” that sprouted from the earth like a mythical fairy mound. 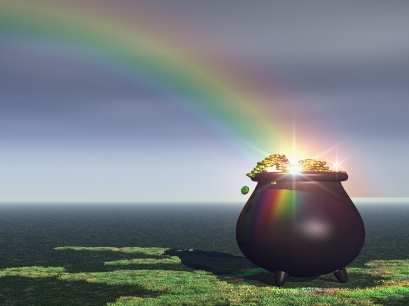 I never did find a leprechaun in that magical kingdom, not that I ever put any great energy into the search. I preferred to imagine one of the wee folk watching from beneath a shaded leaf or a plump toadstool. The problem with magic is that when you leash it, the enchantment fades. Perhaps that is why leprechauns and pots of gold only exist at the end of rainbows for rainbows have no end.

I don’t have a drop of Irish blood in my veins – – I’m Italian and German with a smidgen of Brit mixed in – – but I think all of us feel a connection to the Emerald Isle, especially during the month of March. So whether you’re Irish or just honorary for the day like me, here’s hoping your day is filled with rainbows and the blessings of the wee folk.

Was there a magical place you remember from childhood? Do you have any special St. Patrick’s Day traditions?