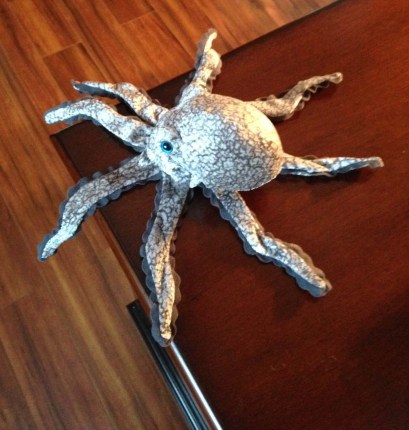 He showed up on my doorstep several years ago when I was working on a short story involving a hagfish.

If you’re not sure what a hagfish is, think of a fat, eel-like creature capable of producing massive amounts of slime.

Sound cuddly? And my story wasn’t about just any garden variety hagfish, but a colossal mutant with a fondness for underwater submersibles. Um, did I mention I didn’t always write romance? 😀

A friend of mine sent Opie along as inspiration. Granted he’s more octopus than hagfish (who really wants a pet that engulfs its victims in slime before devouring them), but  I was instantly smitten. Seriously, who could resist those turquoise blue eyes and floppy tentacles? And that bulbous head was just meant for repeated patting.

Opie immediately commandeered a corner of my desk and has clung there tenaciously. Since I no longer have a cat to keep me company, Opie has become the critter who dominates my work area when I’m writing.

But it wasn’t always that way.

My cats each had a favorite means of making their presence known when I was in a creative zone. Any good feline worth a disdainful tail twitch knows that’s the opportune time to demand attention. Feeding time, cuddling time, play time, whatever. Cats have an innate strategy gene and know how to employ it. 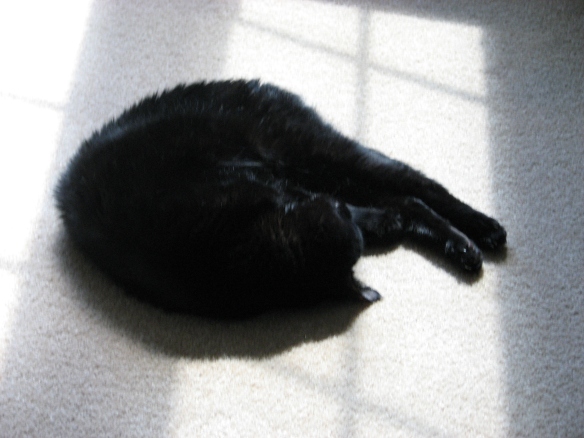 Onyx sunbathing. He was such a good cat…they all were!

McDoogal liked to curl up on my lap, which was actually nice until my legs started falling asleep. Onyx preferred strolling across the keyboard and posing in front of the screen. But Arafel…leave it to a female to be the queen of distraction. Her tactic involved sitting beside my chair and meowing. At least that’s how it started, but eventually those soft plaintive meows transitioned into a caterwaul it was impossible to ignore. In a test of wills, Arafel always won.

Opie is far less intrusive but I know he’s there. Watching, encouraging, inspiring. And yes, distracting, when I get caught up in his excess of cuteness. 😀

How about you? Do you have a pet who demands attention when you’re working or a desk mascot that inspires you?

19 thoughts on “Writing, Cats, and a Friendly Octopus by Mae Clair”