I’m digging deep into my memory for today’s Mythical Monday post. I’ve read multiple books in which the Wild Hunt factors into the plot, but can’t come up with a single title off the top of my head. Frustrating.

I’m sure I devoured most of them in the days when fantasy novels were my go-to genre. I remember several scenes vividly. Although I don’t read nearly as many fantasy tales as I once did, I still love a good supernatural/sorcerous novel, along with all of the eerie and ethereal beings that haunt the pages.

I’ve read stories with dragons and necromancers, dark faerie races and repulsive monsters. Ogres, doppelgangers and slithering beasts. Perhaps none is more frightening than the Wild Hunt – a band of ghostly phantoms on spectral steeds. They can be seen racing across a night-blackened sky or hovering just above the ground, a macabre host surrounded by undead hounds. The chilling sound of the Hunt’s horn echoes through lonely meadows and moon-splattered woods, striking fear into the hearts of all who hear it.

Myths of the Wild Hunt can be traced to Scandinavian and Germanic myth; later to Northern European countries. An omen of ill fortune, the Hunt foretells of looming catastrophe, often of plague or war, most certainly death.

Fortunately it is limited to specific times, beginning on October 31st and ending on April 30th, (Beltane Eve), of the following year. The height of the Hunt’s activity comes during the midwinter festival of Yule (December 21st). On that cold wintery night, travelers would do well to stay indoors, gathered close to the hearth where it is safe and warm. 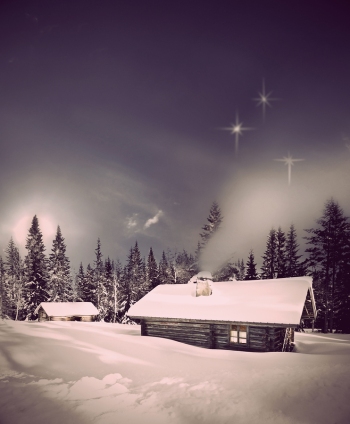 In Norway peasants superstitiously left a measure of grain outside between Yule and Twelfth Night to feed the Huntsman’s horse in hopes he would pass them by. If caught in the path of the hunt, travelers knew to fall face down in the middle of the road. If fortunate, they would feel nothing but the icy paws of the hounds passing over their back. Legend says the Huntsman will graciously spare those in the middle of the path, but woe to he who attempts to track the hunt. That ill-fated soul will find himself a captive in the land of the dead.

In many tales, the Norse god Odin is the leader of the Hunt, riding astride his eight-legged steed, Sleipnir. The Saxon version defines Herne the Hunter as leader, and in many legends, King Arthur is one of the huntsmen.

When I think of the Hunt I always envision its wintry existence. Perhaps it is nothing more than the chilling specter of something supernatural blending with the innate cold of winter. The two twine effortlessly, conjuring striking images of silver moonlight, snow and phantom horses in my mind.

Winter will soon be officially upon us with the arrival of Yule on December 21st – the shortest day of the year. I love this month, a truly magical time, culminated by the arrival of Christmas Day. Even as I celebrate that joyous occasion I can’t help but be intrigued by the folklore of the past.

By the same token, I prefer to imitate those lodgers who huddled around their hearths on cold wintry nights, safe and secure in the warmth of their homes. As fascinating as the Wild Hunt is I prefer my December nights full of Christmas cheer, good Yule tidings and merriment.

23 thoughts on “Mythical Monday: The Wild Hunt by Mae Clair”