Last week for Mythical Monday, I focused on the dark faerie race of Southern Wales, the Benedith Y Mamau, who most everyone would agree are horribly wretched creatures. This week I’m realigning my mythical microscope to Southern Africa and a shy race of people known as the Atbatwa. 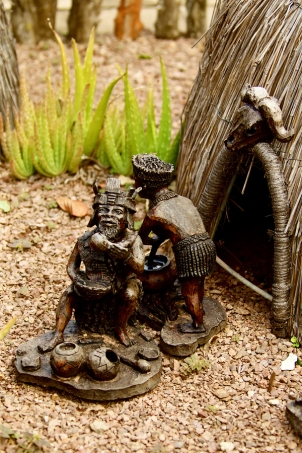 Atbatwa are identical to Zulu tribesman but stand only one-half inch tall. Their homes are crafted from anthills, the interior chambers twining deep into the bowels of the earth. Skilled workers, they have successfully domesticated ants and rely on them for labor and mobility much as humans do horses. Atbatwa hunting parties ride ants when embarking on a quest for game, always seeking out prey much larger than they are.

How can a miniscule race of people bring down an animal so big? Their arrows are tipped with a lethal poison, certain to bring instant death.

By nature, Atbatwa are elusive and shy, rarely ever seen by human kind. If they do allow themselves to be glimpsed, it is usually only by pregnant women, children under four years of age and old wizards. A woman in her seventh month of pregnancy who spies an Atbatwa male, knows she will give birth to a baby boy.

Though Atbatwa are not aggressive by nature, they will take offense if an unwitting human comes upon them in the grass. Should this happen, the Atbatwa will pose a single query: “From where did you first see me?”

The traveler must be clever with his response for his life depends on it: “From the mountain far off in the distance.” Or… “From many miles out at sea.” Anything to convince the Atbatwa, who are sensitive about their size, that their stature is so imposing they are easily spied from many miles away. Answer incorrectly and blurt that you only just stumbled upon the Atbatwa, and your demise will follow courtesy of a poisoned arrow.

This gives new meaning to “watch where you walk,” and “avoid stepping into trouble.” 🙂

It’s amazing how many mythical races of beings exist in folklore, each native culture claiming legends of their own. Is this the first time you’ve “met” the Atbatwa?

18 thoughts on “Mythical Monday: The Diminutive Atbatwa by Mae Clair”