October is the perfect month to get wrapped up in a paranormal romance! Today, I’m presenting The Howling Heart, by April Bostic to tickle your love of all things spooky and romantic. 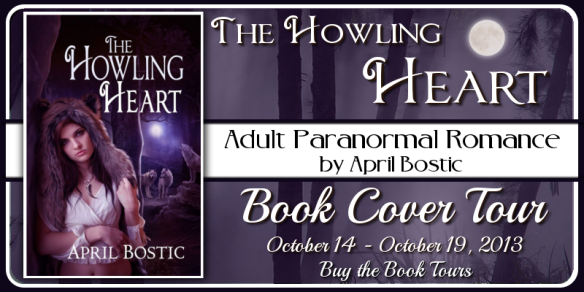 BLURB:
Paige Donovan is an ambitious college graduate who aspires to reach the top of the corporate ladder. She’s climbing fast when given the promotion of a lifetime at a prestigious fashion magazine in New York City. Her bright future comes to an unexpected halt after news of her father’s death. She inherits his old cabin in the Colorado Rockies, and just when she thinks her luck couldn’t get any worse, she has a car accident in the mountains and awakens in the small, remote community of Black River.

Soon, she’s engulfed in the mystical world of Varulv—wolves descended from 13th century Scandinavia and blessed by Norse gods with the ability to appear human. Paige is desperate to return home, but never expects to fall for her rescuer, Riley Gray, a charming young werewolf from England who offers her an alternate future with his pack.

EXCERPT:
I wasn’t expecting us to have this type of conversation so soon, but there we were, sitting on the riverbank while discussing Varulv sex. He didn’t seem embarrassed to talk about it, and I was getting more curious.

“Have you ever made love to a human?” I asked timidly. My ears felt hot, and I looked at him through shy eyes. I hoped I wasn’t overstepping the boundary of personal information.

He answered quietly. “No.”

His revelation came as a surprise, but I was still curious. “What about a wolf?” I don’t know why I asked. I knew there was no possible way this extremely attractive man was a virgin.

He hesitated this time. Seconds ticked by before he replied, “Pack law states we can only make love after we claim a mate and the leader recognizes our union.”

His indirect answer caught me off-guard, and I couldn’t keep the sarcasm from my words. “You’re not one to follow the rules, so I’ll take that as a yes.”

I looked away and lifted my feet out of the water. With my legs bent, I pressed my knees against my chest and wrapped my arms around them. I thought the conversation was over, but Riley was determined to have my attention. His fingers grasped my chin to turn my head toward him.

“That’s probably the only law I haven’t broken.”

Our gazes locked, and he almost stole my breath, again. “Why? I know abstinence can’t be easy for you.”

His voice was almost a whisper. “Not anymore.”

I noticed his green irises had flecks of amber in them—the same color as his wolf eyes. That’s when I realized our heads had moved closer.

Riley’s warm breath caressed my face, and it smelled of hickory and clove. “I’m not interested in any she-wolves in the pack.”

ABOUT THE AUTHOR:
April Bostic is a New Jersey-based, Adult Romance author who enjoys unleashing her creativity and letting her imagination run wild. Her love of romance books inspired her to become not just a reader, but also a writer. In December 2008, she self-published her first novel, a contemporary romance with a supernatural twist entitled “A Rose to the Fallen.”

Her first short story, “Right Here, Right Now,” released in January 2012, is an erotic romance with a dash of S&M. The following year, she released two more short stories: a romantic urban fantasy inspired by the Greek myth of Eros and Psyche entitled “Eros, My Love,” and a sexy romantic comedy entitled “Love Addiction.”After five years, she released her second novel, “The Howling Heart” in August 2013, a paranormal romance that delves into the mystical world of werewolves and Norse gods. To end her busiest year in publishing, April will release her fourth and final short story in December 2013, a historical vampire romance entitled “A Dark Scandal.”

Connect with April at the following haunts:
Website
Goodreads

The Howling Heart is available for purchase from:
Amazon
Barnes and Noble
iTunes

5 thoughts on “The Howling Heart by April Bostic #ParaRomance #BuytheBook”