It’s Mythical Monday, and as you read this post I’m relaxing on a nice beach on the eastern seaboard (don’t worry, I’ll be checking in later). There’s nothing mythical about that, just a long over due vacation and highly anticipated. 🙂

Since I’m officially in vacation mode, I’m recycling an old post from June of 2012 that only three people saw. It was before I started Mythical Monday, but it definitely falls into the category. Take a look:

If you scroll down the sidebar of my blog you’ll see “Twelve Facts About Me.”  Check out #3, “I saw a UFO when I was six.” No eye-rolling please! 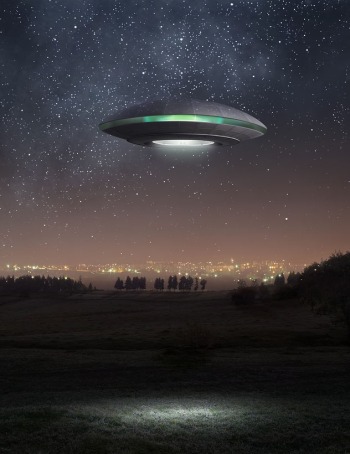 It was a warm summer evening with twilight in full bloom. My father and I relaxed on the front porch together, watching as the evening ebbed to the darker shades of night. He and I often relaxed there, especially if there was a thunderstorm brewing.  My memory of that evening is spotty, but some moments are crystal clear forever cemented in my mind.

My father fell asleep, probably tired after a hard day of work. Shortly afterward, something large and green trolled across the sky. I remember it as a semi-cloud, the color of algae-rich seawater. Light spilled from the bottom drenching the street, front lawn, and half the porch in an eerie green glow. The light swept over me in a brackish halo, but didn’t touch my father who remained tucked in the shadows.

I don’t know why I didn’t wake him. When you’re a kid you tend to accept the unusual. The ‘cloud’ moved past, and soon people were walking up the street, jabbering excitedly. My dad woke up and I followed him down to the sidewalk where a woman stopped to chat. She told my father “the sky looked like it had a tail.”  I remember those words vividly.

Had I seen a UFO?

Earlier this year while reading The Mothman Prophecies by John Keel, I found a few paragraphs referencing the area in which I live, and how the “skies were busy” with UFOs. Amazing, because that was decades ago! I was a kid, and this was confirmation I’d seen something! There was even a reference to someone observing “the sky had a tail.”

I’m still kicking myself because I thought I had highlighted that section and can’t find it now, but I remember excitedly pointing it out to my husband just three months ago.

What exactly had I seen? A hot air balloon?  Some freak weather anomaly?

As an adult I can’t reference anything even slightly similar. Given the woman on the sidewalk confirmed something odd has happened that night, it will forever live as a goose-bump memory in my mind.

Have you ever seen something you thought was a UFO? Would you want to? I’d love to hear your thoughts!

25 thoughts on “Mythical Monday: When the Sky Had a Tail by Mae Clair”