Happy Labor Day, everyone! It’s a holiday and the three day weekend has me feeling lazy.

I cheated with today’s Mythical Monday because I originally ran this post on June 6, 2012, before I’d begun my weekly feature. Since only four people saw it (and it was a Wednesday), I figure I’m safe in posting it again. 🙂 I hope you enjoy!

There’s one in every neighborhood. When I was six, the spooky house was two doors down, part of the urban tree-lined street where my family made their home. A brooding three-story structure of gray stone with a sprawling covered front porch, white columns, and side bump-outs, it oozed mystery. The adults might have been oblivious, but all the neighborhood kids knew it was haunted.

No one actually lived there. It had been converted for business offices with a huge parking lot in the rear that butted against an alley. The lot was sectioned off with lengths of heavy chain strung between squat cement pilings. We’d see people come and go, swallowed up inside, but there were never many cars in the lot, Naturally, we were suspicious.

My friends and I were convinced a coven of witches met there, and that if you ventured too close to the sides where the shadows were thickest, you’d be sucked up into a coffin tucked beneath the eaves. No one would ever know what happened to you because an evil twin, capable of fooling everyone, took your place. 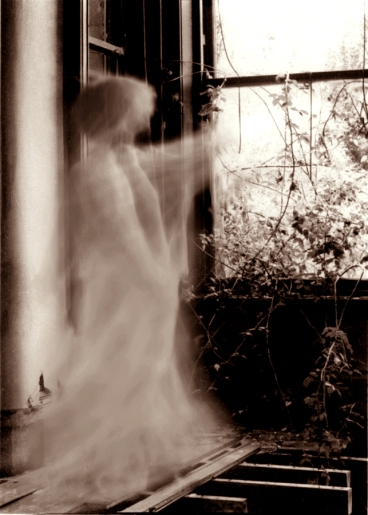 The house also had a resident ghost who lived on the second floor. We knew this because the south facing room had a trio of beautiful stained glass windows and that was the perfect place for a ghost to languish.  Our phantom was female. She was a melancholy soul who’d been separated from her true love and imprisoned by the witches because they were jealous. She spent her time listening to an old-fashioned music box, weeping for her lost love, and looking romantically tragic in a flowing white dress. It’s amazing what six-year-olds can envision, especially when inspired by Dark Shadows and Quentin Collins!

Once when we were swinging on the metal chains in the parking lot (kids do dumb things when adults aren’t around), one of the neighborhood boys fell and cracked his head on the asphalt. It was a traumatic experience with a lot of screaming, crying and blood splatter. I remember following the trail of blood down the alley and across a connecting street to his house a day later. The evidence stayed there a long time before the rain washed away the grisly reminder.  Although Chester recovered, we were sure the witches had caused his fall, angry that we’d discovered their secrets. I don’t think he ever swung on the chains again. I’m not sure I did either.

Not long after that, my family moved to the suburbs where I made new friends and found a new house to invent stories about. Why is it that old homes twine so ideally with the paranormal?

What about you?  Was there a spooky house in your neighborhood that still resonates in your memory? I’d love to hear about it!

16 thoughts on “Mythical Monday: The Spooky House by Mae Clair”