I love reading in multiple genres. Right now I’m engrossed in book three of a fantasy trilogy. Prior to that I was mired in romance – – everything from contemporary to paranormal. I also love reading thrillers, mysteries, YA novels and even horror. That’s why when I heard about Mark Knight’s new release, I had to take part in promoting it!

BLURB:
Until the age of seventeen, Daniel Dark had no idea of his true origins. Something was ulcerating deep inside him, waiting to claw its way free. Pastor Nathan Dark and his wife, Annie, had adopted him and brought him up as their own. But Daniel always felt that there was a secret they feared tell him…

Everything changes the day a mysterious package arrives at his home. It contains blood – human blood. Daniel’s vampire half awakens and takes its first step out of the shadows. The once lazy, goalless youth transforms into sharp-sensed killer. Now, there is no turning back.

Many horrors await Daniel, for he not only can detect but also attract the living dead…

Daniel Dark will unlock the sinister netherworld where helpless humans are kept and bred for bloodletting, and where he will have to face the unutterable evil.

EXCERPT:
Daniel loved Sunday mornings. The folks had gone to Sunday Service of course, leaving Daniel with the entire house to himself.

Mom and Dad had given up trying to keep their son going to church. He hated the place, and made no bones about it. Considering all that his Dad had put him through in that building – the chanting, the laying on of hands, the constricting straps – they really couldn’t protest too much. So, they went to the church and Nathan gave his sermon and Annie helped with the communion, while Daniel sat in the living room at home blitzing out on a slew of Jackie Chan DVDs and cramming down junk food. Bliss.

After the Sunday roast (which even now was sizzling in its own juices in the oven, sending mouth-watering aromas into the living room) Daniel would have a catnap in his room, and then would get ready for an evening out with his cronies. He still hadn’t phoned his girl to see if she wanted to come. Maybe I should just hang loose for a while, he pondered. Daelin can call me for a change.

Impatience would win. Daniel would make the call.

The doorbell rang. Hoisting himself up from the couch, he ambled over to the front door, surprised that there was a caller on a Sunday morning.

Shit, he thought, I’m just in boxers! He shrugged inwardly. Whatever. They’ll have to take me as I am.

He got a fleeting glimpse of the caller through the slim stained glass window that bisected the door. If he had looked a few seconds longer he might have thought twice about opening up at all – but he’d already turned the handle and was swinging the door wide open.

What stood there before him was a courier holding a parcel. Then – no courier, just the parcel on the doorstep.

The parcel was not large, perhaps the length of a loaf of bread, and wrapped in plain brown paper, tied off with string. He picked it up.

Oddly, there was no return address. No postmark. The handwriting of his name and address looked ordinary enough, however. Taking one last look left and right to see if he could see who had left it, he took the mysterious package inside and closed the door against the cold.

The package, by strange contrast, was warm. It was making his palms tingle, as though thousands of miniscule, electrified worms were eating their way out of the package and into his skin. It’s a bomb, he thought, only ninety-seven percent seriously. A bomb left by that creepy old pastor. Well, if it is, I’ll come back and haunt the fuck out of him.

He could have opened it right there but instead took it up the stairs into his room, closing the door after him. Usually, this is what he would do if his parents were home and he wanted to be alone (which was most of the time). Something about this package was telling him that it was not just specifically but uniquely for him, and where better to view its contents than that most sacred of realms – his bedroom.

Standing in the center of the room amid the debris of corn snacks, car mags, and yesterday’s clothes, Daniel allowed himself a long moment to wonder just who could have sent him this thing. It was nowhere near his birthday. His relatives were not about to send him a gift without a reason. Could it be Daelin? Nope – wasn’t her style. She had the role of gift-getter down pat, and Daniel could see no reason why that would have changed.

For a long moment he stared at the package. Feeling a chill, he quickly pulled on a tee shirt and jeans. He took a deep breath. Ok – I’m going for it.

The brown paper tore easily. The parcel wasn’t crumpled at all – in fact, it barely seemed that it had even been handled. Still there was that strange warmth, that weird prickling…

Finally, the last shred of paper fell to the floor. What Daniel Dark held in his hands immediately induced strange sensations. Wonder. Confusion. Dread.  It was a glass sphere, like a crystal ball. Black-red in color. Upon its surface was an embossed symbol, a kind of a trident.

For glass, it was remarkably warm. It was then he realized that the orb was not made of red glass; the redness was coming from what it encased within. His hands were tingling even more than before. There was a hissing sound…

The heat from his hands was eating into the material of the sphere. Daniel watched, open mouthed, as the outlines of each of his hands sunk slowly into the glass as though melting their way through it. An electrified glow traced his fingers as the orb continued to distort, until… 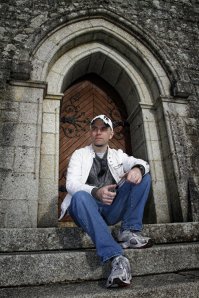 About the Author:
Mark Knight grew up in Massachusetts, USA. Settling in the UK, Mark continued to write novels of differing genres, including horror and television scripts. Mark has scripted two horror scripts for Hollywood’s Little Slices of Death production company and one for Illusion Studios. He also won several short story competitions, and has had his work featured in published anthologies. Mark concentrates now on Young Adult urban fantasy novels.