It’s Thursday, still dreary and bleak in my neck of the woods, but it feels like Christmas and spring rolled into one! A lot of things have come together in the last few days that I’m anxious to share!

First, I leaned my video trailer for WEATHERING ROCK has been entered into the monthly contest at You Gotta Read Reviews. I’m #6, and the vid went up yesterday. Voting will occur between March 21 and March 26. This was my first attempt at a video trailer and I’m up against some stiff competition with sleek designs, so I’m not expecting miracles but it’s nice to be included. And don’t worry—when it’s time to vote, I’ll provide a shout out reminder to anyone who would like to vote for WEATHERING ROCK. 🙂

Now, about the title of my blog post. 😀 Tuesday night, after a fun evening out with ‘the girls’ I came home to find the cover art for TWELFTH SUN waiting in my inbox. Talk about a great cap to a wonderful night! If you haven’t already heard me screaming about it, TWELFTH SUN is my new contemporary romance/mystery set to release in August.

I’m in love with the cover! The very talented Renee Rocco, publisher of Lyrical Press, Inc. did the design for me. It features my hunky young PhD, sunset colors, and the beautiful feel of a beach coastline. Check it out: 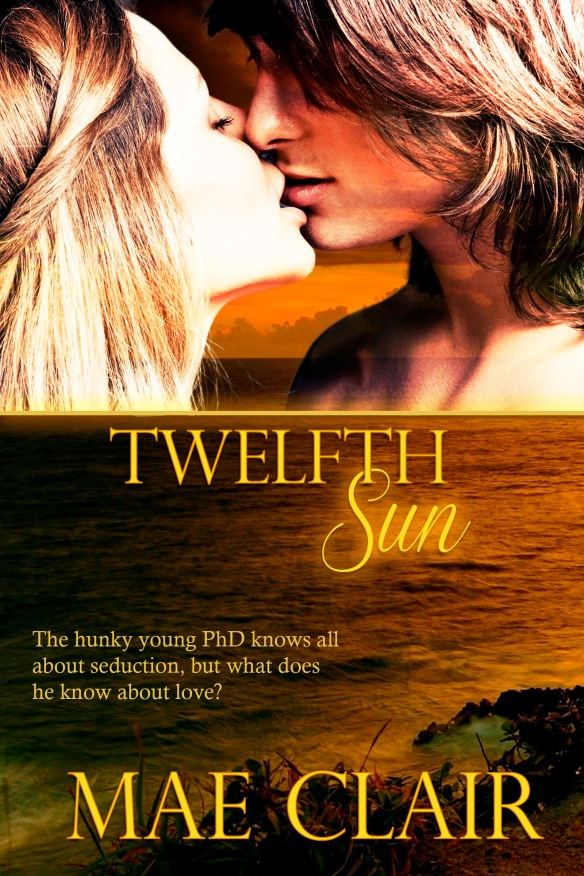 Nice, huh?  And not only did the cover arrive, but so did my tag and blurb. I was pleased the publisher chose to use a lot of what I had suggested for the blurb, but it’s been fluffed and enhanced:

BLURB:
The hunky young PhD knows all about seduction, but what does he know about love?

Reagan Cassidy is settled in her life. She has a thriving interior design firm, an upscale condo, two cats, and a goldfish. As a favor to her uncle, she agrees to team up with his marine archeologist friend to validate and retrieve a nineteenth-century journal, reputedly that of a passenger aboard the doomed schooner Twelfth Sun. Finding a hunky twenty-five-year-old coming out of the shower in her hotel room wasn’t part of the deal, but it’s hard to complain…

Dr. Elijah Cross is cocky and he knows it. He enjoys trading barbs with the lovely Reagan. Barbs, and some innuendo. He can tell she’d rather get back home to her business than stick around for the extended treasure hunt they’ve been talked into, but he’s fine with the situation. At least, until the “clues” start getting personal.

Reagan finds Dr. Gorgeous is as skilled in matters of the heart as he is behind the lectern. Throw in a series of clues which mean more to Elijah than he’ll explain, several odd-ball competitors out to win the journal, a saboteur, and a lavish seaside mansion, and Reagan has enough trouble keeping her head straight, let alone her heart.

Now all I have to do is wait for August to roll around! Having the cover and blurb has ratcheted up my excitement level.

Is it August yet? LOL!

I really love these characters and hope you will too. Yes, I know writers say that about all their books, but this one was a lot of fun to write!

Thanks for sharing my cover reveal with me 😀