Looking for a breezy fun read? Check out the debut release, CRAZY IN PARADISE, from author Deborah Brown!

BLURB:
Dying in the middle of the summer in the Florida Keys is sweaty business.

Welcome to Tarpon Cove.  Madison Westin has inherited her aunt’s  beachfront motel in the Florida Keys.  Trouble is she’s also inherited a  slew of colorful tenant’s – drunks, ex-cons, and fugitives.

Only one problem:  First, she has to wrestle control from a conniving  lawyer and shady motel manager.  With the help of her new best friend,  whose motto is never leave home without your Glock, they dive into a  world of blackmail, murder, and drugs.

EXCERPT:
I tried to speak to Dickie about the arrangements when I first arrived  in town. He told me firmly that he only took instructions from Tucker  Davis and he wasn’t allowed to discuss any of the final details. I  wondered why the secrecy, but he was so nervous I didn’t ask any more  questions. He told me not to worry; he had worked hard to make  everything memorable.

I appealed to him, “Don’t family members usually participate in the planning?”

But he was very clear; Tucker Davis’ approval was the most important thing to him.

I took a deep breath. Later, our family would create a lasting tribute  to Elizabeth showing how much we had loved and respected her, and how we  would deeply miss her. But for now, this would have to do, I guess.

I glanced up and saw a man who looked to be in his 60’s walking to the  podium. He was well-worn, beer-gutted with dirty looking grey hair, and  dressed in jean shorts and a tropical shirt that looked as though he’d  worn them for several days.

“Hey, everyone,” he said into the microphone. “My name is…” he paused,  “well, all my friends call me Quattro.” He held up both of his hands in a  two-handed friendly wave.

He was missing his middle finger on his right hand and his thumb on his  left hand. Brad and I glanced at one another and laughed. I mouthed  “Quattro” at him and waved four fingers. He turned away, biting his lip.

“I told Dickie I’d speak first because he worried no one would come up  and say anything and it wouldn’t look right. I told him don’t worry so  much.” Quattro slowly scanned the crowd. “I reassured him there were a  few people here who could think of something nice to say.” He ran his  fingers through his hair and scratched his scalp.

“Elizabeth was a great old broad. Too damn bad, she died so young. She  seemed young to me. Hell, I’m only a few years younger. You know she  checked out in her sleep, and in her own bed. How much better does it  get than that?”

I looked around. A few people were nodding their heads in agreement.

“Now that she’s kicked the bucket…” He paused. “Well, everyone knows  there’s no bucket involved.” He laughed at his own humor. “Have you ever  wondered what the reward is?” He waited as though he expected an  answer. “Hmm, I’ve no idea either. Damn, it’s hot in here. You’d think a  funeral place would turn on the air conditioning.”

“Yeah, I’ve got sweat in my shorts,” I heard someone say. A few others voiced their agreement.

“Keeps the smell down and all,” Quattro continued. “I know when it was a  drive-thru the air worked good and sometimes the place was downright  freezing.”

I saw a few people sniffing at the air. Were they sad? Or were they disappointed they couldn’t smell hotdogs and fries?

Dickie Vanderbilt stood off to the side, staring at his shoes, and  picking at his rather large tie tack in the shape of a flamingo.

“But back to Elizabeth. I called her Betty once and, boy, she got mad.”

Mother sobbed loudly, which I knew was actually laughter. People turned to stare.

I wrapped my arm around her shoulder and pulled her close. “Mother, please. This funeral is bad enough.”

Her body shook with laughter. I gripped her tightly. “Oww,” she whispered.

“Behave yourself, or I’ll keep squeezing.” I shifted again on the bench,  having a hard time sitting still when my legs kept sticking to the  wood.

“Elizabeth was good to a lot of people,” Quattro continued. “Too bad she  won’t be around to do any of us any more favors.” He looked around and  rubbed the end of his nose.

I stared wide-eyed at him wondering if he was about to pick his nose.

“The truth is, I’ve run out of stuff to say. I know she wouldn’t have  wanted to die so soon, but the problem is we all think we’re going to  live forever, and we don’t. So, ‘God Bless’.” He waved and walked away  from the podium. 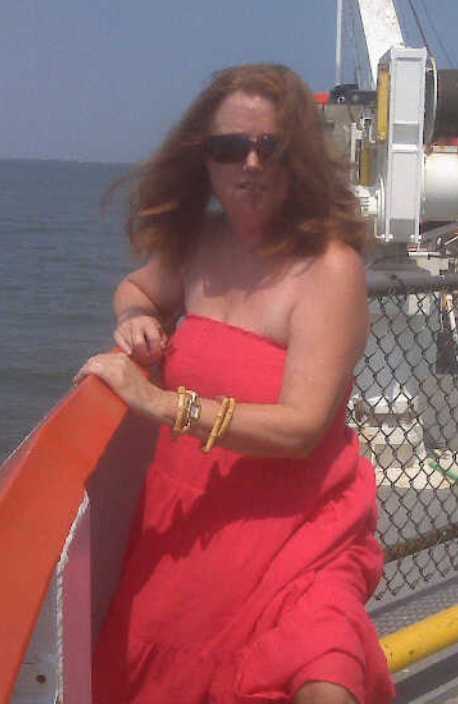 AUTHOR BIO FROM DEBORAH BROWN:
Crazy in Paradise, is my debut novel, a Florida Keys mystery, which makes the reader laugh, cry and cheer…

My personal ad would read:

Since all great journeys start with a single step, I’ll have on a cute pair of shoes.

Crazy.  Ice cream loving.  Redhead.  5’2″, long legs.  As an avid  exerciser, I get to the gym every five years or so.  I hate being  tricked by that stinking raisin in the oatmeal cookie when my heart was  set on chocolate.  And it’s totally acceptable for me to be mildly  annoying when it makes me laugh.  South Florida is my home, with my  ungrateful rescue animals, where Mother Nature takes out her bad  attitude in the form of hurricanes.