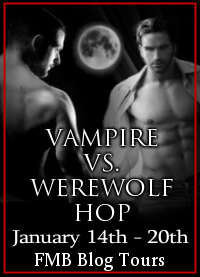 Today is Mythical Monday on my blog, and also the first day of the Vampire vs. Werewolf Hop. What a great mesh! During the hop, participating authors and bloggers will be discussing those sexy creatures of the night and giving away prizes. You can find a complete list of participating authors here.

As someone who enjoys a good paranormal romance, I readily admit a fondness for both night prowlers. Do I have a preference? Hmm …there are plenty of sensual, smoldering vamps out there but, if I had to choose, I’m definitely partial to the guys with a lunar attachment.

It started many decades ago with my older sisters watching a show called Dark Shadows. I was the annoying grade school kid but, even at six, was enraptured. Sure, the star of the show was vampire Barnabas Collins, but I was infatuated with Quentin Collins, tortured smoldering werewolf. A connection was born.

Today, many stories favor shifters and wolf packs which I do enjoy. But, to me, there is nothing more tragically romantic than the original werewolf legend in which lycanthropy was a curse. I love the idea of a single individual struggling against the power of something he or she can’t control. That was the concept I used when writing WEATHERING ROCK, my time travel/paranormal romance about a Civil War colonel transported to modern times. Let me share the blurb:

Drawn together across centuries, will their love be strong enough to defeat an ancient curse?

Colonel Caleb DeCardian was fighting America’s Civil War on the side of the Union when a freak shower of ball lightning transported him to the present, along with rival and former friend, Seth Reilly. Adapting to the 21st century is hard enough for the colonel, but he also has to find Seth, who cursed him to life as a werewolf. The last thing on Caleb’s mind is romance. Then fetching Arianna Hart nearly runs him down with her car. He can’t deny his attraction to the outspoken schoolteacher, but knows he should forget her.

Arianna finds Caleb bewildering, yet intriguing: courtly manners, smoldering sensuality and eyes that glow silver at night? When she sees Civil War photographs featuring a Union officer who looks exactly like Caleb, she begins to understand the man she is falling in love with harbors multiple secrets–some of which threaten the possibility of their happiness.

Finding a decent guy who’ll commit is hard enough. How can she expect Caleb to forsake his own century to be with her?

Intrigued? I hope so! 😀 I fell in love with Caleb while writing this story and would love to share his tale with you.

Finally, in closing, because it’s Mythical Monday on my blog, I hope you enjoy these snippets of folklore related to werewolves:

Most people know that being bitten by a werewolf will transform you into one at the rise of the first full moon. It’s also common legend that someone can willingly become a werewolf through the use of sorcery or by making a pact with the devil. But here are a few less commonly known ways of getting your (were)wolf on:

Being the seventh son of a seventh son
Through cannibalism (can I get an ewwww on that one, please?)
If you’re Catholic, failing to go to confession for a 10-year period
By drinking from the track or footprint of another werewolf
By drinking water haunted by the dead
By eating a wolf’s brain (second ewwww!)

USE THE RAFFLECOPTER LINK BELOW, comment WITH YOUR EMAIL ADDRESS, and tell me what most attracts you to werewolves. I’ll select a winner through random.org at the end of the hop and award an ebook copy of WEATHERING ROCK, Kindle or Nook (winner’s choice).  I also invite you to like my Facebook Author Page and/or follow my blog by email by using the subscription option in the top right corner of the side bar. Either ‘twould make me very happy! 🙂

Don’t panic if your comment doesn’t appear immediately. Moderation is on, but I promise your remarks won’t be lost and will materialize as soon as I check in. 🙂