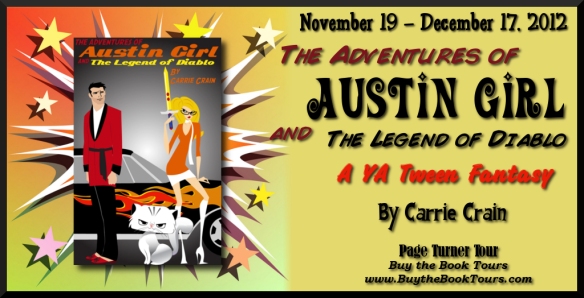 I am excited to welcome author Carrie Crain as she celebrates the release of her delightfully charming tween novel THE ADVENTURES OF AUSTIN GIRL AND THE LEGEND OF DIABLO.

Austin Girl is adorable, smart and feisty. She is thirteen going on twenty and she is thrown into a dystopian world where disco rules and the air reeks of polyester. Let’s talk about the songs in the novel and the songs Carrie listened to while writing this zany book.

Carrie compiled her official list of songs that she actually listened to while writing her debut children’s novel, THE ADVENTURES OF AUSTIN GIRL AND THE LEGEND OF DIABLO. If I had thought about it, I would have asked her to include the food she ate. LOL. LOL.

Chapter 1: The Kidnapping
El Paso by Marty Robbins
Drifter by Slyvia
Should’ve Been a Cowboy by Toby Keith
Lucky One by Raul Malo

Chapter 2: Austin Girl
Theme from the Mary Tyler Moore Show by Sonny Curtis
Love in the First Degree by Alabama
Ready for the Storm by Kathy Mattea
Jackson by Johnny Cash and June Carter
Crying by Roy Orbison

Chapter 5: The Samurai Sword
Theme from Halloween by Orlando Pops Orchestra & Aleksander Santi
Gimme Some Lovin’ by Spencer Davis Group
Cowboys and Angels by George Michael
Don’t Stop ‘Til You Get Enough by Michael Jackson

Chapter 6: Mystery Trunk Person
Who Are You by The Who
I Can Feel Your Heartbeat by The Partridge Family
Flying High Again by Ozzy Osbourne
In-A-Gadda-Da-Vida by Iron Butterfly
Disco Duck by The Hit Crew
Hotline by The Sylvers

Chapters 7 & 8: The Geisha and Madame Ursa
Gypsies, Tramps and Thieves by Cher
Dark Lady by Cher
I’d Wait a Million Years by The Grass Roots

Chapter 9: Contacting All Diablos
Wishing On a Star by Rose Royce
No Way Out by Jefferson Starship
Under the Milky Way by The Church

Chapter 10: Hot Rod Custom Style
Dance, Dance, Dance by Countdown
I Only Have Eyes for You by The Flamingos

Chapter 11: Star and Harold
Space Age Love Song by A Flock of Seagulls
Fly Me to the Moon by Frank Sinatra
Wild Flower by The Cult

Chapter 12: Demon in Disguise
I Love the Nightlife by Alicia Bridges

Chapter 13: The Game Room
Light My Fire by The Doors
She’s Not There by The Zombies

Chapter 14: The Hovels
Loves Plus One by Haircut 100
More, More, More by Andrea True
No Time by The Guess Who 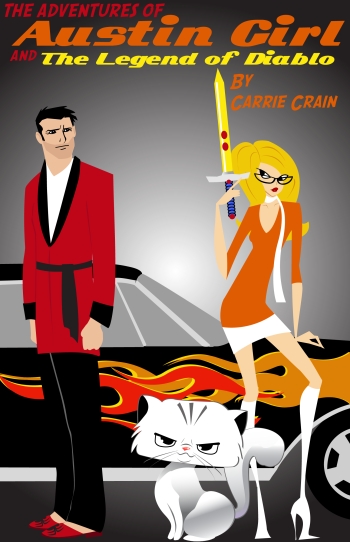 THE ADVENTURES OF AUSTIN GIRL AND THE LEGEND OF DIABLO

EXCERPT:
Chapter One
The Kidnapping

The sound of a backfire rattled store windows on the downtown street as Lucky Stevens parked his piece of hippy junk on the East side of Lucky’s Antiques located at 13 Concho Avenue. He drove a flower power Volkswagen bus. The bus was one of those rare 23 windowed jobs with curtains—a residence on wheels. Straightening his suspenders, he stepped out into the dusty landscape, newspaper in hand. He moseyed past a 1960 black Chevy Pie Wagon parked up ahead, admiring the car. The hot rod was decked out custom style with red and orange flames painted horizontally across the sides and hood. He tipped his beaver Stetson hat to the female driver and grinned handsomely. The pink-haired woman was preoccupied with talking to a Magic 8 Ball and didn’t notice the fifty-year-old cowboy.

Scratching his chin, he leisurely strolled up to a period oak and stained glass door. He reached in his Wrangler jeans front pocket and extracted a set of keys. He put the key in the lock and opened the door to a familiar sight. His antique store was housed in a red brick building in Checkered Past, Texas. He could sniff out valuable antiques just by employing his sixth sense. Lucky adjusted his string tie that matched his belt that matched his ostrich quill boots. He was in love with ‘vintage everything’ including his clothes and gentleman accouterments. Ambling through the door, he removed his Panama Jack sunglasses. His gait was deliberate, like a sore racehorse. Bells jingled like rowels on a spur letting out the sounds of commerce. Lucky may have been a little deaf, but he wasn’t so deaf that he couldn’t hear money jingle in the pockets of those who entered into his world. Lucky flipped on the lights and made a silly face at the store’s security camera.

Lucky laid his morning Austin American-Statesman newspaper down on the cracked countertop beside the turn of the century cash register, and looked at the time on his 40 year-old Rolex he’d won in a bidding war at an estate sale of one of Lyndon Johnson’s cousins so many years ago. It was still early for shoppers, just a little half past seven a.m. on Friday.

A set of white pine plank stairs off to the side began to creak. They led to the attic. Lucky housed antiques there that were part of his private collection, including one secret item in particular that oddly wasn’t for sale. He ditched his attention to the paper and walked over to the bottom of the stairs, looking up into the darkness. “Skinny, you up there?” Lucky hollered sharply. His young stock boy didn’t answer. Shrugging, he turned around to walk off. A thump on his noggin sent Lucky crashing to the hardwood floor. His Stetson flew off of his gray haired head and skidded across the floor like ice on marble. Staggering to his feet, he rubbed the back of his head. “What the—?” 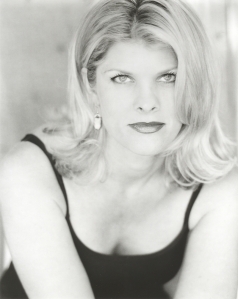 Want to purchase Carrie’s novel, The Adventures of Austin Girl and the Legend of Diablo? Buy it here: 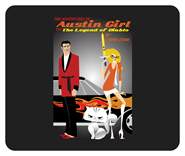 Contest Time!
Make sure you stick around and comment. Follow @CarrieCrain and @LegendofDiablo for double the chances. We’ll be giving away a copy of THE ADVENTURES OF AUSTIN GIRL AND THE LEGEND OF DIABLO either in paperback or e-book (winner’s choice) and a mousepad depicting the novel’s cover. How fun is that?!

What weapon is Austin Girl holding on the novel cover?
What animal is on the book cover?

The contest ends at sunrise tomorrow. So, get going!!