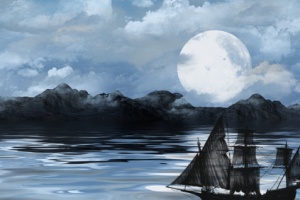 The Twelfth Sun is a fictional nineteenth century schooner and the name of my latest novel. I just signed a contract with my publisher, Lyrical Press, last week for an anticipated release of August 2013. I’ll be diving into pre-edits any day now. It feels good to be starting the publication process all over again before WEATHERING ROCK is released on October 8th. This time, I know the ropes and have a better idea of what to expect.

So I thought I’d share a glimpse of TWELFTH SUN, because I’m sure to be blabbering about it in the weeks and months ahead.

Although there aren’t any paranormal elements in this one (shocking, I know), it is brimming with mystery. A contemporary romantic suspense story, it involves the hunt for a valuable journal belonging to a shipboard representative who was a passenger on the Twelfth Sun when she sank in 1836. Several antiquities collectors are vying for possession of the journal including my heroine’s housebound uncle, Gavin.

uncle’s behalf but, because she knows nothing about marine artifacts, Gavin asks her to coordinate with his friend, Dr. Elijah Cross.  Reagan agrees, expecting the marine archeologist to be old and stodgy.  Instead, she gets a twenty-five year old genius with a Ph.D., quirky personality, and drop-dead gorgeous looks that make her forget she’s a respectable thirty-five her old business owner.

Their initial encounter is a disaster and, when they arrive at Sothern’s seaside mansion, they find themselves in competition with several other collectors for the journal.

Circumstances go from bad to worse when Sothern announces a competition ‘treasure hunt’ to decide who will ultimately walk away with the journal. As a result, Reagan is forced into working with Elijah in solving a series of riddles that begin to form a mysterious pattern. Complicating matters, her brilliant hunky partner is as gifted in seduction as he is behind the lectern, and her resistance only goes so far.

Intrigued? Dang, I hope so!

This was a fun story to write, especially coming up with the riddles. I know Six Sentence Sunday is vanishing from the radar at the end of January, but I’ll be sharing snippets of TWELFTH SUN one way or another.  And, ooooh, I do love nautical superstition and folklore, so expect some Mythical Monday posts in that vein.

From werewolves and time travel, to shipwrecks and mystery, works for me. I hope it does for you too! 😀

20 thoughts on “Mae Clair: What is the Twelfth Sun?”