Welcome to another Thursday Thirteen!  Last week I blogged a list of my thirteen favorite male characters, so it’s only fair this week is devoted to the ladies. In the process of putting this post together, I discovered something interesting.

It was effortless to come up with thirteen heroes (I could have easily added more without difficulty) but, when it came time to pick heroines, I had to do some digging. I even poked around in my bookcase, and realized that while there were titles I could look at and confidently say I enjoyed a great deal, I couldn’t remember much about the heroine. Wow! That was an awakening.

Maybe I just like a hunky hero, and gravitate more toward the men. Don’t get me wrong. There are women on the list below I adore. Others are there to round things out to an odd thirteen. That said, here are my thirteen favorite female characters (in no particular order):

So, I learned a lesson. I need to pay more attention to the women, instead of drooling over the men! The first five women on the list were heroines who made a strong impression on me. Coming up with some of the others has made me want to go back and re-read their stories, particularly THE LYMOND CHRONICLES and A TALE OF TWO CITIES. 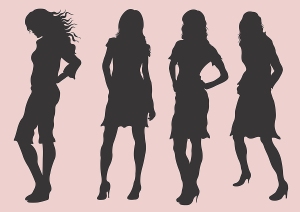